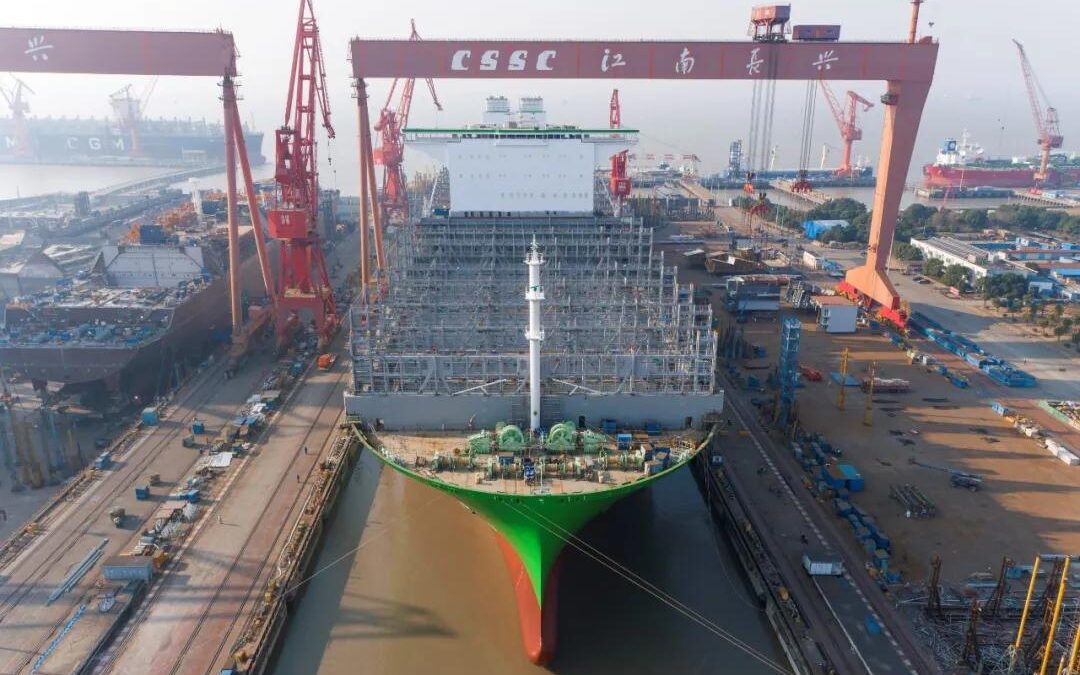 For the first time a container ship will pass the 24,000 TEU mark. Hudong Zhonghua Changxing Shipbuilding, part of the China State Shipbuilding Corporation, has floated Evergreen’s Ever Alot. With a rated capacity of 24,004 TEU, it surpasses the 23,992 TEU Ever Ace.

The new record holder is 399.99 metres long, 61.5 metres wide, and 33.2 metres deep. It features a Hudong designed bulbous bow, scrubber technology, large-diameter propellers and energy-saving ducts and will be Tier III compliant. Once delivered (expected this spring), it will sail for Evergreen’s Panamian subsidiary GreenCompass Marine.

The Ever Alot is part of the Evergreen A class, which is a series of fourteen container ships. Six of these were ordered with Samsung Heavy Industries in South Korea, four of which are already in service (the Ever Ace, Ever Act, Ever Aim and Ever Alp).

The other eight have been ordered with China State Shipbuilding Corporation and are still under construction. Four will be built by Jiangnan Shipyard (the first two will be named Ever Apex and Ever Atop) and the remaining four (three still to be named), including the Ever Alot, by Hudong Zhonghua.

Back in 2020, Hudong Zhonghua had its dock lengthened from 520 to 660 metres to meet the requirements of 24000 TEU container ships. The organisation is capable of producing five to six ultra-large container ships a year. So far, the shipyard has built more than sixty vessels over 8000 TEU. In 2021, six container ships were delivered. At present, the company is building nineteen large container ships with deliveries scheduled up to 2025.