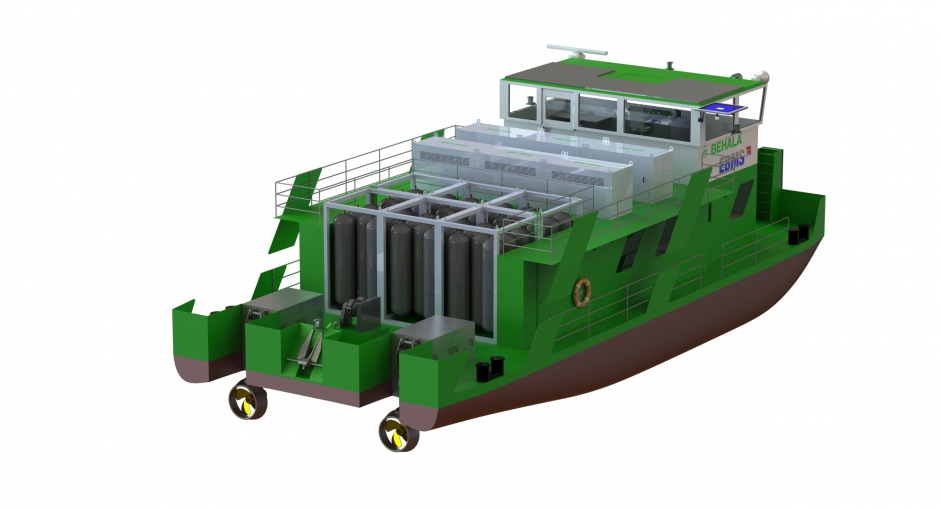 After almost two years of construction at the Hermann Barthel shipyard in Derben and the three-day transfer to Berlin’s Westhafen, the testing of the innovative and emission-free push boat Elektra has now begun. The hydrogen-fuelled Elektra will serve as a role model and its energy system is designed to be transferable to a wide range of inland and coastal vessel types.

The vessel was delivered for testing on 8 December. The tests will initially take place primarily in Berlin, from 2023 the tests will then also be continued increasingly in long-distance traffic towards Hamburg.

The project is not just about providing energy for the ship’s propulsion. The push boat has its tasks in pushing convoys, but at the same time the crew lives and resides on board. So in addition to the main propulsion, energy must also be provided for the accommodation.

All this has to work with a limited amount of energy carried and without loss of range. The waste heat from the fuel cells is used through consistent water cooling and the rooms are heated via a water-water heat pump; the advantage here is that the ship always has water available with temperatures above 0°C under the keel.

The basis of the newly developed hybrid system is the battery package, consisting of 242 DNV-GL approved GO1050 modules with a total capacity of 2.5MWh, delivered by EST-Floattech, as well as three maritime fuel cell systems (NT-PEMFC, 100kW peak power each). The use of a self-developed energy management system and a driving assistant support the skipper and logistician in planning the operations and carrying out the transports.

With 750 kg of usable gaseous hydrogen at a pressure of 500 bar on board and a battery capacity of 2500 kilowatt hours, the ship has a range of approximately 400 kilometres in a pushed convoy with the loaded heavy-lift lighter Ursus. This allows it to sail from Berlin in the direction of the Rhine/Ruhr, Hamburg and Szczecin, while it only needs one further shore station on the way in addition to the Westhafen to supply the Elektra with hydrogen and electricity.

The Elektra’s most important transportation task will be carrying Siemens turbines, which need to be shipped from the production site in the center of Berlin to the Western Harbor or to Hamburg.

Both in Berlin’s Westhafen and in the port of Lüneburg, the first shore stations for the hydrogen tanks and the charging current in the required power class of 500 kilowatts will be put into operation in 2023.

The EBMS department of the Technical University Berlin has concluded a supply contract with the Industrie- und Gewerbepark Mittelelbe/H2 Green Power & Logistics for filling and transporting the tank systems (Multiple Energy Gas Container – MEGC) with green hydrogen until the end of the project term at the end of 2024.

The MEGCs can be exchanged with the on-board crane and the power connection is made via a charging gallows where the cables are routed on shore.

Watch a video about the construction of the Elektra (in German) below.