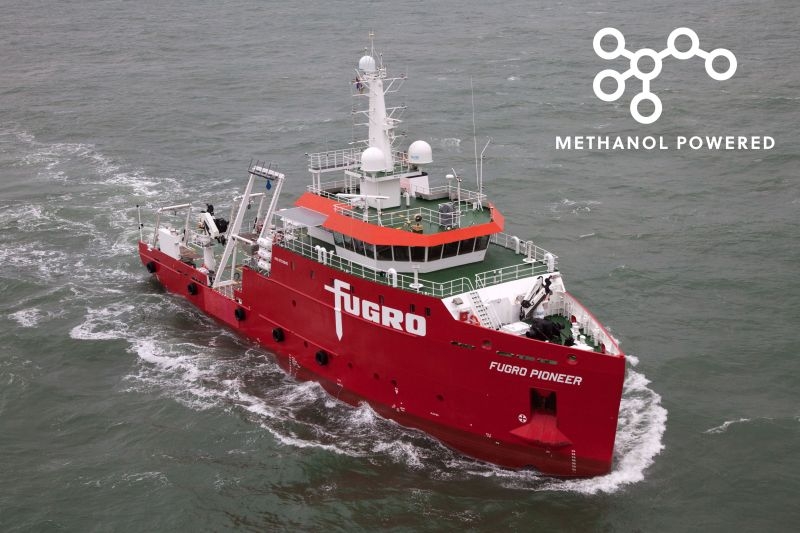 The Dutch national R&D Mobility (RDM) subsidy scheme has awarded € 52.9 million to three maritime research projects. They are: Methanol as an Energy Step Towards Zero-Emission Dutch Shipping to accelerate the uptake of methanol, SH2IPDRIVE, which seeks to do the same for hydrogen, and LNG-ZERO, which plans to tackle the emissions of LNG-powered ships.

A broader maritime consortium led by Fugro has been awarded a € 24 million grant to conduct research into accelerating the use of methanol as a low-carbon marine fuel. Methanol can enable significant reductions in CO2 emissions compared to traditional fuels and is viewed within the international maritime sector as one of the most feasible “clean” fuels for large-scale adoption by the industry.

The programme is entitled Methanol as an Energy Step Towards Zero-Emission Dutch Shipping (in Dutch abbreviated as MENENS) and is sponsored by the Dutch Government’s Netherlands Enterprise Agency. The research project aims to develop clean energy technology with a high degree of flexibility and broad applications within the shipping industry, from yacht building to offshore work ships and high-powered dredgers.

The total research budget amounts to approximately € 38 million. The consortium will retrofit six different vessel types to test the viability of methanol fuel systems. Among the retrofits is Fugro’s Fugro Pioneer (pictured). This vessel will sail on methanol from 2023.

As one of the participants, Peter Berdowski, CEO of Boskalis, says: ‘Alternative fuel types are the most significant driver for developing a more sustainable maritime industry and we continue to be at the forefront of initiatives exploring the emission-reduction potential presented by methanol and other clean technologies. This research programme looking into the use of methanol as a low-carbon fuel is another important step along the road to realising the net-zero objective.’

SH2IPDRIVE (Sustainable Hydrogen Integrated Propulsion Drives), a Dutch project consortium focused on maritime hydrogen applications, has been granted a € 24.2-million subsidy of the RDM Fund. SH2IPDRIVE consists of a diverse group of 25 companies and knowledge institutions from across the maritime sector working to accelerate the introduction of hydrogen as a marine fuel.

Developing the application of hydrogen is one of the pillars of the Dutch Maritime Master Plan, to which this consortium contributes extensively. The total project fund of € 34 million affords extensive research and development into multiple hydrogen applications and accelerates the move to zero-emission shipping.

The project boosts hydrogen knowledge and lays the foundation for a strong maritime hydrogen economy in the Netherlands. The results align entirely with the objectives formulated in the Dutch Maritime Master Plan, aimed at strengthening the position of the Netherlands as a world leader in sustainable shipbuilding and shipping.

‘We already know that hydrogen can be produced completely carbon-free through green electricity. With the electrochemical conversion of hydrogen in a fuel cell, power can be generated on board to drive ships fully emissions-free with no greenhouse gases, nitrogen oxides, or particulate matter being released. However, to achieve a fully zero-emission shipping sector quickly and cost-effectively, a lot more research is required in optimal techniques, applications and standardisations,’ explains Marjon Castelijns, Manager Business Development of Future Proof Shipping (FPS), which coordinates the project.

The main objective of SH2IPDRIVE is the development of reliable, safe, standardised, scalable and cost-effective solutions for zero-emission propulsion and energy systems for hydrogen-based ships. It will conduct new research into the development of safe applicable technologies for hydrogen in four different forms: (1) compressed hydrogen gas and (2) liquid hydrogen, and hydrogen bound to carriers such as (3) liquid organic hydrogen carriers and (4) borohydrides.

Another main area of exploration for the team is research into new fuel cell systems with a greater power density and a longer lifespan, the use of residual heat and the scaling up of fuel cells. The team will also work on developing technical standards for bunkering and storage of hydrogen for shipping, integration of hydrogen technology on board ships and ship design. For this purpose, data collection and system validation are included in the project and the integral safety concept of these new systems is also taken into account.

The consortium of 25 parties is made up of companies, universities, knowledge institutions and the Dutch Government. Among the members are Delft University of Technology, Nedstack Fuel Cell Technology, MARIN, Holland Shipyards, TNO, Royal IHC, Concordia Damen and the Dutch Defence Materiel Organisation. SH2IPDRIVE’S total project budget is € 33.6 million, including the 24.2-million subsidy and the partners’ own resources of € 9.4 million.

The LNG-ZERO project includes the development of a complete cycle for the application of an advanced LNG-ZERO concept, which was originally introduced by TNO. The project is now being coordinated by VDL AEC Maritime and combines efforts of the energy and infrastructure developers (Shell, Carbon Collectors, end users (Heerema, Anthony Veder) and important suppliers and system integrators (VDL AEC Maritime with Carbotreat, Conoship International).

TNO, along with the technical universities of Twente and Delft, are the research partners working on the eco topics. Safety and performance standards will be developed in conjunction with Lloyd’s Register.

LNG-ZERO is an ambitious research project with the aim of developing the technologies and strategies needed to drastically reduce emissions from LNG-powered ships and thus contribute to sustainable shipping. This is achieved through a three-pronged strategy: reducing methane (CH4) slip, capturing carbon dioxide (CO2) and using bio-LNG to eliminate all remaining emissions, making the entire chain free of greenhouse gas emissions.

The technologies for capturing carbon and reducing N-emissions can also be applied for ships running on conventional fuels.

The companies working on this project have created a budget of € 6.1 million, on which the Dutch government has granted a subsidy of € 4.4 million. The research is a first step to sustainable shipping as is written in the Dutch Maritime Masterplan, with a goal to realizing a emission-free shipping industry.