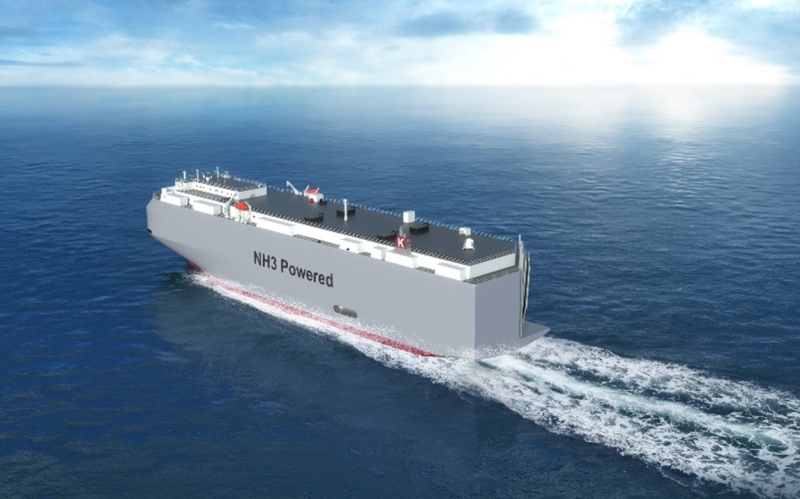 Classification society ClassNK has issued an approval in principle (AiP) to Kawasaki Kisen Kaisha (“K” Line) and Shin Kurushima Dockyard for their jointly developed design of an ammonia-fuelled pure car carrier. The design incorporates safety measures to deal with the toxicity of using ammonia as a marine fuel.

Ammonia is expected to be used as a decarbonised fuel for ships since it does not emit CO2 when burned. However, using ammonia to power a ship requires adequate safety measures due to its being toxic to humans and corrosive against materials.

Guidelines on safe use of ammonia

While international standards for using ammonia as a ship fuel are yet to be developed, ClassNK published its “Guidelines for ships using alternative fuels” in August 2021 to minimise the risks related to ammonia-fuelled ships for the ship, crew, and environment by stipulating requirements for installation, controls, and safety devices. Examples of the measures described in the guidelines are:

In terms of flammability measures are needed to make sure that electrical equipment in hazardous areas is explosion-protected. When it comes to toxicity, toxic hazardous areas and non-toxic hazardous areas are to be properly separated and ammonia gas is to be emitted from a safe place. Measures are to be taken to control, detect and automatically shut off leaked ammonia once detected. In addition, measures need to be taken to prevent the inflow of ammonia gas through ventilation ducts and air intakes and exhausts. For crew, using ammonia as fuel means there need to be decontamination showers and eyewash stations on board.

For challenges related to toxicity when using ammonia as ship fuel, ClassNK, along with “K” LINE and Shin Kurushima Dockyard, has assessed and investigated the safety measures against the potential leakage risks of ammonia. ClassNK has carried out the design review in line with the Guidelines and issued the AiP upon confirming that the design meets the requirements.

Also read: Wärtsilä and Eidesvik to convert offshore vessel to run on ammonia