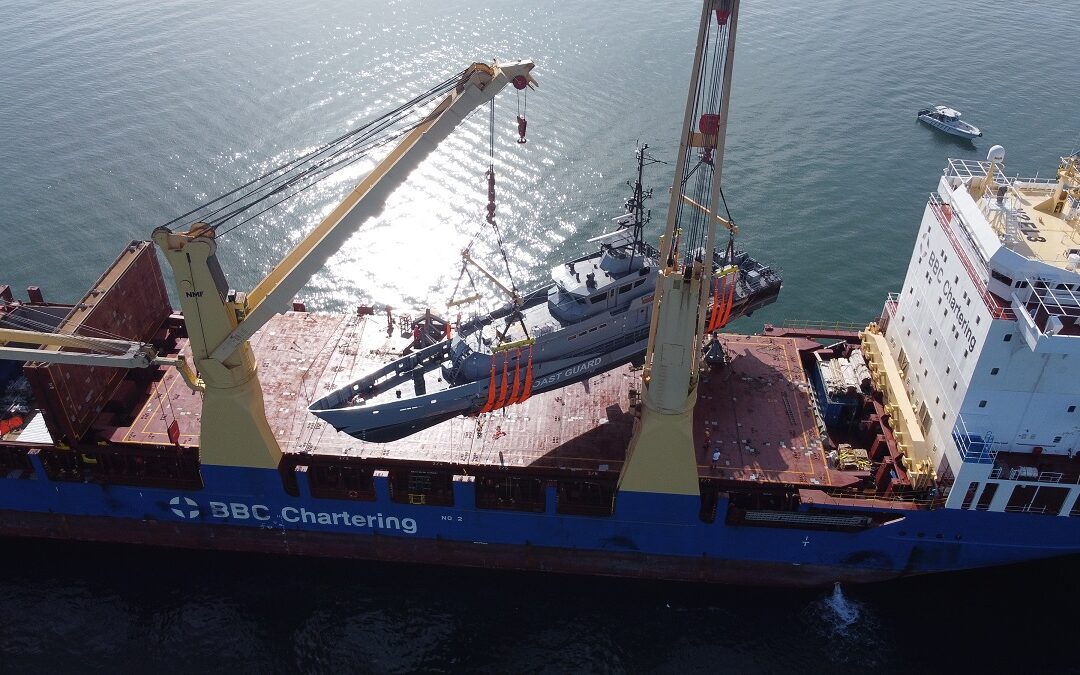 A Damen Stan Patrol (SPa) 4207, the second in an order of four for the Jamaica Defence Force Coast Guard, has officially been handed over in Kingston, Jamaica. Due to Covid-19 travel restrictions, the vessel had to be delivered by general cargo vessel BBC Congo.

Construction on the vessel had already begun when the global pandemic struck and the rapid spread of the virus meant that upon completion of the vessel, pandemic travel restrictions made it unfeasible to arrange a crew to deliver it on its own keel since the crew would not be permitted to return to their home countries once they arrived in Jamaica.

Not to be deterred, the Damen Services vessel delivery teams worked to devise an alternative arrangement. The vessel left Damen Song Cam Shipyard in Vietnam, not on its own keel as is usual for this model, but on board the BBC Congo, a heavy transport vessel.

The SPa 4207 was loaded in Hai Phong Harbour in June 2021. Covid measures prevented Damen’s heavy lift team from being present to supervise its loading, but a local team was called upon to ensure the vessel was carefully loaded and properly secured. Once final checks had been made, the BBC Congo sailed east across the South Pacific and through the Panama Canal, before arriving, just under two months later, in Kingston, Jamaica.

On the morning of its arrival, the Jamaica Defence Force’s new vessel was offloaded and, with a support fleet of smaller craft, was delivered to its base nearby. Due to changes in travel restrictions, Rimmert Berlijn, Service Coordinator, Delivery, Damen Heavy Lift, was able to safely travel to Jamaica to coordinate the logistics and supervise the offload.

The four-vessel contract between Damen and the Jamaica Defence Force saw the delivery of a FCS 5009 Patrol in 2020. Another SPa 4207 and a second FCS 5009 Patrol will be delivered in the years to come.