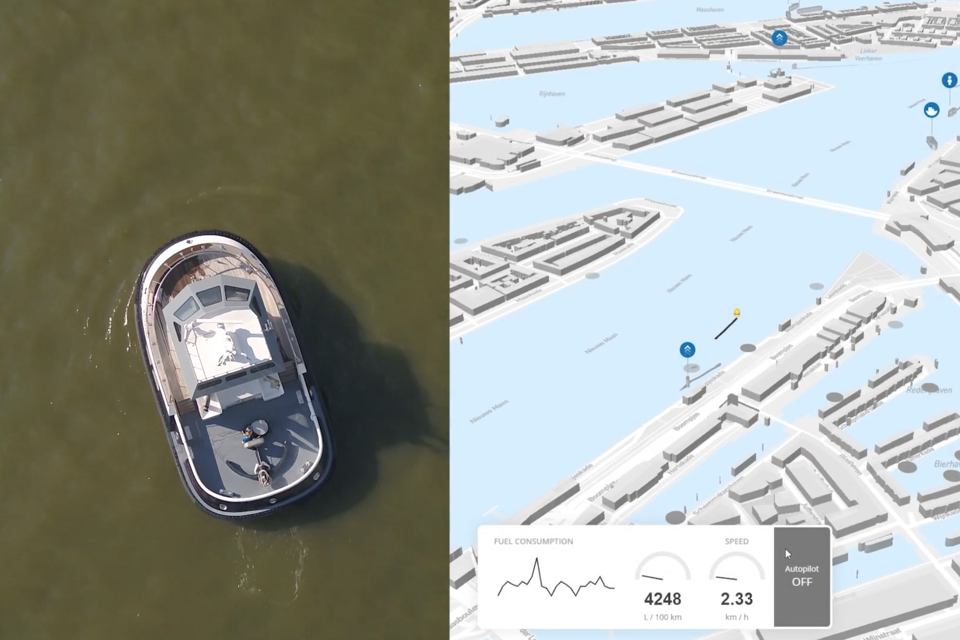 Kotug International, Rotortug, and Captain AI have demonstrated the first boat in the world that sails the most optimal route without human intervention. Tug RT Borkum autonomously sailed on the river Nieuwe Maas in Rotterdam using the Captain AI Route Planner and Autopilot.

‘The route planner can be seen as the “Google Maps” for waterways,’ says Vincent Wegener of tech start-up Captain AI. ‘It calculates the route, which the boat then autonomously sails, using our autopilot software.’ The demonstration was given at the Smart Shipping event on Monday 21 September of the Netherlands Forum for Smart Shipping.

To define the route along the Nieuwe Maas as efficiently as possible, Captain AI’s software is connected to the Kotug Optiport dispatch planning software, enabling optimised route planning in real-time, based on AIS data and Artificial Intelligence.

Patrick Everts of maritime service provider Kotug: ‘The digital captain has to know what the vessel’s destination is and how to get there in the most efficient way. Linking Captain AI’s software to OptiPort is not only making the skipper’s life easier because vessels can autonomously navigate the optimal route, but is also saving on fuel and CO2 emissions.’

Ship design company Rotortug’s RT Borkum has already undergone several successful operational tests in the busiest port of Europe, Rotterdam, proving for the first time that autonomous planning followed by autonomous sailing works in practice. Kotug and Captain AI have entered into a partnership to further develop and commercialise the software.

The next step is making the software suitable for large-scale applications and to explore matters such as safety and legislation, in consultation with the users and legislators.

In the summer of 2018, Kotug and Rotortug already demonstrated that it is possible to operate a tugboat in the port of Rotterdam, remotely from Marseille, France. That was the first step on the roadmap towards fully autonomous sailing. This latest demonstration is considered another important milestone for this roadmap.