Pictures show damaged Ever Given in need of a ‘nose job’ 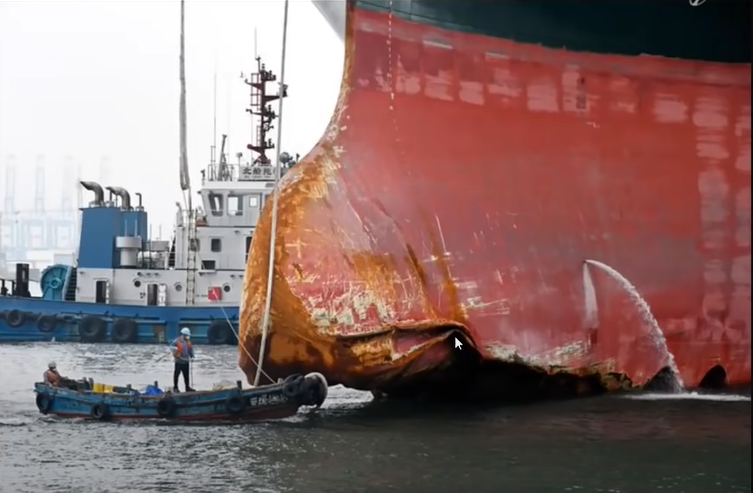 Footage circulating on Twitter and YouTube show the damage container ship Ever Given sustained after it ran aground in the Suez Canal back in March. Sal Mercogliano, Chair of the Department of History Criminal Justice and Political Science at Campbell University, says the bow had to be cut off to be replaced by a new one, referred to as a nose job.

Mercogliano says he talked to someone involved who said the bow was going to be cut off, including the thrusters and that three replacement modules were ready to be installed. According to him, a whole new lower bow section had been prepared at the yard. He adds that the nose job is considered a minor repair nonetheless. In the video below, he discusses the damage further.

Pictures also show that the hull plating separated. In addition, the side thruster was crushed and there was a crack running up from it. Qingdao Beihai Shipbuilding Heavy Industry Co., Ltd. was in charge of the repairs.

It is likely that the repairs have already been carried out or are close to completion. Shipment Link reports that the vessel is expected in the port of Qingdao on 11 November to resume its sailing schedule. From there, the Ever Given will sail to Shanghai and Yantian amongst others, before travelling to the Suez Canal, where it will arrive on 6 December. From there, it will sail on to Rotterdam with an ETA of 15 December.

Also read: Container ship Ever Given docks in China for repairs

The 20,000 TEU Ever Given became world famous in March when it grounded in the Suez Canal in a sandstorm. It took about a week before the ship could be refloated. In that time, a traffic jam of hundreds of ships ensued and worldwide trade was disrupted.

Only when an agreement was reached about the payment of compensation to the canal authority was the Ever Given allowed to leave. The container ship left the Suez Canal at the beginning of July. The vessel then anchored for several days near the port of Port Saïd to prepare for its journey to be resumed. The Ever Given finally arrived in Rotterdam on 29 July.

Picture (top): Video still from the video below, What is Going on With Shipping? w/Sal Mercogliano.