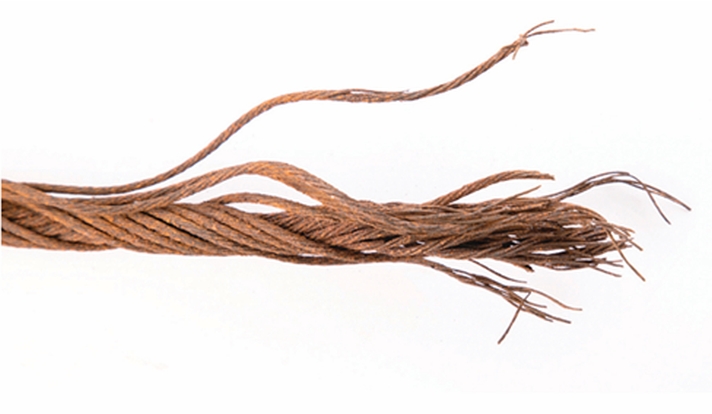 In The Nautical Institute’s latest Mars Report, it was a rescue boat that needed rescuing. The cause: a corroded wire rope. But how to assess the condition of such a rope? According to the Institute, this requires special training.

In calm seas, a vessel was stopped while underway to allow crew to undertake boat drills. While the lifeboats were tested, the rescue boat was launched and manoeuvred close to the ship by a three person crew. The rescue boat trials lasted for about an hour before the crew brought the boat alongside for recovery.

Once the hook and painter line were fastened, the crew in the boat sat on the floor in a stable manner and the hoist was started. When the boat reached the boat deck, the winch was stopped. Suddenly, the wire failed and the boat fell 17 metres, hitting the water upright. The engine was torn off its foundation, the bottom hull cracked, and the boat slowly drifted alongside the ship’s port side. All three crew members were still in the boat, but seriously injured. The alarm was immediately raised.

It was quickly decided that the best option was to use the main deck crane to hoist the boat back on board with the crew inside. It seemed that the only option was to have a crew member jump into the sea and swim to the rescue boat to retrieve the painter line, which had been lost over board when the wire broke. One crew member volunteered to don a life jacket, climb down the combination ladder and swim to the boat. Once the painter line had been retrieved, the crew on deck pulled the boat forward below the deck crane. The volunteer swimmer had climbed into the boat ready to fasten the deck crane hook to the boat.

After the hook had been fastened, he swam back to the combination ladder and climbed up on deck. Approximately twenty minutes after the boat fell into the sea, it was hoisted up to the main deck. The injured crew members were assessed and given first aid. One victim needed immediate treatment and was taken to the ship’s hospital. The next morning the vessel arrived at a port anchorage where disembarkation of the injured crew members was arranged.

Also read: Do you check the internal condition of your ship’s wire ropes?

The reason the poor condition of the wire rope was not recognised earlier was a combination of at least three factors:

In the “old” days, before rescue boats and covered lifeboats, we had lifelines to hang on to as the open lifeboat was lowered or raised. During one of my drills, the wire rope on the forward tackle snapped and all the personnel that were holding the knotted line were safe, albeit dangling from their line. The one crew that wasn’t holding the line fell down with the boat and was injured. Covered lifeboats have had many dropping accidents as well, but measures to reduce these accidents have seen some success. What additional safety precautions do we need to put in place for rescue boats that are suspended by a single wire?

Also read: Breast line breaks due to corrosion – A warning

This accident was covered in the Mars Reports, originally published as Mars 202145, that are part of Report Number 347. A selection of this Report will also be published in SWZ|Maritime’s October 2021 issue. The Nautical Institute compiles these reports to help prevent maritime accidents. That is why they are also published on SWZ|Maritime’s website.