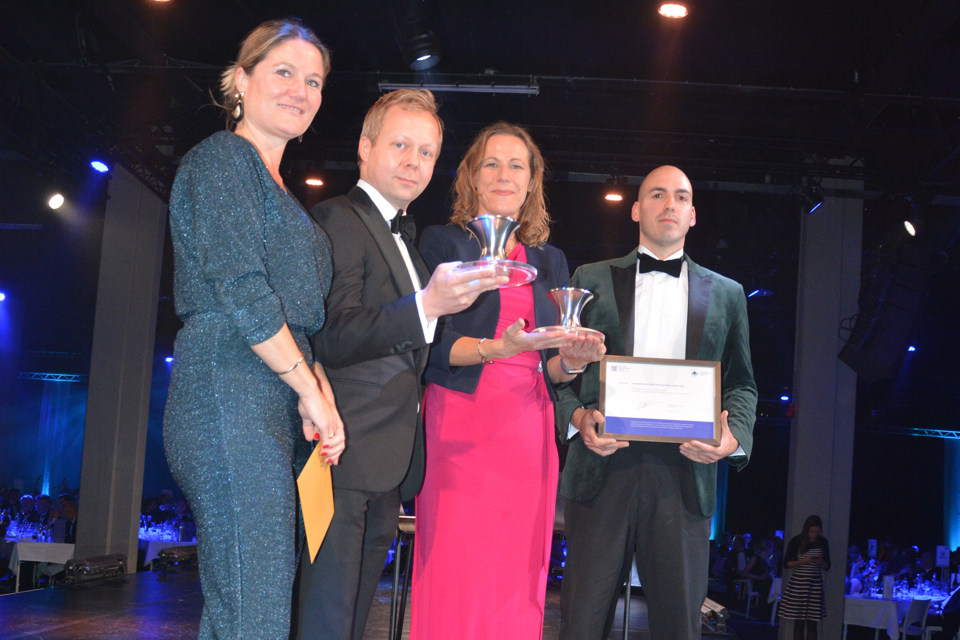 The Royal Association of Netherlands Shipowners’ (KVNR’s) has awarded its annual award to the Dutch political parties CDA and VVD for their Merchant Shipping Protection Act. This Act has made it possible for all Dutch flagged ships to make use of armed private security.

The KVNR presents its award to the organisation or person that has made a real difference for the Dutch shipping industry. For the first time, this resulted in a nominee/winner from outside of the maritime industry. The award was presented to the winners at the Maritime Awards Gala last night (4 November), in Rijswijk, the Netherlands.

Members of the VVD (Han ten Broeke and Sven Koopmans) and CDA (Raymond Knops and Martijn van Helvert) were responsible for the Merchant Shipping Protection Act (Wet ter Bescherming Koopvaardij), which was adopted by the Dutch Senate in 2019.

This Act allows for the use of armed private maritime security on Dutch flagged ships in piracy infested areas. The Dutch maritime sector had been pleading for permission to use private security for almost ten years. In Dutch terms, this is a policy innovation as the government in the past felt that all combat force should be wielded by the government. At the same time, the Act ensures a level playing field among maritime companies as other countries already allowed private security on board.

The other nominee and now runner-up is Heerema Marine Contractors together with the Port of Rotterdam Authority and Eneco. They were nominated for a green shorepower business case. The project includes the plan to build an electrical infrastructure with a capacity of twenty megawatts in the Caland Canal in Rotterdam. The energy will be generated by means of Eneco’s wind turbines. It will be the largest shorepower connection for offshore vessels in the world.

This infrastructure is to supply the HMC fleet (Sleipnir, Thialf and Aegir) with energy when the ships are in the port allowing them to stay in port without generating noise or emissions, while the vessels’ systems, including their cranes, can be operated. It is estimated that 100 tonnes of CO2 will be saved per ship per day.

The Maritime Awards Gala once again saw the presentation of five maritime awards. In addition to the KVNR Shipping Award, these were the KNVTS Ship of the Year Award, the Maritime Innovation Award, the Maritime Designer Award and the Royal Netherlands Navy (RNLN) Van Hengel-Spengler Award. Almost 900 maritime professionals, politicians and press attended the event. Honorary guest of the evening was Rotterdam’s mayor Aboutaleb.

Picture: From left to right: Annet Koster (Director KVNR) presents the award to members of the VVD (Sven Koopmans) and CDA (Wytske de Pater-Postma). On the right is a representative of nominees Heerema, Port of Rotterdam Authority and Eneco (picture by SWZ|Maritime/G.J. de Boer).