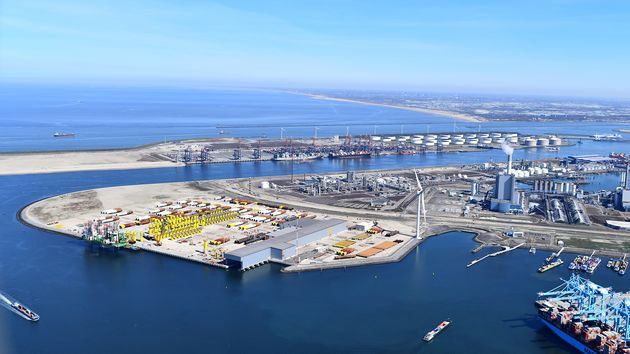 According to Allard Castelein, CEO of the Port of Rotterdam Authority, the figures demonstrate the ‘economy is continuing its upward path’. He adds: ‘The whole world was in lockdown last year because of the corona pandemic. Now factories, businesses and logistics are operating flat out again to meet increased demand. However, the extent to which growth will continue also depends on how fast acute shortages in some links of the logistics chain can be reduced. Nevertheless, the Port of Rotterdam wants to facilitate this growth as much as possible. We are committed to good jobs for current and future generations, and to future earning capacity in the Netherlands. At the same time, we are investing in the transition to a more sustainable energy system, with more green hydrogen and lower carbon emissions.’

The throughput of containers has been high since autumn 2020. Growth in the first nine months of 2021 was 7.8% in TEU and 4.0% in tonnes. Consumers are spending generously and the economy is recovering from the corona dip in 2020, with volumes being higher than in 2019. This strong demand, in combination with various disruptions in 2021 (Suez, corona outbreaks in Chinese ports), means that pressure on the logistics chain continues to be high. This also led to persistently high transportation prices.

Throughput increased faster in TEUs than in tonnes for a number of reasons. The increase in the throughput of empty containers had a minor effect. The largest effect came from the sharp fall in the average weight of full containers. Transportation prices have risen sharply in recent quarters. One consequence was that the transportation of relatively heavy, low-value, goods declined. This effect was strongest in the case of export containers but it was also seen in imports.

RoRo throughput increased by 5.2% compared with 2020.The negative impact of Brexit was apparent only in the early months of the year due to high stock levels. In Q2 and Q3 2021, demand from the UK was high and volumes were again above pre-Brexit and corona levels.

Liquid bulk, the largest segment in tonnage terms, rose by 6.4% over the first three quarters of last year to 152.1 million tonnes. The throughput of crude oil (+3 million tonnes) and oil products (+5.7 million tonnes) rose sharply. In the case of oil, one of the factors was that margins have been better for refiners in recent weeks. Refining volumes in the Netherlands in the second and third quarters were higher than in comparable quarters last year. In the case of oil products, the main drivers of growth were fuel oil, gas oil and naphtha.

Imports of fuel oil rose, especially from Russia. Production and exports from Russia were higher than in 2020. Demand for naphtha, a typical import product, was up on last year. Imports of gas oil/diesel were lower and exports were higher, especially to the United States, partly as a result of the cold spells there. Biofuels and chemical products also performed well. LNG throughput more or less matched the level in the first nine months of 2020.

Dry bulk throughput rose more than 27% compared with the first three quarters of 2020. The increase in volume was mainly in iron ore and coal. Iron ore throughput collapsed in 2020 because there was much less demand for steel due to the corona crisis. This year, on the other hand, steel production has risen sharply again. That has also had an impact on the throughput of cokes. Total coal throughput increased by no less than 48.4% over the first nine months of 2020. In particular, the demand for coal for energy production rose sharply as a result of increased demand for energy. Coal-fired power stations have been operating relatively long hours: less wind energy was produced during this period and gas was scarce and expensive.

There was a clear rise in biomass throughput by comparison with 2020, when more biomass was co-fired in coal-fired power stations. Other dry bulk rose by more than 12% compared with the first nine months of 2020. Industrial production and construction have picked up after the corona year 2020, and so demand for raw materials has also increased. Only agribulk volume remained at the same level as last year, when it was precisely the only type of dry bulk that increased. At the time, there was unusually high demand for agricultural goods due to a concern about the threat of stock shortages. This meant that the incoming volume in the last quarter was down on the previous year.

Progress was made again in the third quarter on the energy transition. For example, decisions about the zoning plan and four permit applications for the Porthos project are now available for inspection. Porthos will transport CO2 from the Rotterdam port area and store it in empty gas fields under the North Sea.

Shell has started on the construction of a plant in Pernis that will produce 820,000 tonnes of sustainable aviation fuel and renewable diesel from waste each year.

80% of the 230,000 port calls the Harbour Master receives annually have now been automated.

In September, the Port of Rotterdam Authority installed the world’s first 3D-printed steel bollards on the new quay in the Sleepboothaven at Rotterdam Heijplaat. The six bollards are part of a series of twelve 3D-printed bollards that the Port Authority and RAMLAB have developed together. The 3D printing of bollards is part of the infrastructure innovation programme in which the Port Authority aims to improve the construction and use of port infrastructure and make it more sustainable by means of scientific research, innovation and digitalisation.

Picture by the Port of Rotterdam Authority.