Incident with Liebherr crane may delay construction of Alfa Lift 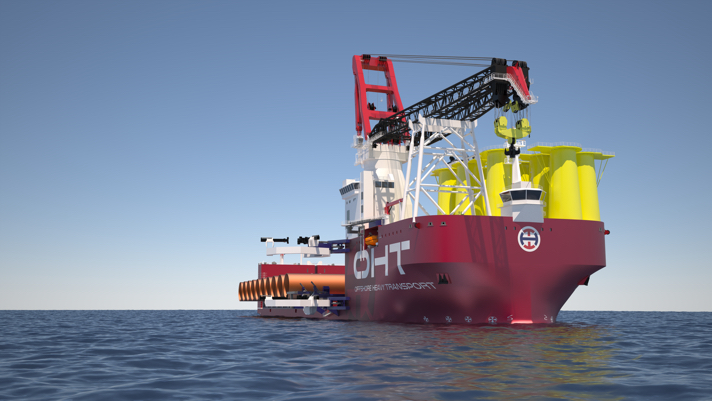 Offshore wind contractor Seaway 7 may be facing a delay in the delivery of its new heavy lift ship Alfa Lift after an incident with its 3000-tonne Liebherr crane. According to a company statement, an ‘unplanned movement’ of a key component has resulted in the need for a technical investigation.

The ship was ordered by offshore heavy transport vessel operator OHT from Oslo, Norway, back in 2018 before the company was taken over by UK-based Subsea 7 this summer. It is now part of the latter’s renewables division named Seaway 7.

The Alfa Lift is a heavy lift ship dedicated to installing the turbine foundations of the ever-larger offshore wind turbines, while leaving the remaining installation work to other specialised vessels. Ulstein’s design office in Rotterdam provided the design for the semi-submersible, which is now under construction at China Merchants Heavy Industry’s shipyard in Jiangsu.

On Monday, Seaway 7 stated it had been informed of the incident involving the folding A-frame on the Liebherr HLC 150000 crane. No personnel were injured. The cause of the incident is under investigation. Seaway 7 added that ‘the incident is a matter between the shipyard and crane vendor, and it is too early to indicate if this will have an impact on the delivery schedule of the vessel.’

The Alfa Lift has already been contracted for transport and installation of the foundations for the Dogger Bank A and B offshore wind projects in the UK. These projects will run from 2022 to 2024.

The 3000-tonne HLC 150000 offshore crane is mounted at the starboard side of the forecastle. The square part of the crane foundation fits the bulkheads of the lower structures. It is partly integrated with the deckhouses, creating a stiff foundation structure. A transition piece transforms the square foundation into circular for supporting the crane slewing bearing.

The crane consists of a crane tub, an A-frame and a lattice boom structure. Due to the tub diameter of 14 metres, the boom girders and their heel pins are wide apart, resulting in generous dynamic allowances of respectively 3.5 degrees off lead and side lead. The crane tub is mounted on the slewing bearing, supporting the A-frame base with heel pin foundations, the winch arrangement and the operator’s cabin.

The A-frame is foldable due to the hinges fitted in the corners of the triangular frame and a fourth hinge fitted in the rear leg. By dislodging the rear hinge, the leg will fold, thereby lowering the top of the A-frame. The arrangement allows the Alfa Lift vessel to meet the air draught restrictions of the Great Belt and Suez bridges (respectively 65 and 68 metres).

Additionally, the crane is equipped with several tugger winches (45 tonnes) for controlling and positioning the load. A trolley hoist is fitted below the boom for transferring small loads over deck when the crane is stowed. The crane can operate in split hook mode, lifting 1500 tonnes from each hook simultaneously. By locking one hook, a single lift can be made at double speed.

Of course the incident immediately brings to mind the accident with DEME’s new offshore installation vessel Orion 1, which also involved a Liebherr crane. In this case, the hook of the crane, an HLC 295000, failed during a load test, resulting in a whiplash effect which severely damaged both ship and crane.

Liebherr said it would repair the crane, which would be ‘completed in the course of 2021′. The HLC 295000 is the largest offshore crane Liebherr has ever manufactured. The crane was designed with the ever larger offshore wind energy farms in mind as well as dismantling of disused offshore oil and gas platforms.

The ship went to the Gdańsk Remontowa Shiprepair Yard for repairs in March. The ship has, however, left Poland and is currently in Germany, according to Vesselfinder. Pictures taken in Germany in early October show the Orion 1’s crane is yet to be installed.