‘Installation vessel Orion was whiplash proof, but its crane was not’ 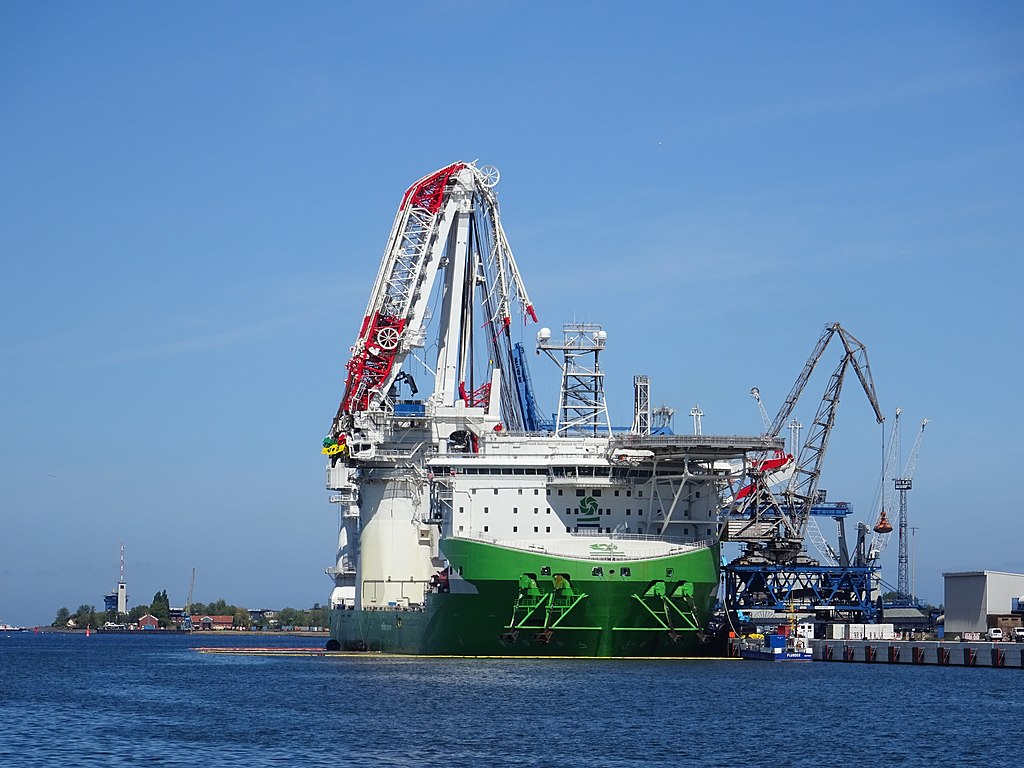 SWZ|Maritime’s offshore expert Björn von Ubisch has analysed the crane accident with DEME’s new offshore vessel Orion. His conclusion: ‘the ship could handle the “whiplash” effect, but the crane could not.’ In the meantime, Liebherr has announced it has started repairing the crane, with delivery planned in 2021.

In May 2020, the Orion 1 was in the port of Rostock after having its 5000-tonne heavy-lift Liebherr crane installed. During the test load of the crane (35 metres outreach and 175 metres hoisting height), the hook collapsed with the result that the complete crane collapsed.

The test load was a barge filled with water to be lifted on the starboard side, the side where the pedestal crane is mounted. Maximum capacity of the crane is 5000 tonnes, the maximum test load was 5500 tonnes and the test load at the incident was 2600 tonnes. Prior to testing, the vessel was counter-ballasted to about 5 degrees to portside.

Von Ubisch adds: ‘One danger with all hoisting operations is “loss of load”. If counter-ballasting is used, then there is always a chance of losing stability in case of a sudden loss of load and the subsequent “whiplash” effect, which may result in the vessel capsizing. In this case, the vessel stayed upright and was only listing a bit to port due to the counter-ballasting.’

The crane, however, was severely damaged. The hook collapsed and the barge fell back into the water. ‘The crane boom was raised to maximum pitch, minimum outreach and was pointing more or less vertically to the sky,’ explains Von Ubisch. ‘When the load was lost, the ship heeled over to portside and the boom tip swung over its equilibrium and got caught on the A-frame, part of the frame structure, and the boom collapsed as well. This shows the crane could not handle the whiplash.’

No separate testing of the hook

The cause of the crane losing its load, was the crane hook, the stem of which broke during the test. Photos of the vessel after the incident reveal that the “horns” of the hook were missing.

Von Ubisch: ‘It can be assumed that the hook was never separately load tested in the factory, as it collapsed at about half the maximum load (safe working load, SWL). Many organisations do that and some even demand it. As an example, the Norwegian Maritime Authorities and Lloyd’s Register’s “Code for lifting appliances in a marine environment” require separate testing of “loose components” like hooks, wires and sheaves. An enquiry at Huisman reveals that Huisman always factory tests its hooks prior to installation.’

Liebherr had ordered the crane hook from a third party. This turned out to be Dutch Ropeblock, which provided the design of the crane’s lifting blocks, including the crane hook. Manufacture of this crane hook was then purchased from a certified supplier who according to Ropeblock was familiar with parts of similar and larger sizes. Ropeblock also stated the design had been verified by the authorised Notified Body.

On 14 September, Liebherr announced it would repair the HLC 295000 crane. The crane is to be completed in the course of 2021 and the preparations for the recovery of the crane are now in full swing.

‘At times like these, partnerships show how well they function. Although the events around May 2, 2020 have affected us, we are convinced of the high quality of our products,’ said Leopold Berthold, Managing Director at Liebherr-MCCtec Rostock GmbH. ‘Thus, we will rebuild the HLC 295000 and successfully complete this project together with our partners.’

The heavy lift company Sarens has been assigned with the salvage of the damaged components of the HLC 295000. In coordination with the port authority, the port operator and Liebherr, the salvage concept will be refined and put into practice in the coming weeks.

In highly simplified terms, the salvaging can be split into three phases. Since the crane cannot be salvaged directly on site, the first stage involves appropriate safeguarding of the scene of the accident in order to safely shift the vessel to Berth 25 in the international Port of Rostock.

In phase two, the insecure components shall be recovered to ensure controlled and safe dismantling of the crane during phase three. The salvage work is expected to start in September.

Comprehensive repairs are necessary during the coming months in order to put the heavy lift crane back into operation. According to the current information both the 145-metre long boom and parts of the A-frame will be completely newly manufactured. The necessary steel construction work will also begin in September at the Liebherr plant in Rostock.

The HLC 295000 is the largest offshore crane Liebherr has ever manufactured. The crane was designed with the ever larger offshore wind energy farms in mind as well as the trend of dismantling disused offshore oil and gas platforms from which large and heavy parts have to be disassembled in open seas.

Picture: Orion with collapsed crane in the port of Rostock (by Entbert).