‘Communication is key during mooring’ 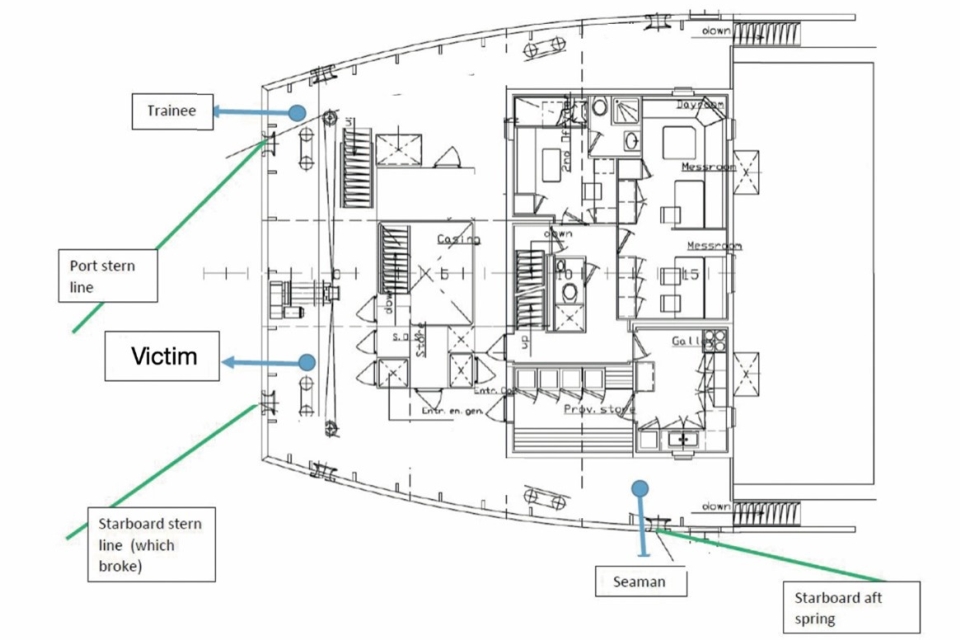 The Nautical Institute discusses another fatal mooring accident in its latest Mars Report. In this case, a lack of communication and a cluttered deck led to a stern line getting caught in the propeller, which then snapped and hit a crew member.

A small coastal cargo vessel had discharged in port and was shifting berth. The master, controlling the vessel, was in visual and verbal contact with the officer on the bridge wing on the starboard side. Due to the construction of the vessel, they could see the crew members on the foredeck but not those on the aft deck – two ABs and a trainee.

Contact was maintained with one AB and the trainee on the aft deck via VHF radio. The other AB on the aft deck was not equipped with a similar radio. The planned manoeuvre was unexceptional and was one regularly carried out. The weather conditions were good.

Both ABs were experienced in carrying out mooring operations and berth changes. The procedure for this operation specifies that the aft deck must be manned by two crew members. The day before the accident, the trainee had been deployed on the foredeck, but on this occasion he was stationed on the aft deck for the first time, under the supervision of the ABs.

The three crew members on the aft deck stood relatively close together, but were not in each other’s field of vision. Due to the background noise caused by the engines, verbal communication was difficult. Each was responsible for releasing and re-securing a mooring line: the AB on the aft starboard side was responsible for the stern line on that side; the trainee for the stern line on the port side; and the other AB for the aft spring on the starboard side. Because of the short distance to be covered during the berth change, the mooring lines were not coiled on the storage drums during the manoeuvre, but left loose on deck.

The aft starboard spring was paid out and then secured. The master then instructed the AB with the radio to slightly slacken the spring to allow the vessel to go astern a further 5 metres. As the AB worked the aft spring to give it slack, the two unsecured stern lines started running quickly into the water. The AB stopped the starboard stern line from running out, but due to the sternway of the ship, this line become entangled in the propeller. It quickly came under tremendous tension and then failed. The AB was hit by the recoiling section of the mooring line.

The alarm was sounded and first aid was administered immediately and an ambulance was called. In an attempt to stop the severe bleeding caused to one of the victim’s legs, a tourniquet was applied. About forty minutes later, the victim was evacuated by ambulance, but by that time the victim had fallen unconscious. The victim died in hospital later that day.

Advice from The Nautical Instute

Also read: Can you spot the mooring rope errors?

This accident was covered in the Mars Reports, originally published as Mars 202142, that are part of Report Number 346. A selection of this Report will also be published in SWZ|Maritime’s September 2021 issue. The Nautical Institute compiles these reports to help prevent maritime accidents. That is why they are also published on SWZ|Maritime’s website.