Wear a lifeline when working on deck in heavy weather 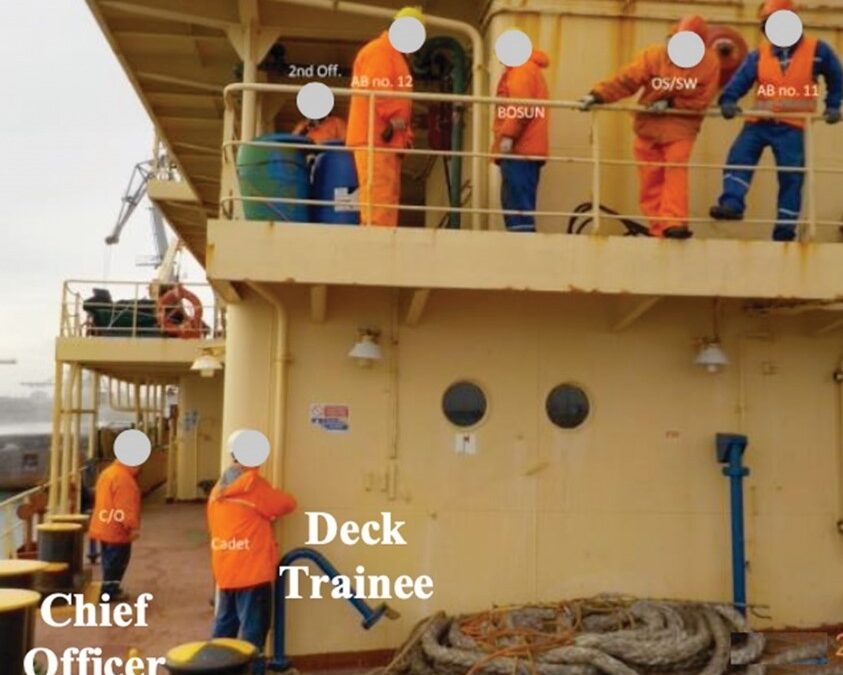 The Nautical Institute stresses the importance of lifelines and lifejackets when working on deck in its latest Mars Report. In this report, two crew members working on the poop deck of a bulk carrier lost their lives after being washed overboard by a large wave.

A bulk carrier, loaded to maximum draught, was underway with the main engine running on half ahead. In calm weather, a half ahead engine on this vessel would give a speed of about 9 knots, but due to the very unfavourable weather conditions, the vessel’s speed was about 3 knots.

Some loose mooring ropes were observed on the poop deck, with some dangling over the vessel’s guard rails. The officer of the watch (OOW) and the master were made aware of the situation and the chief officer proceeded to the poop deck with the bosun to assess the situation.

Due to the vessel’s low speed and the inclement weather conditions, it took over twenty minutes for the vessel to turn on a reciprocal course and to proceed towards the man overboard position. Six lifebuoys were released, including the two from the bridge wings. The liferaft embarkation ladder was rigged on the vessel’s side and crew members were posted as lookouts at several high points on the vessel.

The local coastguard deployed two search and rescue helicopter to assist in the search. The helicopters were able to identify two of the lifebuoys that were thrown by the vessel’s crew; however, there was no sign of the two victims. By night time, the search and rescue operation was terminated by the coastguard. The ship remained on location until noon the following day without finding any survivors.

The official investigation found, among other things, that neither victim was secured to the vessel with a lifeline when the waves washed over the poop deck. Additionally, the crew members were not wearing lifejackets while working on the exposed deck in adverse weather conditions.

Also read: Know what to do when someone falls overboard

This accident was covered in the Mars Reports, originally published as Mars 202139, that are part of Report Number 346. A selection of this Report will also be published in SWZ|Maritime’s September 2021 issue. The Nautical Institute compiles these reports to help prevent maritime accidents. That is why they are also published on SWZ|Maritime’s website.