Know What to Do When a Someone Falls Overboard 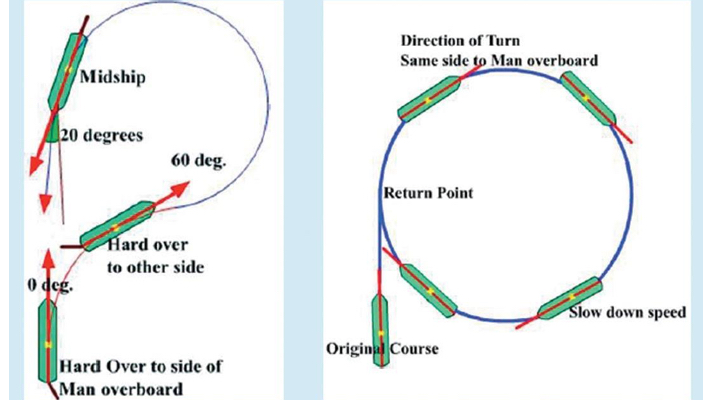 One of the principal tasks for a man overboard (MOB) incident is getting the ship turned around and back to the incident area in the shortest possible time. If sea room allows, hard helm should immediately be applied (to the side of the fall). To turn the ship around, the Willamson turn or Anderson turn should be used.

The Williamson turn is especially useful in reduced visibility as it brings the vessel back on a reciprocal course and into its own wake. However, with good visibility the Anderson turn should be employed as it is a quicker turn.

The latest Mars Reports sought to emphasise this lesson by referring to an incident from 2013. On 5 December 2013, around 08.30 hours, two crew members from the Netherlands registered motor vessel Marietje Andrea fell overboard and were never found. At that moment, the ship was sailing in international waters, about fourteen nautical miles south of the Swedish coast. The Dutch Safety Board published an investigation report in January 2015. A transcript of the incident:

A small general cargo vessel was sailing in coastal waters at about thirteen knots in a moderate one metre swell. Two crew were tasked with cleaning work on the foredeck; they dressed and assembled the required hose and equipment before starting forward across the hatches. In rough weather, a safety line was usually used to secure persons walking on deck, but in this case it was judged unnecessary as the vessel was not rolling excessively and there was no water being taken on deck.

At one point, the OOW heard a shout and immediately saw the two crew in the water on the port side, now just aft of the bridge and about two metres from the ship’s side. The OOW instructed the additional crew on the bridge to use the binoculars and not to lose sight of the two men in the water. He threw a lifebelt and a smoke marker into the water, then went inside to mark the man overboard (MOB) location on the electronic chart. He then notified the master before using the autopilot to slowly put the ship into a starboard turn (now almost two minutes after the MOB incident). He then contacted the coast radio station requesting SAR resources. By now, those on the bridge had lost sight of the victims.

Once on the bridge, the master took over control of the ship and accelerated the starboard turn. He also activated the general alarm to alert the rest of the crew. The vessel made it back to the initial MOB position about 11.5 minutes after the two men had fallen in the water. There was no sign of the victims so another smoke marker was deployed to refresh the previous one.

A SAR helicopter arrived on the scene about forty minutes after the men had fallen into the water and immediately started searching in the vicinity of the floating lifebelt that had been earlier thrown by the OOW. Searches continued with boats and helicopter until darkness but the missing crew members were not found.

The Dutch Safety Board concluded, that although the crew carried out a lot of tasks quickly, the turn was not fast enough: 'Because the turn was not immediately initiated with hard rudder, the turn which the ship finally made cannot be described as either a Williamson turn or an Anderson turn. The distance travelled was long, and the ship did not return to the MOB location on the reciprocal course. Hence it took eleven minutes and 28 seconds before the ship returned to the MOB location.'

If someone has fallen in the water there are many tasks to be done almost simultaneously. It is therefore recommended that the crew be familiar with all the tasks that need to be conducted in case an MOB occurs. Only repeated practice and, especially, unannounced MOB drills can hone the crew to perform optimally.

This is one of the May Mars Reports, originally published as Mars 201933, that are part of Report Number 319. A selection of this Report has also been published in SWZ|Maritime’s June issue.

Picture: The Willamson turn (left) and the Anderson turn.