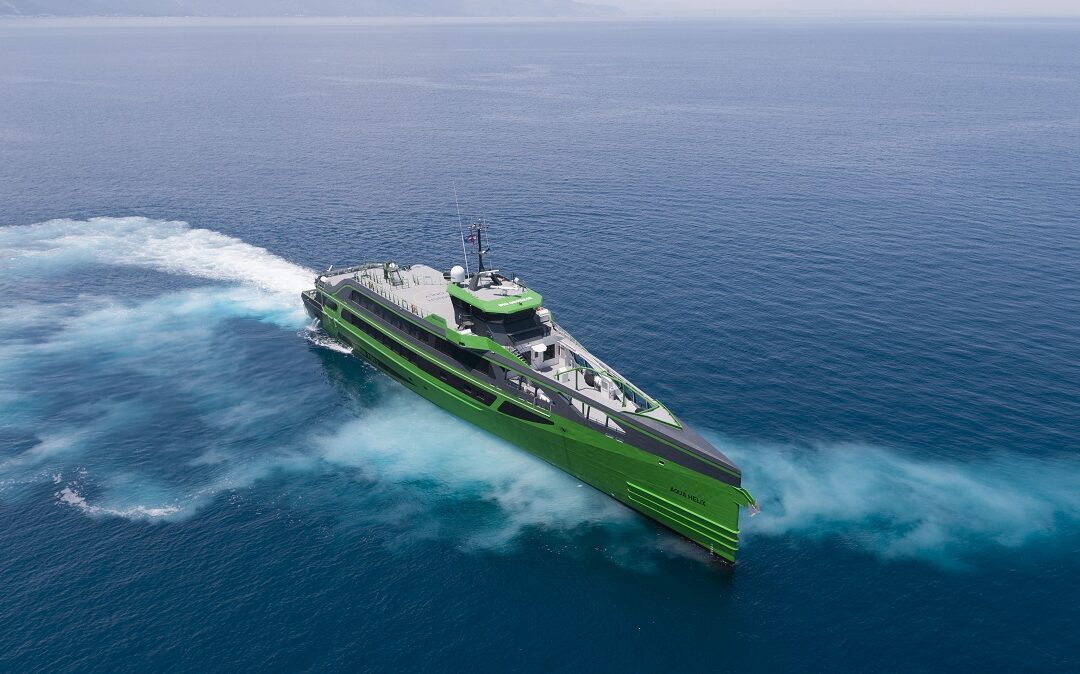 The first of Damen’s Fast Crew Supplier (FCS) 7011 class has completed its sea trials off the Turkish coast and is set to begin the passage to the Netherlands. The offshore energy market will soon be able to experience the comfort and capabilities of the 74-metre, 40-knot, 122-passenger, crew change vessel.

The FCS 7011 took five years of market consultation, research, design, engineering and construction to become reality. The vessel features the latest Ampelmann walk-to-work system and its goal is to meet the challenges presented by the unpredictability of the price of oil and increasingly competitive renewable energy. As a cost-effective crew transportation solution featuring the highest levels of both comfort and safety, it offers a viable alternative to helicopter transport. .

The business case is based on its ability to transfer much larger numbers of personnel over longer distances at higher speeds. This opens the door to moving away from day-rate structures towards a pay per journey model and, potentially, vessel sharing, whereby multiple offshore installations can be served in a single round trip, thereby delivering substantial savings in both time and operational costs.

With journey times of up to twelve hours, comfort and safety are key. To achieve this, the design incorporates the Damen Sea Axe bow, the positioning of the accommodation just aft of amidships, and interceptors fitted within the vessel’s stern, all to minimise sensations of motion as it moves through the sea.

The FCS 7011 also features a range of motion-compensating technologies to optimise the safety of crew transfers. These include a Kongsberg DP system, a tailor-made Ampelmann gangway and a VEEM gyrostabiliser, operating alongside the MTU main engines, Hamilton waterjets, Danfoss shaft generators, Reintjes gearboxes and Veth bow thrusters. The result is a tightly integrated advanced control system capable of delivering and receiving personnel safely in a wide range of sea states.

On arrival in the Netherlands, the Ampelmann gangway system will be installed on board the FCS, now named Aqua Helix, making it ready for fully-integrated, proof of concept trials in the North Sea.

Watch a video of the vessel’s sea trials below.