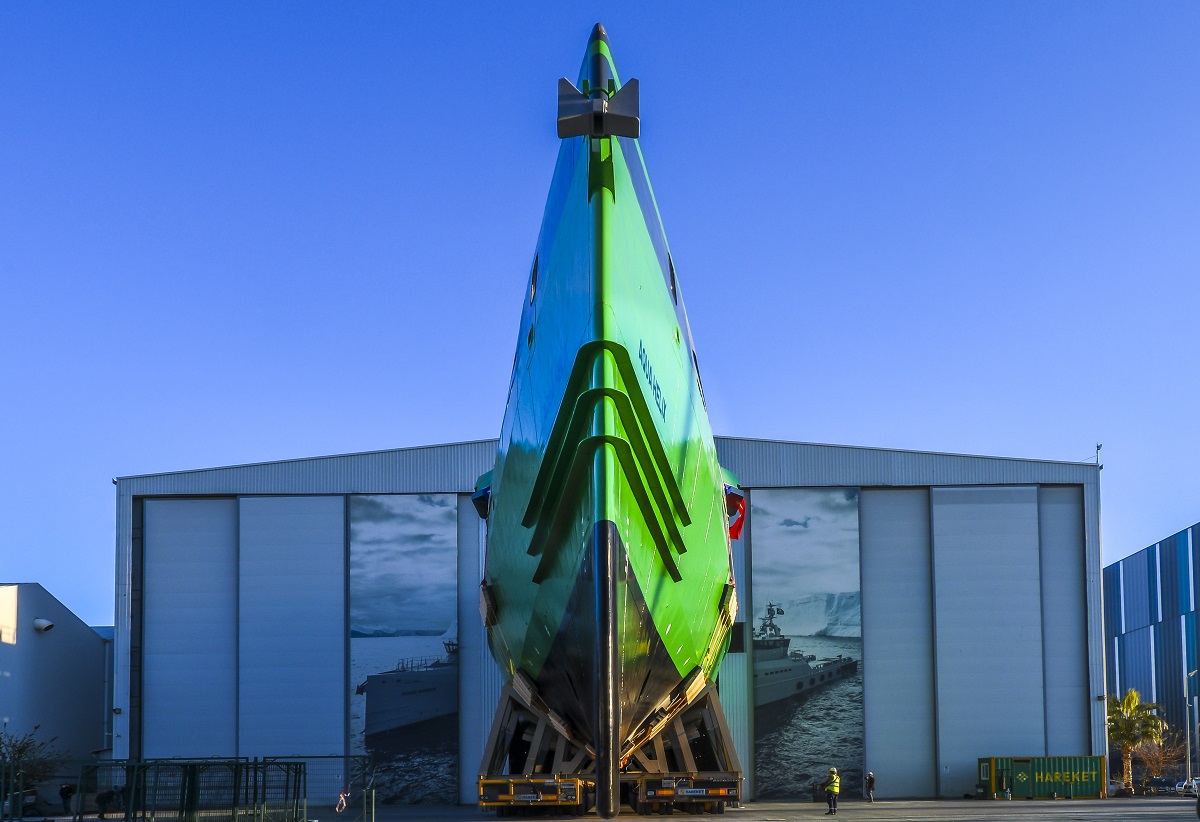 Damen Shipyards Group’s has launched its revolutionary Fast Crew Supplier (FCS) 7011 at its yard in Antalya, Turkey. In addition to combining different motion-compensating technologies, the ship allows for a new pay per journey business model that reduces crew transfer costs.

The construction of the FCS 7011 has continued throughout the coronavirus pandemic, with Damen implementing robust measures to ensure the safety and well-being of all involved with the project. Due to the ongoing nature of the pandemic, the launch was a very low-scale event instead of the large celebration that would usually be held for such a momentous occasion.

The vessel is the largest ever to have been launched in Antalya Free Zone. On top of that, the launching was a very specific operation handled by two cranes which were transported by fifty trucks to settle on site since the current launching facility is under re-construction.

Despite this, the launching remains a very important milestone in the development of the vessel and a significant step towards its completion. Following the conclusion of outfitting activities now taking place, the FCS 7011 will undergo sea trials off Antalya to test and demonstrate its capabilities.

Following this, it will sail to the Netherlands, where Ampelmann will install its gangway system, ready for fully-integrated proof of concept trials in the North Sea.

To meet the needs of an offshore industry faced with consistently low oil prices, Damen has developed the FCS 7011 as a cost-effective crew transportation. To cut the costs of crew transfer, the FCS 7011 offers the opportunity to transport up to 122 personnel in a single trip. This raises the prospect of a move away from day-rate structures towards a pay per journey model and, potentially, vessel sharing, thereby increasing the efficiency of offshore operations.

The design of the FCS 7011 pays particular attention to on board comfort – in both transit and transfer. During transit, the vessel’s Sea Axe bow plays an important role, reducing slamming to a minimum. Meanwhile, the accommodation is located just aft of mid-ships – where pitching motions are experienced minimally. Damen has incorporated interceptors to the vessel’s aft to reduce both pitch and roll motions during sailing.

Inside, passengers have luxurious reclining seating with excellent visibility that helps connect them to the sea, enabling them to adjust and reducing the potential for seasickness.

Typically, each of these components would be applied individually. Damen’s approach – which has been thoroughly tested via scaled models and simulations – has been to focus on enhancing the interaction between each one, creating a tightly integrated advanced control system that allows each part to excel in its specific task, resulting in a system greater than the sum of its parts. This will set new standards in the marine access market on a global scale.

The FCS 7011 will also feature Damen Triton – a connected vessel platform. With sensors located around the vessel, the platform will collect information that will benefit operators, enabling remote monitoring, preventive maintenance and efficient sailing, resulting in lower fuel consumption and emissions.