Wind propulsion – How can we apply it with maximum performance? 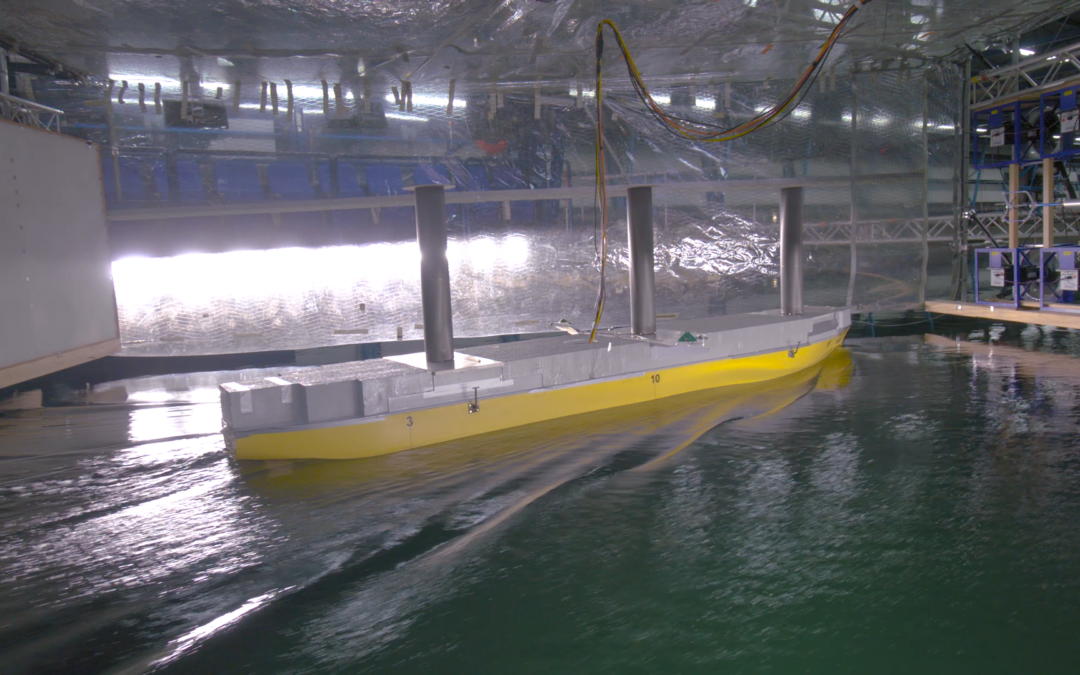 Upcoming regulations seem to boost the introduction of wind propulsion. Yet, applying this technology on board ships and making the most of it still require a lot of work. Senior project manager Rogier Eggers discusses the research projects taking place at MARIN and the hurdles they seek to overcome.

This article was written for SWZ|Maritime by Rogier Eggers, senior project manager at the Maritime Research Institute Netherlands (MARIN), R.Eggers@marin.nl.

Wind-assisted propulsion was the theme of the March issue of SWZ|Maritime. As already reflected in the majority of the articles there, we see continued indications that wind propulsion is now gradually being considered by a larger number of owners with a stream of announcements of either research projects starting up as well as actual installations (see figure 1), some of them with MARIN assistance.

In no small part it is now the legislation that is pushing the introduction of wind propulsion with the EEXI (Energy Efficiency Existing Ship Index) being implemented in 2023 and a considerable part of the world fleet not yet meeting the requirements. Further down the road, with a transition to carbon free or neutral fuels, wind propulsion could really be competitive by itself, assuming that those carbon free or neutral fuels along with the required changes on board will likely be much more expensive than current fuels (without even discussing whether they will be sufficiently available).

That high level picture does show good prospects for wind propulsion. However it’s of course still only one of the tools in decarbonisation and it’s not applicable to all ships and routes. Also there’s still a lot of work to do to make sure that wind propulsion is fully understood and used to its maximum potential while also ensuring that ships remain safe and efficient. On this matter we present you two of our recent research projects at MARIN as well as the WiSP2 Joint Industry Project (JIP) where we engage with the wider industry around wind propulsion to generally alleviate barriers for further introduction of wind propulsion on performance assessments and regulations.

Traditionally, merchant vessels are designed with a focus on hydrodynamic conditions, often neglecting aerodynamics. While this is to a large extend reasonable for traditional vessels, it is clear that aerodynamics aspects must be considered for wind assisted vessels, especially when an analogy is made to ship hydrodynamics; one would not design a propeller without including some interactions with the ship. Thus in a similar fashion, it would be erroneous to consider wind propulsion without accounting for interaction effects between individual wind propulsion devices as well as the ship and wind propulsors. Even though this is not completely new information for most (experienced) sailors, it is still surprisingly often disregarded.

In the literature, the performance of wind propulsors is generally derived from wind tunnel testing data or CFD analysis by examining undisturbed incoming flows. Those experimental or numerical databases are, however, often omitting the interactions discussed earlier. At MARIN, we wanted to find out more about these interactions and therefore developed a numerical approach using CFD RANS simulations.

Interaction effects are found to depend on both the ratio between the rotation speed of the rotor and the apparent wind speed (“spin ratio”) and the local apparent wind angle. The largest performance losses are found in beam wind conditions with high spin ratio. Omitting these interactions in the design or retrofitting phase may lead to incorrect power saving expectations. Therefore, MARIN developed an empirical ship-wind propulsor interactions model based on the principles similar to the thrust identity method as is commonly used for propellers. The results indicate that a good agreement with CFD is obtained for beam wind conditions, see figure 4b. Thus, when having established the interaction with CFD, further exploration of operational conditions can now be done with faster, calibrated, empirical calculations.

The wind propulsor interactions are firstly investigated with a validated CFD model. An illustration of the CFD validation using experimental data obtained by Giovanni Bordogna in the wind tunnel section of Politecnico Di Milano is shown hereunder. Two rotors in close proximity to each other are analysed. The performance of a standalone rotor are shown with the horizontal lines for reference. For an apparent wind angle of [0 – 90] degrees rotor A is positioned upstream of rotor B, and vice versa for [90 – 180] degrees. Not only down-wash but also up-wash effects are captured by the experiments. The CFD is reproducing these effects fairly well as can be seen in Figure 5. As mentioned above, the upcoming challenges now lie in the incorporation of this new knowledge in the ship wind propulsor interactions model.

Impact of wind propulsion on hydrodynamics

To study these phenomena and also to find mitigation options, two case vessels were analysed as can be seen in figure 6. It is noted that the substantial installations used are purely fictional. The main interest here is to introduce a substantial contribution of wind propulsion, which could also be generated with other device types or arrangements.

The vessels are assumed to operate at a constant operational ship speed by reducing the engine power depending on the available thrust from wind propulsion. It is found that the hydrodynamic losses under these assumptions are respectively three per cent and six per cent of the calm water resistance for the bulk carrier and coaster in loaded condition. In ballast condition the hydrodynamic losses increase to seven per cent and nine per cent of the calm water resistance. It would of course be helpful to reduce these losses.

Using the calibrated hydrodynamic numerical models of the rudder and hull it is seen in Figure 7 that the hull is able to produce more lift at equal drag compared to the rudder. The difference increases when there is no flow from the propeller over the rudder as is the case when fully sailing. When keeping the same rudder design, it is therefore beneficial to reduce the required rudder angle. This will also reduce the occurrence of excessive rudder angles which lead to a reduction of wind propulsor thrust otherwise.

A reduction of the rudder angle can be achieved by moving the wind propulsors closer to the bow when possible. This is the case because the hydrodynamic side force on the hull of cargo ships acts very far forward, sometimes even ahead of the bow.

On the other hand modifications to the hull can be attempted to improve the lift over drag or move the application point of the side force aft. Based on various hull form modifications and variations to the bilge keel design it was observed that this is challenging and only minor improvements of around 0.5 per cent could be obtained. Mainly because an increase to the calm water resistance due to these variations often takes away any benefit from the reduction in hydrodynamic losses in the conditions where the wind propulsion is active.

It is clear that “conventional” optimisation for resistance is still of major importance for wind assisted vessels. However, the research did show potential for improving (moveable) appendages, such as the rudder, in the stern region to improve the overall results. Ongoing research is looking into suitable configurations.

As mentioned there are still considerable barriers for a broad uptake of wind propulsion in shipping. The report from CE Delft [2] for the EU Commission identified as key barrier: “(Trusted) information on the performance, operability, safety, durability, and economic implications of the Wind Propulsion Technologies”. This barrier is mostly still in place.

MARIN and ABS initiated the WiSP Joint Industry Project to help reduce this barrier. Fourteen participants joined in this project. Based on sensitivity studies, the project came up with recommendations for good performance predictions. These were delivered to participants and they were also used in a debate that now started to adjust the simplified modelling to quantify wind propulsion for the EEDI and EEXI. Further, ABS performed an inventory of existing and proposed rules regulations within the context of wind propulsion.

To derive recommended methods for performance predictions, a systematic variation of methods was applied to four cases as shown in figure 9.

“Maersk Pelican” (has been renamed to “Timberwolf”) 109647 tdw tanker sailing with rotors.

Results for savings in global wind statistics are shown in figure 10. This figure shows the two extremes in modelling complexity where Tier 1 is the most simple method (very similar to the present modelling for EEDI/EEXI) and Tier 2 being the most complete. What the results show is that the difference between the two methods start to become larger for average savings of 15% and up. It is mentioned that these differences may come from different physical effects playing a role. And whereas most physics lead to some loss in performance when you start to model more accurately, that is not true for all parts. For instance most propellers are overloaded from an efficiency perspective. Unloading them when adding wind propulsion can lead to increase in efficiency.

Whereas calculations can be done fully at Tier 1 or Tier 2 level, this is not always required. A flow diagram was composed to decide at which complexity each element is to be assessed for reasonable accuracy, such that unnecessary work is avoided.

The first phase of WiSP was concluded. A successor, WiSP2 has directly been started already to significantly expand the scope and apply further refinement to the recommendations from the previous WiSP project. Additions on performance include the consideration of more types of wind propulsors, validation and a delivery of a software tool for predictions. The cases will include ship(s) where wind is used as the main propulsion. On the regulatory side ABS will continue the discussion on how to treat wind propulsion fairly in EEDI and EEXI. Also, we’ll look at the influence of wind propulsion on manoeuvring and course keeping.