Do all escape routes on your ship have emergency breathing devices? 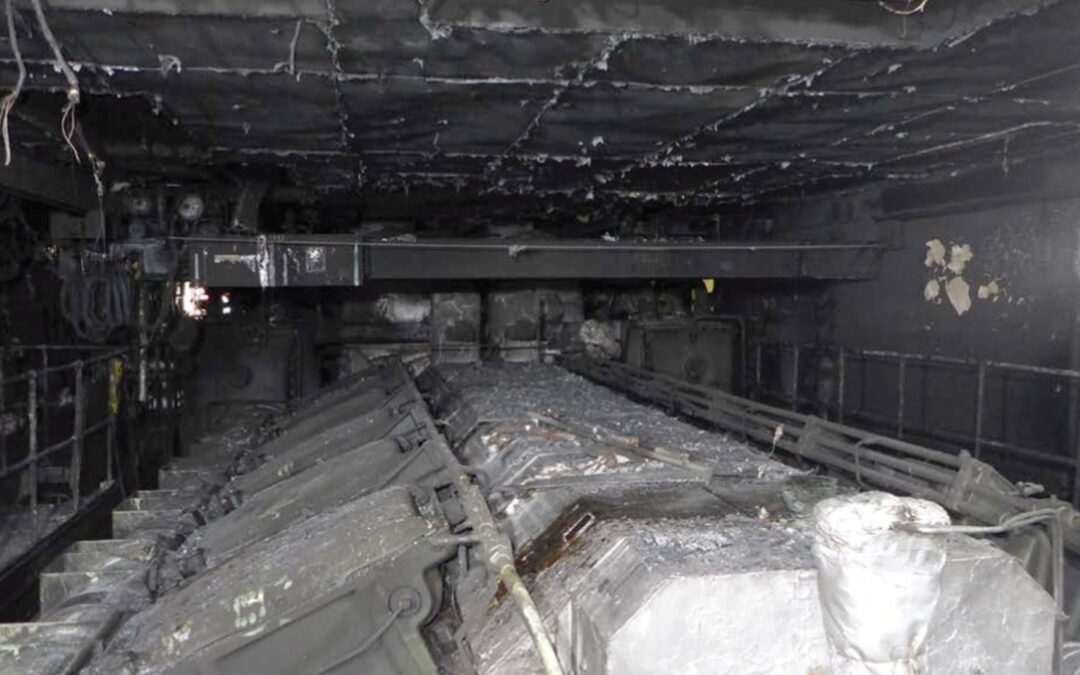 You never know where a fire on board a ship may occur or where the crew is at that time. In its latest Mars Report, The Nautical Institute describes how a crew member had to choose an escape route without an emergency escape breathing device, as the other route was not an option. So, the Institute urges vessel owners to fit such devices to all escape routes, even if this goes beyond class requirements.

A ro-ro cargo vessel was underway. At about 20.00, the engineer of the watch (EOW) left the engine control room (ECR) and started his hourly rounds of the engine room and machinery spaces. Shortly after entering the purifier room, he heard loud metallic knocking sounds coming from the engine room. Meanwhile, vibrations were being felt on the bridge by the officer of the watch (OOW). He immediately reduced the controllable pitch propeller from sixty per cent to 25 per cent. He then saw that the fuel consumption meter was also fluctuating and giving abnormal readings, while various engine warning lights were illuminated.

The EOW opened the purifier room door, looked out into the engine room and saw smoke rising from the port forward end of the main engine. The noise and vibration levels rapidly increased and, sensing danger, he ran back into the purifier room and crouched behind one of the purifiers. Almost immediately there was a loud bang and flames flashed past the open purifier room door; the space quickly filled with thick black smoke. The ship blacked out, but within seconds the emergency generator started and the emergency lighting came on. Despite this, the smoke in the engine room had reduced visibility to almost zero.

The master, who had been alerted by the strong ship vibrations, arrived on the bridge as the blackout occurred. The fire alarm system had been activated and the bridge alarm panel indicated that all zones within the engine room were affected. The master put the vessel’s controllable pitch propeller to zero pitch. He then instructed the OOW to sound the general alarm and make an intercom broadcast stating that it was a genuine emergency and instructing crew to their muster stations. At about the same time, the chief officer arrived on the bridge and reported that he had seen copious amounts of smoke being emitted from the funnel.

The engine room fuel systems’ quick-closing valves and fuel pump emergency stops were activated from the control box adjacent to the ECR. In the purifier room, the EOW realised that his nearest escape route would take him past the main engine at cylinder head level. He decided instead to use the secondary escape route at the aft end of the engine room, even though this escape route was not fitted with an emergency escape breathing device (EEBD). He took a deep breath and then exited the purifier room.

On entering the dense black smoke, he ducked underneath the main engine exhaust gas trunking and ran aft past the two auxiliary generators. The escape route led him to the first of three vertical ladders. When he climbed the first ladder, he struggled to get past the ladder platform guard rail safety chains. He fell back down the ladder three times, losing his torch in the process, before succeeding in mounting the ladder. About ten minutes after the initial fire outbreak, the EOW escaped from the engine room through the funnel casing weathertight door on to the upper vehicle deck. He then collapsed, gasping for breath.

Meanwhile, the engine room fire party had arrived on the upper vehicle deck and was running out fire hoses. They reported the EOW missing. A second muster took place on the upper vehicle deck, where the engine room fire flaps were located and were being shut. The EOW was located and was attended to by crew. A helicopter was requested from the local coast guard to evacuate him as soon as possible. Now that all crew and passengers were accounted for, the fire flaps closed and the engine room fuel supply isolated, the engine room’s CO2 system was activated. Boundary cooling was initiated. The fire was declared extinguished about three hours and forty minutes after it had begun.

This accident was covered in the Mars Reports, originally published as Mars 202133, that are part of Report Number 345. A selection of this Report will also be published in SWZ|Maritime’s September 2021 issue. The Nautical Institute compiles these reports to help prevent maritime accidents. That is why they are also published on SWZ|Maritime’s website.