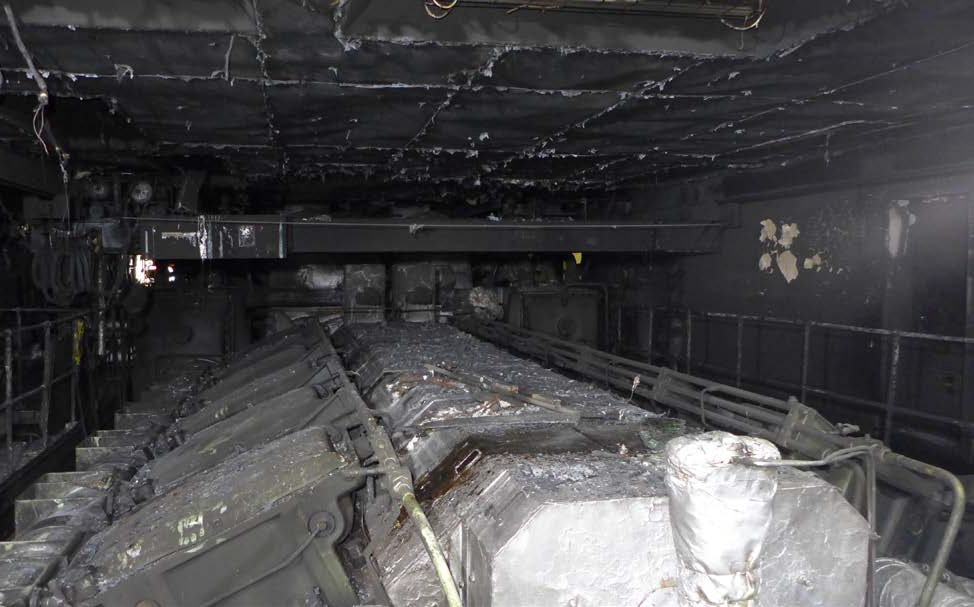 The engine room fire on board the DFDS ro-ro cargo vessel Finlandia Seaways on 16 April 2018 was caused by inadequate maintenance, says UK Marine Accident Investigation Branch (MAIB) in its accident report. According to ferries union RMT, the poor maintenance strategy was the result of ‘commercial pressure’.

The Lithuanian registered ro-ro cargo vessel Finlandia Seaways suffered a catastrophic main engine failure that caused serious structural damage to the engine and a fire in the engine room. The vessel’s third engineer, who was on duty in the engine room at the time, suffered serious smoke-related lung, kidney and eye injuries during his escape.

The MAIB investigation identified that the catastrophic engine failure and been initiated by the failure of a single component and found that the standard and management of maintenance carried out by the vessel operator’s maintenance support contractor was a significant causal factor.

Safety issues discovered by the MAIB

The MAIB reached the conclusion that the engine’s connecting rods had not been maintained in accordance with the engine manufacturer’s instructions. In addition, defects introduced during component overhauls had not been identified by the ship’s crew or the company’s technical superintendents.

Moreover, the significance of the damage caused to the connecting rod small ends during overhaul was not fully appreciated and although a class survey item, class was not kept informed.

Finally, the report notes that there were no emergency escape breathing devices on the secondary escape route used by the third engineer.

RMT responded to the accident investigation report. ‘There is no getting away from the fact that commercial pressure led to this incident,’ says RMT General Secretary, Mick Cash. ‘The hard working seafarers on board, some of whom were paid well below the National Minimum Wage, were lucky to avoid more serious consequences from an exploding engine. They were let down by a series of failures in the repair and maintenance regime overseen by the shipowner, DFDS and the classification society Lloyd’s Register which stemmed from the decision to outsource engine repair work.’

According to the trade union, the ‘avoidable accident’ also led to the withdrawal of the Finlandia Seaways and the permanent closure of the Rosyth-Zeebrugge route.

Cash: ‘Scotland remains without a regular roll-on roll-off ferry link to the continent as a result, whilst DFDS has re-deployed the Finlandia Seaways in the Baltic Sea. This raises serious questions over the affect of the business model in the ferries industry on crew safety and economic resilience. RMT will be calling on the Scottish and UK Governments to take action in light of this report.’

In the report, MAIB recommends that MAN Energy Solutions and Lloyd’s Register provide technical advice to DFDS on the actions the company should take to minimise the risk of a similar catastrophic engine failure, and any other vessel operators whose MAN engines might have been subjected to similar maintenance practices.

In addition, DFDS is to review and improve how its chief engineers conduct class-related equipment examinations as part of the Continuous Survey Machinery cycle to ensure that examinations are conducted thoroughly and reported accurately.

The maintenance to the engine was outsourced for a large part to Diesel Service Group. The MAIB states that this company should fully apply equipment manufacturers’ maintenance and repair guidance and procedures.

Furthermore, the company should review and, as necessary, amend its record keeping in order to generate a full and auditable record of the maintenance carried out by its staff. The MAIB also recommends to review and update staff training to ensure familiarity with engineering methods appropriate for the various repair and overhaul tasks, backed up with a suitable quality assurance process to ensure standards are maintained.