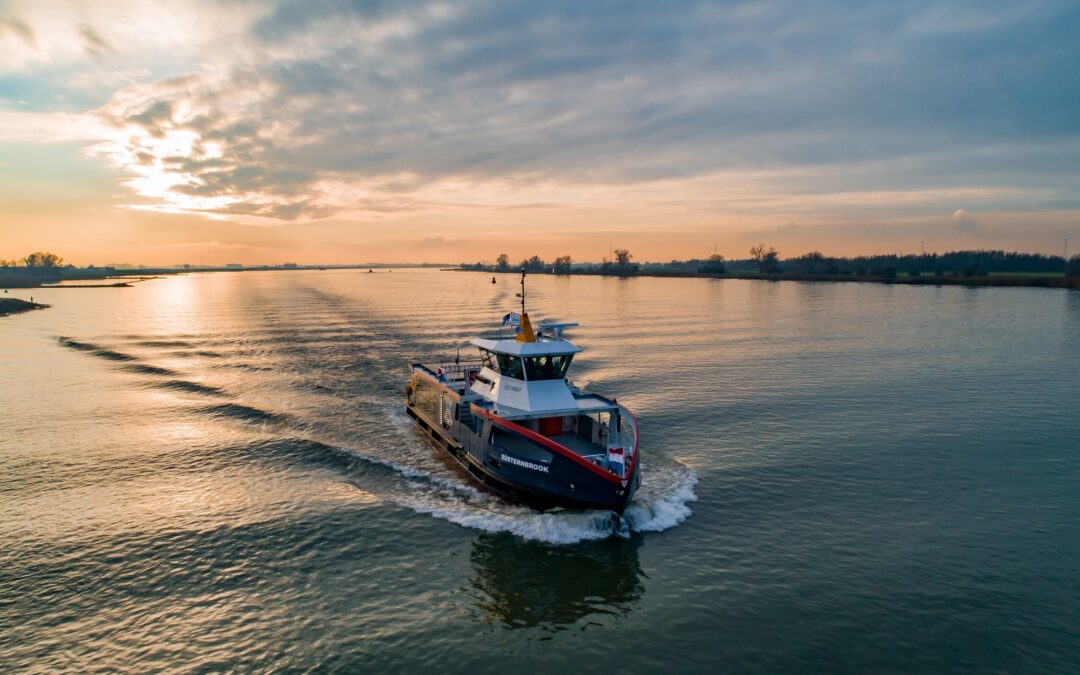 The jury of the Maritime Award: KNVTS Ship of the Year 2021 has nominated three ships for the Netherlands’ most prestigious maritime award. The award will be presented for the 23rd time during the Maritime Awards Gala 2021. All nominees this year are fully-electric ferries, two of which were built by Holland Shipyards Group and the other one by Damen Shipyards.

The nominees in random order are:

Ferry Bryggen, designed and built by Damen Shipyards Group in Gorinchem. The ferry is an innovative design, fully electric, environmentally friendly, efficient in operation and economically viable and can carry eighty people. The ship’s sustainable qualifications are driven by a series of innovative digital shipbuilding techniques, including remote measurement, as a network of sensors is placed inside the ship. This results in improved efficiency and a reduction in downtime for maintenance. The loading system consists of an innovative automatic mooring system that provides a safe connection between the ship and the loading system on shore.

Ferry NZK-100 was designed and built by Holland Shipyards Group in Hardinxveld-Giessendam. It is the first ferry in a series of five, specially designed for the Amsterdam’s public transport company GVB to maintain the connection between the north and south sides of the North Sea Canal. The ferry has a capacity of twenty cars and a maximum of 400 passengers. The crossing only takes a few minutes, as does docking/loading/unloading. The propulsion train is fully electric, with the necessary energy being supplied by batteries that are charged once per return journey on the north side of the canal. There are also two diesel generator sets installed, which take over from the batteries if the weather conditions require it or if another, much longer route is sailed.

Foot ferry Düsternbrook (picture at the top) was also designed and built by Holland Shipyards Group in Hardinxveld-Giessendam. It was designed and built for the port area of Kiel on behalf of SFK. The ship can transport 140 passengers and sixty bicycles. An important criterion is that the ferry must be able to run emission-free for ten hours a day. The ship is optimised for a speed of less than eight knots, because for most of the route a maximum speed of five knots applies. The propulsion line is entirely electric, with the energy being provided by a large battery pack of 816 kWh. A large battery pack is necessary because it cannot be recharged while sailing.

Ships that qualify for the Maritime Award: KNVTS Ship of the Year 2021 must – especially with regard to innovative aspects – have been developed in the Netherlands, have preferably been built (for at least a large part) in the Netherlands and must have been delivered between 1 May 2019 and 30 April 2021 (two years this time as the 2020 edition of the award was cancelled as a result of the pandemic). The jury will assess the submitted ships against the criteria Design, Economy, Sustainability and Environment, Safety and Construction Process.