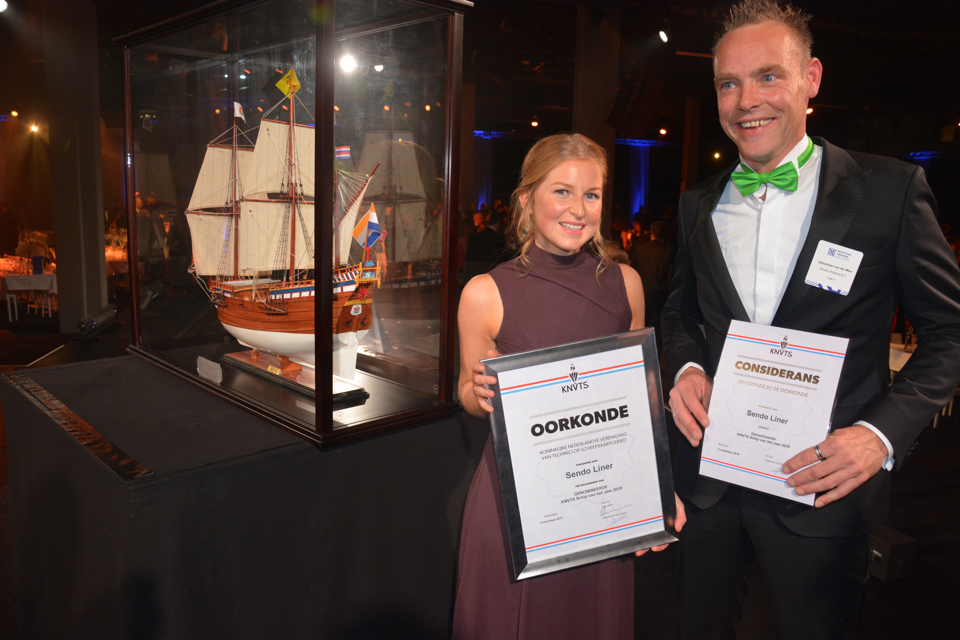 In addition to being a future-proof economical inland navigation vessel, the Sendo Liner can also carry more cargo when compared to similar vessels. The KNVTS jury called it ‘an important example of a promising transition path to efficient, emission-free waterborne transport’ and presented the ship with its Ship of the Year Award at tonight’s (4 November) Maritime Awards Gala.

In the design, extensive attention was paid to making the ship as efficient, economical and clean as possible, as well as to making it future-proof. The ship had to be able to be at the top of the low-emission fleet throughout its entire lifespan.

The Sendo Liner is an inland container vessel measuring 110 x 11.45 x 3.2 metres. The ship was created by Sendo Shipping in close cooperation with Concordia Damen. Prior to the design, an extensive measurement campaign was carried out on a similar vessel (the Nadorias), so that the operational profile and the resulting design requirements were clear.

Based on these design requirements, an efficient hull shape was developed around a two propeller drive using smart design choices and Computational Fluid Dynamics (CFD) calculations. Such an effort to achieve an optimal fit-for-purpose hydrodynamic concept is rare, perhaps unique, in inland navigation. Based on the operational profile, a diesel-electric concept with two generators of 435 kilowatts was chosen instead of the “classic” solution with one diesel engine with a much higher power output. A battery package of 540 kilowatt-hours ensures peakshaving and the delivery of peak power, which is only rarely required. This allows the generators to run at a favourable load, which benefits fuel consumption and emissions.

Sendo Shipping rightly observes that it will take some time before the technology is ready to allow for long periods of sailing emissions free. With the battery package that is already installed on board, the company takes a first step, but does not yet aspire to a completely emission-free operation. In order to be able to do this in the future, the ship has been designed in such a way that no cumbersome conversion is required to use hydrogen, in combination with a fuel cell, or LNG as fuel.

In addition, large components (generators, bow thrusters) can be removed quickly and easily by means of a large hatch. The design also incorporates sufficient redundancy into the systems to guarantee a high level of operational reliability.

By optimising the design, it is now possible to fit fourteen rows of containers within the usual main dimensions of 110 x 11.45 metres instead of the standard thirteen. Furthermore, a large ballast system with a capacity of forty per cent of the payload has been installed, including an open tank into which ballast or containers can be placed as required. As a result, an air draft of 7.5 metres can be achieved with three layers of containers, which means that it can sail the waters to Groningen.

According to the jury, the Sendo Liner shows ‘how close cooperation between user and designer/builder leads to successful innovation.’

In total, there were three nominees for this award. The other two were motor yacht Bravo Eugenia and DC Orisant.

The Maritime Awards Gala once again saw the presentation of five maritime awards. In addition to the KNVTS Ship of the Year Award, these were the KVNR Shipping Award, the Maritime Innovation Award, the Maritime Designer Award and the Royal Netherlands Navy (RNLN) Van Hengel-Spengler Award. Almost 900 maritime professionals, politicians and press attended the event. Honorary guest of the evening was Rotterdam’s mayor Aboutaleb.

Picture: The winners representing the Sendo Liner (employees from Concordia Damen and Sendo Shipping) pose next to the ship model they have won (picture by SWZ|Maritime/G.J. de Boer).