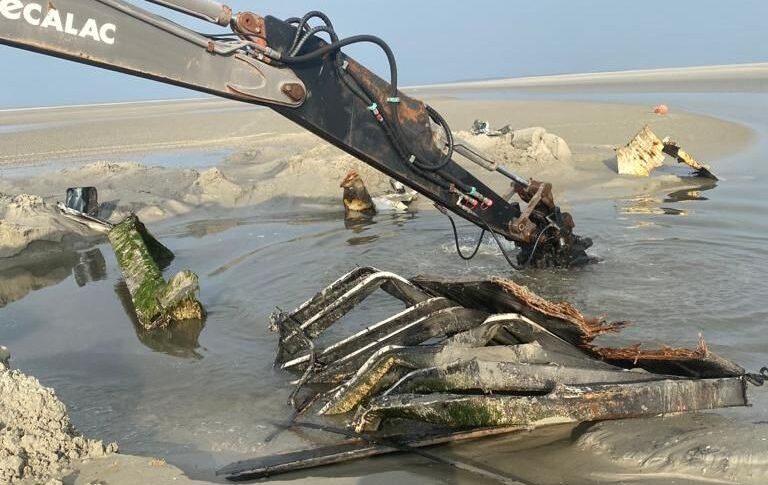 Over 2.5 years after the MSC Zoe lost 342 containers in the North Sea just north of the Dutch Wadden Islands, Rijkswaterstaat has removed the last container part from the Wadden Sea. Salvage company BDS salvaged parts of a container on the Rif, a sandbank between Wadden Islands Ameland and Schiermonnikoog.

The accident with the MSC Zoe took place in the night of 1 to 2 January 2019, north of the Wadden Islands. The ship, almost 400 metres long, ran into trouble during a storm while sailing the southern shipping lane, which carries ships close to the Wadden Islands.

Rijkswaterstaat is part of the Dutch Ministry of Infrastructure and Water Management and responsible for the design, construction, management and maintenance of the main infrastructure facilities in the Netherlands. The organisation has admitted that removing this last container part does not mean everything has now been cleaned up. More debris could potentially have sunk into the sand, hidden from view. This had in fact happened to the container part that has now been salvaged. The part had been spotted before, but was then covered by sand. Only recently did it come back into view after a storm.

MSC has also contributed over half a million euros to an investigation into the possible environmental damage caused by the disaster. Should this be the case, then a maximum of 7 million euros can be recovered from MSC’s insurer.

Even now, not all the cargo from the container disaster has been found. The rest of the money is therefore intended to compensate fishermen who still find things in their nets, salvage operations from the sea, such as the one carried out now, and future cleaning of the beaches.