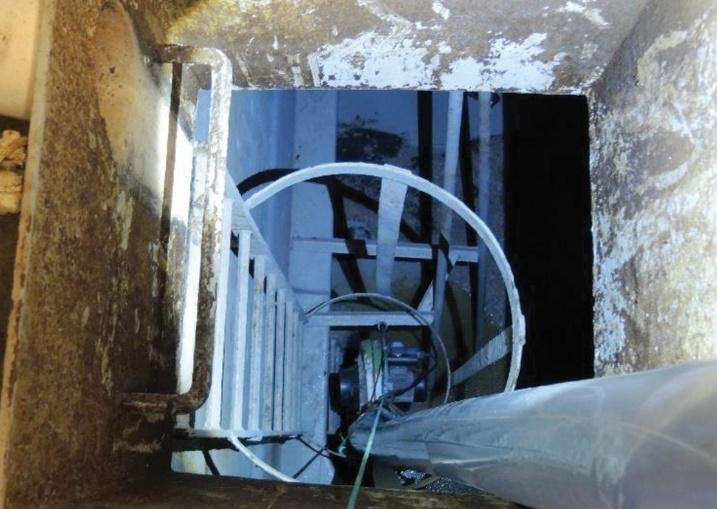 Testing for oxygen content alone is not enough to allow safe entry into confined spaces. The Nautical Institute issues this warning in its latest Mars Report in which a crew member died in an enclosed space. He died as a result of the presence of toxic hydrogen sulphide (H2S) and poorly executed rescue attempts.

A factory trawler was underway and being made ready for fishing. Crew had finished cleaning the factory and were preparing the silage tanks for cleaning. Silage tanks are special compartments that contain unused fish parts that are processed into silage and later pumped ashore (used to make oil and protein concentrate used in feed for farmed fish).

The tanks had last been cleaned about five weeks earlier and there was still silage residue at the bottom of the tanks. Cleaning these tanks included preparatory work such as flushing the tanks by filling them with seawater and emptying them several times and then lowering a fan into the tank to ventilate. The usual method was to lower the fan into the tank using a rope. Flushing was accomplished as per the above diagram (not to scale). For the ventilation, a plastic hose was attached to the blower to channel the gases out into the open air. It had previously been a challenge to prevent the hose getting twisted when the fan was lowered, and it was decided to send someone into the hold to position the fan correctly, if safe.

Two crew rigged the fan and hose. When the equipment was ready, one crew member with an oxygen detector entered the tank. After descending part of the way the fisherman shouted to his colleague on deck that there was a lot of silage residue left in the tank; he then proceeded down to the bottom of the tank. Suddenly, he shouted ‘There is no air here’ before jumping back onto the ladder. After a few steps he abruptly fell backwards, landing at the bottom of the tank, unmoving and face-down in the silage residue.

The crew member outside the tank raised the alarm and one of the vessel’s Breathing Apparatus (BA) sets was brought to the access hatch. Within minutes, the BA was donned and a crew member descended into the silage tank. He shouted up to throw down the end of a fire hose that he planned to use to hoist the victim up. Another crew member wearing a BA entered the tank, and the two of them attempted to fasten the hose around the victim, with limited success.

By the time the vessel’s lifting equipment was lowered into the tank, the first crew’s air ran out and he had to exit. Another crew member wearing a BA entered the tank and, together with the remaining rescuer, tried to secure the strop around the victim. They found the task very challenging as the victim repeatedly slipped out of the strop because he was unconscious.

Finally, as they were hoisting the victim up, his inert body was caught repeatedly on the ladder cage. Another twenty minutes passed before they finally managed to get the injured person out of the tank. When the victim was finally retrieved from the tank, CPR was immediately performed and attempts were made to resuscitate him using a defibrillator. This work continued non-stop, with most of the crew involved, until medical personnel from the local Coast Guard arrived. The medical personnel ascertained that the injured person had died and CPR was discontinued.

This accident was covered in the Mars Reports, originally published as Mars 202124, that are part of Report Number 343. A selection of this Report has also been published in SWZ|Maritime’s June 2021 issue. The Nautical Institute compiles these reports to help prevent maritime accidents. That is why they are also published on SWZ|Maritime’s website.