Nautical Institute: Find the cause of water ingress before counteracting 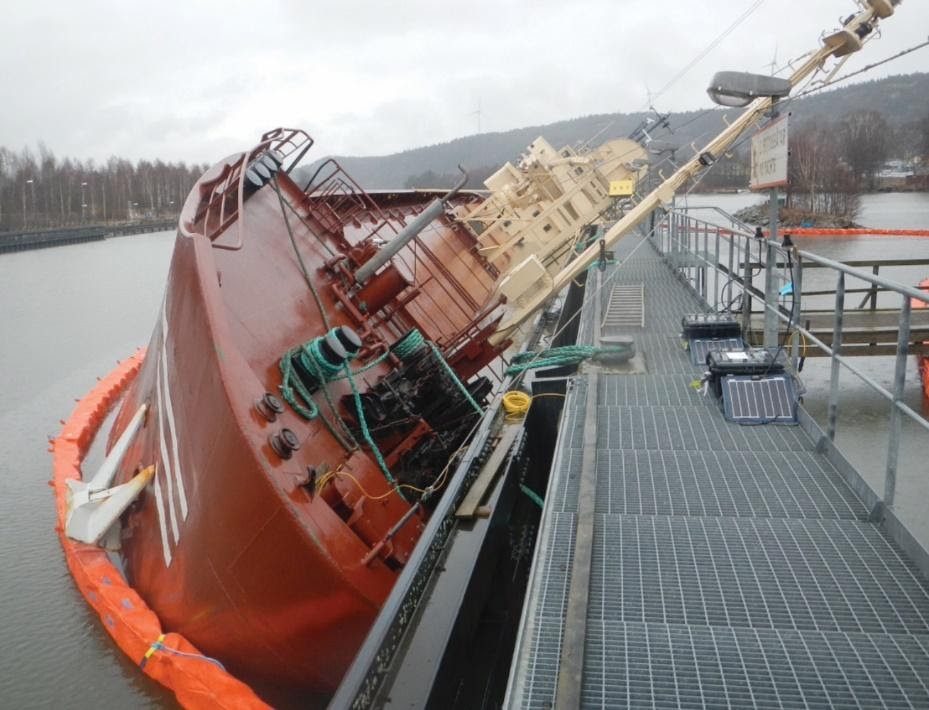 If at all possible, leave a ship in its grounded position until a full assessment of the damage has been carried out. The Nautical Institute gives this advice in its latest Mars Report. In this Report, a general cargo ship ended up becoming a total loss because crew took the wrong kind of corrective action.

A general cargo ship loaded with grain was in a river waterway and approaching a lock entrance. On the bridge the pilot was steering the vessel and the master was controlling the main engine according to the pilot’s instructions. The propulsion/steering consisted of a reversible propeller surrounded by a controllable propeller nozzle/rudder.

As the vessel approached the lock at about 4 knots, the master initiated a reversing manoeuvre according to the pilot’s instruction, but the reverse order did not work. The vessel’s bow now pointed to the port shore. A new reverse manoeuvre was attempted. Reverse power began, but not in time to keep the vessel from grounding.

With reverse power still at full, the ship came back into the channel relatively quickly. During this movement, the vessel’s starboard side heavily contacted the cement support dolphins of the lock approach jetty. Unknown to the crew, this contact caused a hull breach just below the waterline.

The ship was quickly moored port side to, on the lock approach jetty. Shortly afterwards, the ship began to list to starboard. Due to the grounding, it was assumed that there was water ingress into one of the starboard double bottom ballast tanks, so the crew countered by filling port tanks.

The ship had an estimated list of 15–17 degrees to starboard so ballasting on the port side continued as there was concern that the ship would capsize to starboard. The list to starboard was decreasing when suddenly the vessel flopped to port and lay against the jetty with a 20 degree list. The crew were brought on shore.

The ship later rolled further to port and stabilised at about 54 degrees. After nearly four weeks salvage work, the ship was declared a total constructive loss and was scrapped.

The investigation found, among other things, that although the initial grounding incident was relatively minor, it quickly developed into a serious accident requiring a protracted salvage process. Water ingress was not into the double bottom tanks as initially assumed by the crew, but into the starboard dry-space tanks higher up, with the breach just below the waterline.

This accident was covered in the Mars Reports, originally published as Mars 202123, that are part of Report Number 343. A selection of this Report has also been published in SWZ|Maritime’s June 2021 issue. The Nautical Institute compiles these reports to help prevent maritime accidents. That is why they are also published on SWZ|Maritime’s website.