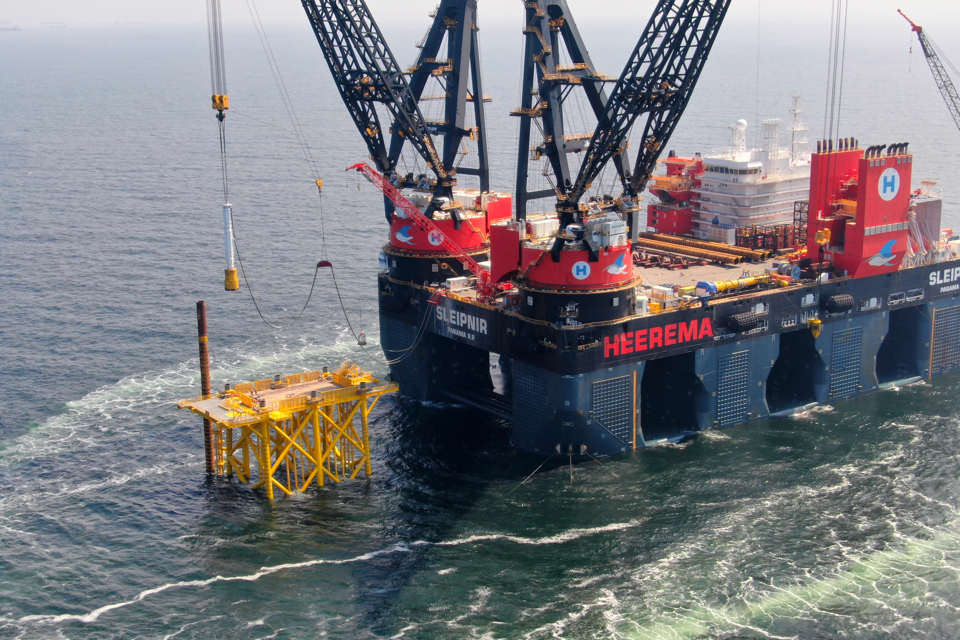 Heerema secured the contract for this project with the jacket and topside main contractor, Petrofac. While the Hollandse Kust (zuid) (HKZ) wind farm developer is Vattenfall. The transformer station is owned by the Dutch grid provider TenneT.

The project is Sleipnir’s second on the HKZ project, with the installation of the HKZ alpha jacket in 2020. The second jacket was transported to the HKZ location on Sleipnir’s deck after being picked up in Amoy Fjord, Stavanger, Norway on June, 22. After that, the vessel sailed to the HKZ location around 22 kilometres off the coast of Scheveningen, the Netherlands.

The jacket is the foundation on which the transformer platform will be placed. It is 50 metres long, 34 metres wide and 44 metres high and is anchored to the seabed by six piles, each weighing 162.5 tonnes. The 57.7 metre long piles were drilled 46.5 metres into the seabed. The jacket was then attached to the piles.

Together, this forms the foundation for one of the two transformer stations for the wind farm HKZ. The transformer platforms will have a capacity of 700 MW each. The first jacket for the Hollande Kust (zuid) wind farm was installed in the North Sea in September last year.

The superstructure (or topside), the transformer station itself, will be lifted onto the first jacket at the end of this year. The topside of the second jacket is expected to follow early next year. Once the topsides have been lifted onto the jacket, the last systems will be connected, tested and put into operation. The cables of the wind turbines will then be connected and the wind farm is expected to be fully operational in 2023.

Sleipnir is equipped with two cranes of 10,000 metric tonnes lifting capacity each and a reinforced deck area of 220 metres in length and 102 metres in width, which make it the largest crane vessel in the world. It is equipped with dual-fuel engines. When operating on LNG, as it did when installing the jacket, the vessel is said to reduce CO2 emissions by 25 per cent, NOx emissions by 92 per cent, SOx emissions by 99 per cent, and particulate matters by around 99 per cent compared to traditional marine gas oil powered crane vessels.

‘We are proud to work alongside these parties to contribute to the energy transition in the Netherlands,’ says Koen van der Perk, Heerema Wind Director. ‘With our main office located in Leiden, the Netherlands, this project was special to execute so close to home, with visibility from the shore.’

The grid connection for Hollandse Kust (zuid) is located 22 kilometres off the coast of the Dutch province of South Holland. It consists of two transformer platforms at sea, each with two 220 kV alternating current cables. The sustainably generated electricity is transported to land via these cables. TenneT has built a new onshore transformer station there and is expanding the high-voltage Maasvlakte 380kV substation. From this high-voltage substation, offshore wind energy will be fed into TenneT’s Randstad 380kV South ring. The wind energy goes to the electricity consumers in the country via the national high-voltage grid.