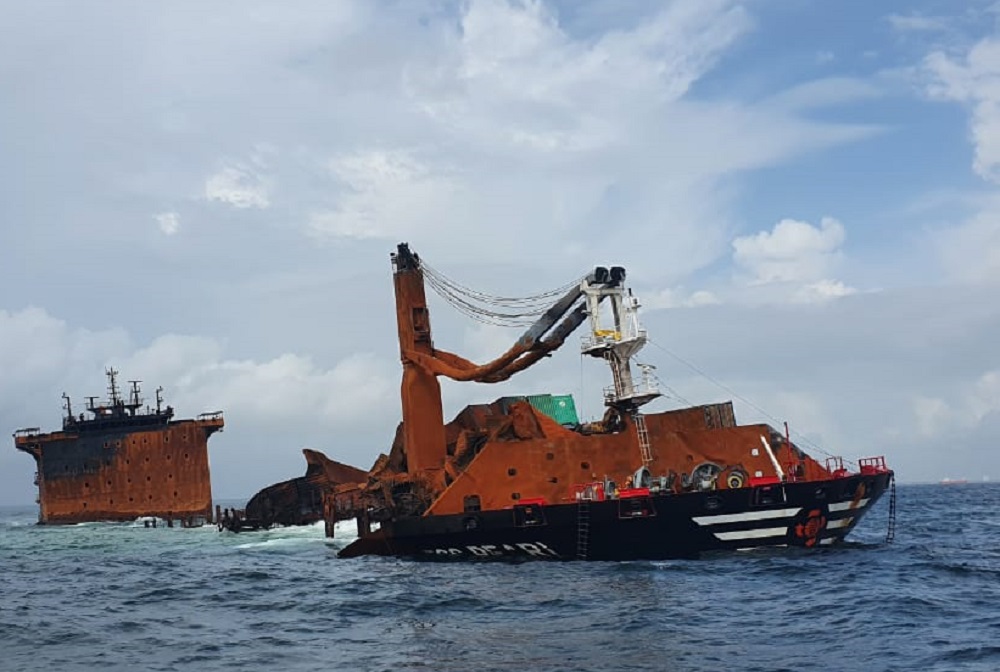 X-Press Feeders, operator of the X-Press Pearl, has confirmed that the container ship’s bow and forecastle deck are now submerged. So far, there has been no fuel oil pollution, but a grey sheen has been observed around the ship of which water samples have been taken. In the meantime, Sri Lanka has demanded USD 40 million from the shipping company for its firefighting, rescue and clean-up efforts.

The X-Press Pearl caught fire on 20 May while waiting at the outer harbour of Port of Colombo for a berth to carry out scheduled container handlings. After thirteen days of firefighting, the fire was contained. Due to bad weather and structural damage, however, its sinking could not be prevented.

The ships aft portion remains on the seabed at a depth of about 21 metres, according to X-Press Feeders. Inspections thus far by Sri Lankan Navy divers have found no evidence of a breach to the ships fuel oil tanks. Observations from the salvors who remain on scene with the Sri Lankan Navy and Indian Coastguard are that there has been no noticeable fuel oil spill.

A grey sheen continues to be observed emanating from the vessel. Discolouration of the sea has been apparent since the vessel’s stern became submerged, and the remnants of the cargo in the 1486 containers that were onboard were exposed to water. Water samples are currently being tested.

The salvors will remain on scene to deal with any possible debris supported by the Sri Lankan Navy and the Indian Coast Guard, who have oil spill response capabilities on standby.

The claim issued by the Sri Lankan Government is a preliminary claim with further compensation forthcoming. According to Dutch transport news website NT.nl, the Sri Lankan authorities have also arrested the Russian captain. He was released on bail with the authorities confiscating his passport to keep him available for further interrogations.

Sri Lanka wants to find out what the cause of the fire was. It has been reported the ship was struggling with a container of leaking nitric acid and had already been refused entry to ports in Qatar and India before the fire broke out.