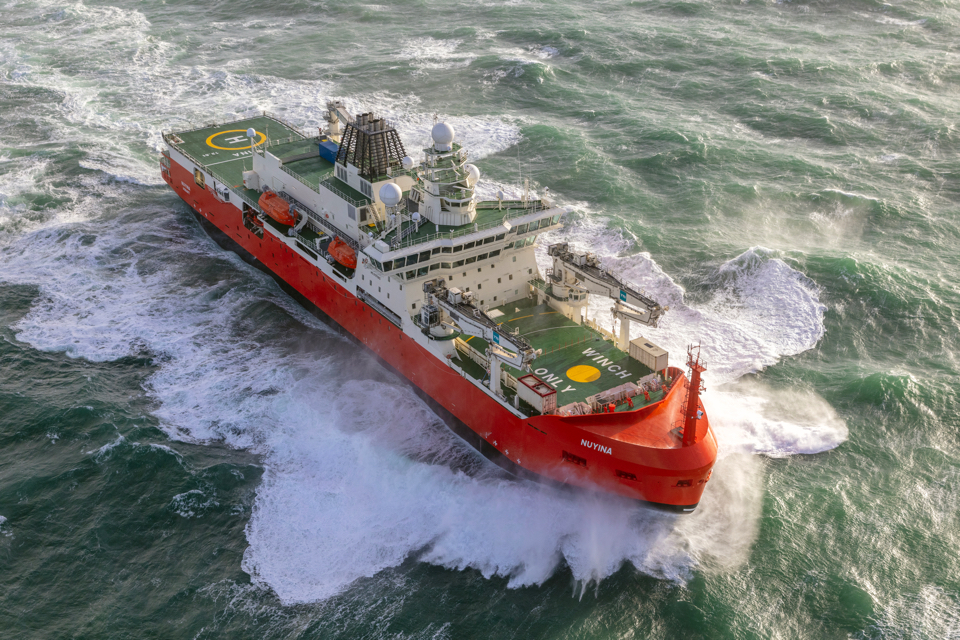 Dutch shipbuilder Damen Naval has been responsible for the design and construction of the Antarctic icebreaker RSV Nuyina for Australia since 2016. After a period of construction in Romania and commissioning and sea trials from Vlissingen, the Netherlands, the research vessel is now ready for its first trials near the North Pole.

The RSV Nuyina will be the main supply ship for the Australian Antarctic and sub-Antarctic research stations. It will also be a complex platform for scientific research in Antarctica and the Southern Ocean. The ship was built as part of the “Australian Antarctic programme“. One of its main functions is to find marine organisms and map the seabed. To this end, the Nuyina has various acoustic instruments installed in the hull.

For these instruments to work properly, a relatively quiet underwater environment must be created. A challenge for an icebreaker with extra-large engines and propellers. Therefore, based on knowledge of the construction of Dutch naval vessels, a lot of work has gone into the design of the hull and the propulsion system. This is to reduce the noise of the engines, gearboxes, propellers and the formation of bubbles under water.

The Nuyina is the only ship in the world that has a “wet well” for seawater research into krill and other vulnerable organisms. In addition, it has the facilities to carry out sea ice and ice cap research. The ship also serves as a base for people or equipment to be transported by helicopter to remote locations on the Antarctic ice cap.

Damen Naval is overall responsible for the design, engineering and construction, and various subcontractors and suppliers from the Netherlands have also been involved. As such, this project has made an important contribution to the innovative capacity of naval architecture in the Netherlands, according to Damen.

The ship will depart within weeks for its sea trials in the Arctic region and will then sail on almost immediately to Australia.