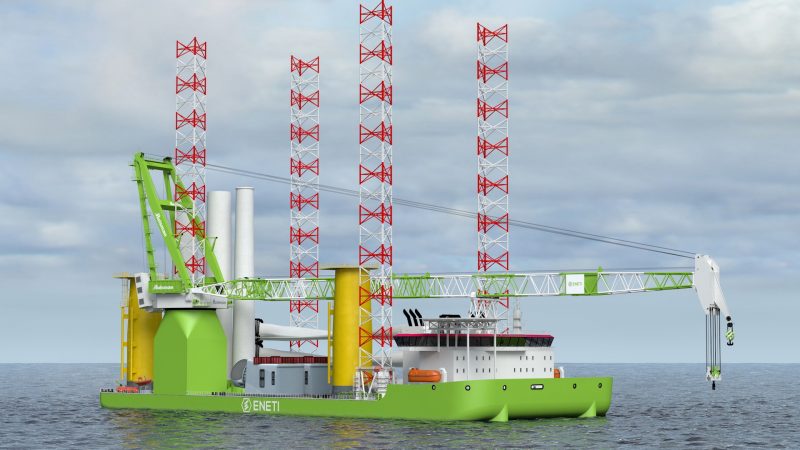 US-based Eneti Inc, formerly Scorpio Tankers, has ordered a groundbreaking offshore wind installation vessel in Korea. The ship will be able to install wind turbines of up to twenty megawatts at sea and was designed by GustoMSC.

The wind turbine installation vessel (WTIV) is currently known as the NG-16000X after the design by the engineering firm GustoMSC based in Schiedam, the Netherlands. It will be built by Daewoo Shipbuilding and Marine Engineering and is scheduled for delivery shortly after mid-2024.

The contract price is USD 330 million and Eneti has an option to build a second one for the same price. The crane, with a lifting capacity of 2600 tonnes, will be delivered by Huisman, also from the Netherlands, which works closely with GustoMSC. It will be a so-called leg encircling crane, which will be built around one of the ship’s extendable legs.

The largest wind turbines currently on the market have a capacity of approximately fifteen megawatts and a tip height of over 250 metres. It is expected that the first twenty-megawatt wind turbines will come onto the market around 2025. It is unclear whether Eneti already has contracts, or letters of intent, for the installation of these wind giants.

The group is also working on plans for a similar “Jones Act” ship for the US market. CEO Emanuele Lauro says he is in talks with several American shipyards about building such a WTIV, which would have to be American-built, financed and crewed. As American shipbuilding prices are far above those in Asia, such a ship would in all likelihood be much more expensive.

Recently, Huisman presented a design for a Jones Act feeder ship for this market, which would supply non-US installation vessels in US waters. In this way, the Jones Act could be circumvented and, according to Huisman, installation costs could be reduced by dozens of per cent.

A fortnight ago, the London-based data supplier IHS Markit warned that the increase in scale of wind turbines in the coming years will probably be faster than the installers can keep up with. According to the agency, by 2026 at least four vessels of the size that the listed company Eneti is now having built will be needed. American Dominion recently commissioned the construction of the first Jones Act ship worth half a billion dollars.