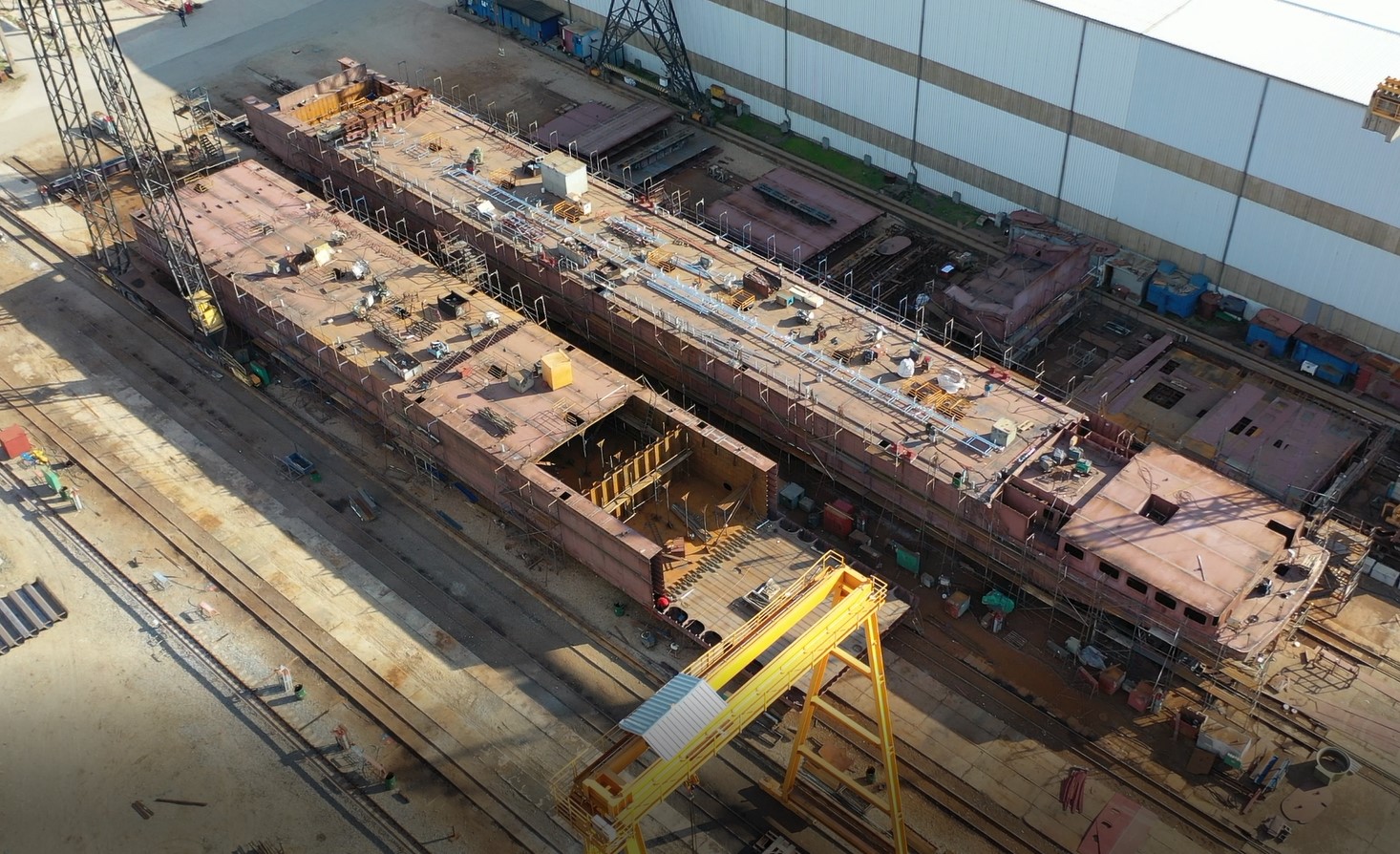 Concordia Damen Shipbuilding BV spent approximately eighteen months developing the major new inland shipping project “Parsifal”. The project involves the construction of a series of forty inland navigation tankers. The ships have an environmentally friendly design and can continue to sail safely when water levels on the Rhine are low.

The project was contracted by investors in November 2020. After delivery, the tankers will sail under the Dutch flag in “bareboat” charter for Royal Dutch Shell with mineral and chemical products. The Rotterdam based tanker shipping company VT-Group, owner of thirty tanker barges, and the Dutch branch of the Cypriot ship management company Marlow Navigation (MNN) are responsible for the operational management.

The name Parsifal is a fitting name for this construction project because the vessels will sail on the Rhine corridor and its tributaries. The German composer Wagner also named his last opera Parsifal.

The ship design is partly taken from the Sendo Liners, inland container ships delivered by Concordia Damen. This type of ship received the KNVTS Ship of the Year Award in 2019. DJ Marine and RSN are the naval architects and Ghenova Engineering from Spain created the 3D animation for the outfitting installation works. Artist impression of the Parsifal tanker currently under construction.

The ships will be built at two shipyards: 39 hulls will be built at Shipyard Kladovo, owned by shipbroker Gebr. de Jonge BV in Serbia since 2007, and one hull, of which the keel was laid on 3 February 2021, is under construction at Shipyard De Hoop Lobith in the Netherlands. This is in order to stick to the planning of the entire newbuild fleet at Werkendam in the event of obstructions and/or locks repairs on the fairway route from the Danube via the Main and Rhine to Werkendam.

On 20 January 2021, the first keel was laid in Kladovo. At this shipyard, the ships are already equipped with the piping, cooling system, bow thruster and stern tubes. The hulls will also be fully conserved there by Cornet Service BV from Werkendam.

The first hull is expected in Werkendam in June to start final outfitting. Because a lot of work has already been done during construction, final assembly can be shortened by three weeks. Subsequently, a hull will come to Werkendam every month. During this finishing period, five to seven hulls will be moored together at the harbour of Werkendam. Construction number forty will then be delivered at the end of 2024.

The total number of tankers per Rhine bordering country (source: CCNR 2019) is 1443. Of these, 1111 vessels are registered with an ADN Certificate. The ADN (Accord Européen relatif au transport des marchandises dangereuses par voies de navigation intérieures) is the European agreement for the international transport of dangerous goods by inland waterways established by the UNECE (United Nations Economic Commission for Europe) in Geneva.

The Parsifal project adds about 3.6 per cent capacity to the European tanker fleet based on 2019 statistics.

The river Rhine is the second-longest river in Central and Western Europe (after the Danube). It is one of the major European rivers, which has its sources in Switzerland. The river begins in the Swiss canton of Graubünden in the southeastern Swiss Alps and flows through the German Rhineland and the Netherlands and eventually empties into the North Sea.

As it approaches the Dutch border, the Rhine has an annual mean discharge of 2290 m3/s (81,000 cu ft/s) and an average width of 400 metres (1300 ft). Between Bingen am Rhein and Bonn, the Middle Rhine flows through the Rhine Gorge, a formation created by erosion. The rate of erosion equalled the uplift in the region, such that the river was left at about its original level while the surrounding lands raised.

The gorge is quite deep and this stretch of the river is known for its many castles and vineyards. It is a UNESCO World Heritage Site (2002) and known as “the Romantic Rhine”, with more than forty castles and fortresses from the Middle Ages and many quaint and lovely country villages.

Today, the Rhine is a river of rain and melting ice. The water levels vary every day. Every morning, the German waterway authority sends out water level forecasts by e-mail for the various places along the Rhine. For some places, a five-day forecast is also available.

The most critical stretch of water to pass through during low water is in the area of Kaub/KMR 549,400. To calculate the correct safe depth during passage, approximately 100 centimetres should be added to the water level at Pegel Kaub. The average current of the river during medium water levels is about 5-6 km/hr. During high water levels, the downstream current is about 9-11 km/hr. This means the speed over ground (SOG) of the barge is always less during the upstream sailing voyage.

Concordia Damen’s design takes into account the different water levels and current speeds along the entire Rhine corridor between Rotterdam and Switzerland. The design is such that the vessels can still sail responsibly in extremely low water with cargo on board. The ship can even sail with an empty draught of 1.17 metres.

In the engine room, there will be two MAN-Rollo LNG engines, type E3262 LE201, 495 ekW. The LNG tank with a capacity of 60 cubic metres is located in a separate room (tank space) at six metres distance from the bow and directly in front of the cofferdam of the cargo area. The vent of this space is located on the foredeck seven metres from the cargo zone. This combination of construction and location creates a strong crumple zone that does not exceed the collision force of 1 G in the event of a possible head-on collision.

The LNG tank (pressure 10 bar, -161°C temperature) is connected with double walled gas transfer pipe. The caloric value of LNG is 0.4 compared to 200 litres of gas oil. This improves the hydrodynamics and the carrying capacity in the bow. The bow has a Veth bow thruster, type VSG-1200L of 400 kW.

The venting of the LNG tank space must be seven metres from the cargo area. This is a technical construction requirement laid down in ES-TRIN 2021 rules. An extensive hazard study for safety zones 0-1-2 has been carried out.

In the aft engine room, there are two Oswald electric motors of 500 kW each, type TF46.100-24WWR (PM Synchron), supplied by Hybrid Ship Propulsion and coupled to the two propeller shafts. This torque motor is a permanent magnet motor, annular geometry with hollow shaft and rare-earth magnets. The coolant standard is water in a closed circuit, antifreeze. In the aft engine room there is also a MAN-Rollo 277 ekW diesel generator set, type D2676LE328.