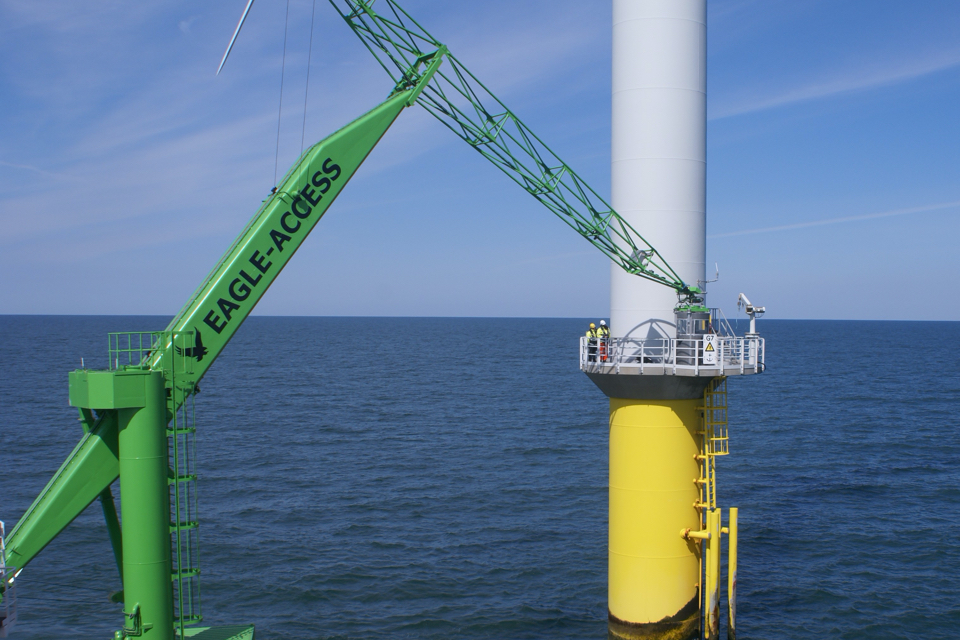 Over the past three weeks, Eagle-Access has tested its new access system on the VOS Star at the Danish offshore wind farm Horns Rev.2. Around 150 people were transferred and about 300 transfers with and without cargo were conducted.

The system in the stand-alone version proved to be safe, comfortable and reliable during offshore testing. People are transferred in a closed cabin from deck to platform and vice versa. The switch from people to cargo transfer is done in seconds. The ability to transfer cargo without it swinging and the remotely controlled disconnecting of the cargo onto the wind generator platform was demonstrated. This novelty avoids the presence of operators on the platform to guide and release the cargo.

The fully electric driven system offers extremely precise motion control, which allowed it to access the extremely small TP landing surface at Horns Rev.2. This is further supported by cameras and object detection.

Eagle-Access allows a wide range of 270 degrees of possible vessel headings. For testing reasons, not only the most common and comfortable headings, but also the more unfavourable vessel headings were chosen. Optimal headings for the vessel are always possible due to the large reach and mounting on the aft of the vessel and 360 degrees rotation of the system.

The vessel used for the sea trials was the relatively small VOS Star, a DP2 vessel of 68 x 15 metres. After being brought to the quay in IJmuiden by road transport, the Eagle was installed on the vessel deck in one day. Once installed, it was immediately available and used for deck-to-quay handling of one-tonne loads.

The company based in IJmuiden, the Netherlands, has a digital twin of the Eagle in its offices in IJmuiden, which is used to guarantee operability on a vessel before signing a contract and offer a realistic hands-on training to future Eagle operators.