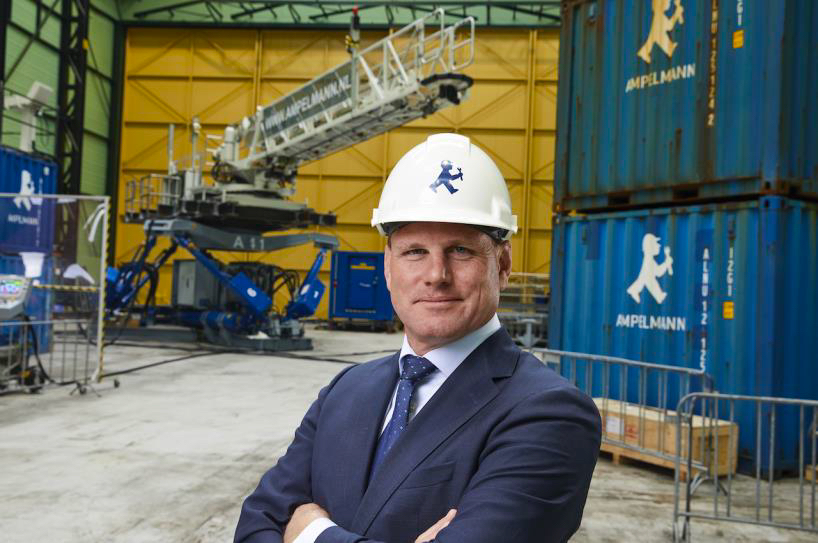 The Dutch engineer, entrepreneur and inventor Jan van der Tempel has been nominated for the European Inventor Award 2021 in the category Industry. The European Patent Office (EPO) announced this on Tuesday. Van der Tempel developed a stable gangway, the Ampelmann, for transferring people and goods between ships and offshore constructions, thereby increasing safety at sea.

Van der Tempel commercialised his invention by founding a university spin-off that has grown into a company that exploits the access system and related services around the world. Today, more than 65 such systems are deployed worldwide and the system has successfully transferred more than six million offshore workers and 17 million pounds of cargo.

‘Van der Tempel has not only developed innovative technical solutions for the offshore industry. He has increased safety for the people working in this sector, improved efficiency and reduced costs for operators,’ says EPO President António Campinos, during the announcement of the nominees for the European Inventor Award 2021. ‘The patent system supports inventors like Van der Tempel. By combining technical innovation with effective legal protection, his company has become a world leader in the offshore transfer sector.’

Accessing offshore structures, such as a wind turbine or an oil platform, from a ship can be challenging due to the motion of the ship relative to the offshore structure. Unstable weather can make things even more complicated and often leads to the cancellation of transfers, which costs time and money.

Van der Tempel, trained as an engineer in Offshore Wind, came up with the concept for his stable gangway system – the Ampelmann – in 2002 during an offshore wind conference in Berlin and named it after the iconic figure on the pedestrian crossing lights in this city (Ampelmann means ‘traffic light man’). Van der Tempel imagined a kind of inverted flight simulator on ships; instead of simulating movements corresponding to computer-generated images in a stationary environment, he focused on technology that would generate stability in a turbulent environment.

The idea evolved into today’s access system, which can be compared to a trunk connecting an aircraft to the gate. Employees ‘can walk to work’ and cargo can be transported easily, even in heavy weather. The technology developed by Van der Tempel works by detecting and monitoring the movements of the (supply) vessel.

A motion sensor the size of a shoebox is installed on the ship that is connected to a powerful computer system to measure motion accurately and quickly. This data is fed to a platform construction with six hydraulic cylinders that immediately adjust their lengths to compensate for any movement. In this way, the gangway remains stationary and provides a secure connection to the offshore structure even when the vessel is being tossed about by waves and wind.

The system can be installed on any vessel or floating structure in approximately eight hours and operates at wind speeds of up to sixty kilometres per hour and waves of up to four metres. This means fewer cancellations due to bad weather and less need for expensive and potentially risky helicopter transfers, which require workers to undergo specialised safety training.

In addition, the system provides a back-up for every component and in the event of a failure, the system will continue to operate for one minute before shutting down, giving personnel enough time to get themselves to safety. According to Van der Tempel, offshore employees walk to work just as easily as they cross the street.

After the success of the prototype he developed at TU Delft, Van der Tempel applied for a patent to protect his invention. He obtained a first European patent in 2012 and a second in 2014.

‘Our solution is the only one with cylinders that work in six directions and reach a full stationary point with only millisecond delays,’ says Van der Tempel. ‘The patent ensured the protection of that concept, which gave us as a company a huge advantage on the market over competitors. It has allowed us to grow, gain the trust of customers and make our company what it is today.’

From university spin-off to market leader

Initially, Van der Tempel only planned to develop the technology and then find a company to build and use the system. As he failed to find a party interested or able to fully understand the commercial potential, he eventually decided to start his own company through Delft University of Technology.

In 2007, Ampelmann Operations was established, which in just under ten years has become a major global player in the offshore access market. As much of the development took place within TU Delft, scaling up the invention required relatively low capital expenditure. Loans from the Dutch government were secured, but large external investments were not required.

‘Ampelmann managed to generate its own cash flow almost immediately, so the company grew rapidly and doubled each year in the first six years,’ says Van der Tempel.

Although most of Ampelmann Operations’ projects are in the oil and gas industry, the company also has a strong track record in offshore wind, a sector that is expected to grow significantly until 2050. The operation and maintenance costs of offshore wind turbines are the main expense for companies in this sector, including lost revenue due to delays and repair problems. The Ampelmann can reduce these costs.

With the increasing global market for offshore wind operations and maintenance (expected growth of seventeen per cent and revenues of EUR 11 billion by 2028), Ampelmann Operations is well positioned to benefit from the shift to renewable energy sources.

The winners of the 2021 edition of the EPO’s annual innovation prize will be announced on 17 June at 7 pm at a public digital ceremony that will be visible around the world. The other two nominees in the category Industry competing with Jan van der Tempel are Per Gisle Djupesland (Norway, Better nasal drug delivery) and
Christoph Gürtler, Walter Leitner and team (Germany, Using carbon dioxide to make greener plastics).