Nodules collected 4.5 kilometres below the surface in deepsea mining trial 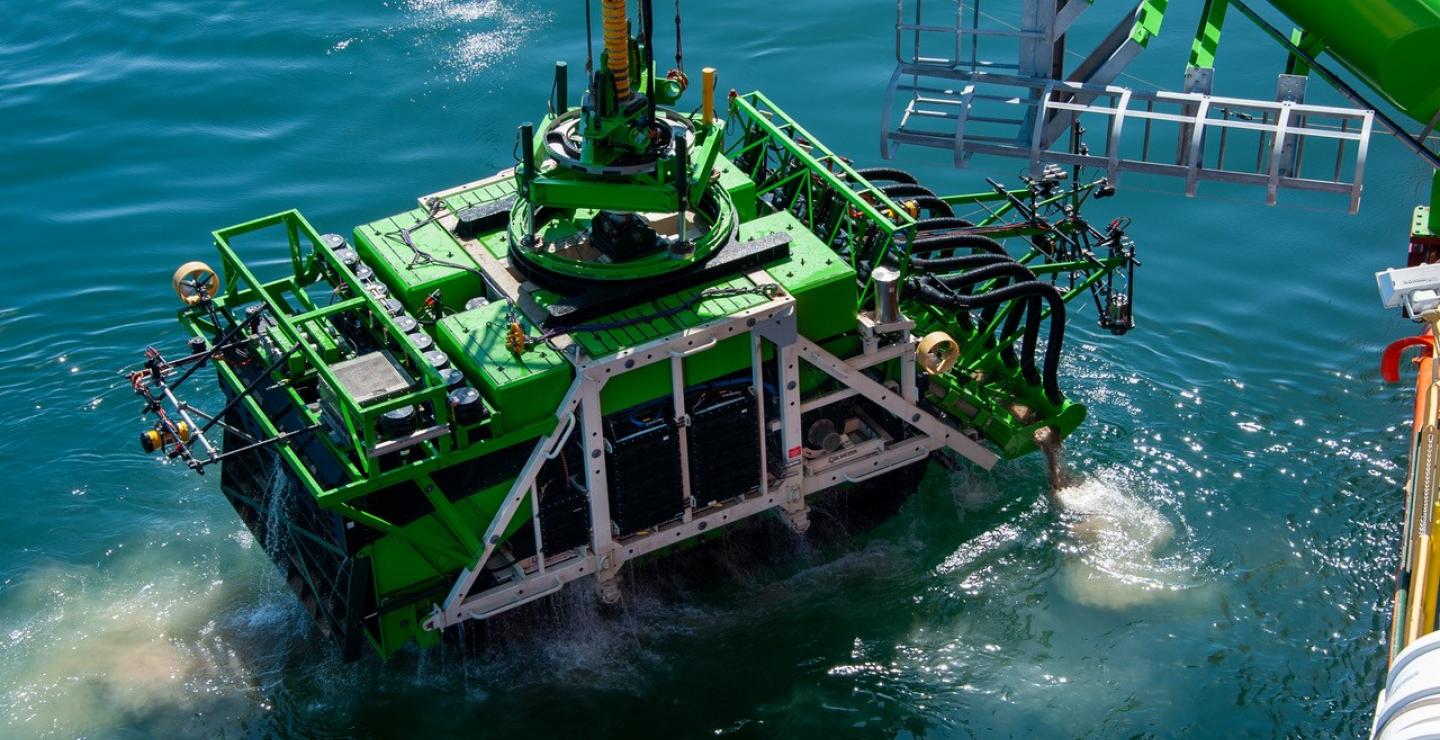 In a landmark feat of modern engineering, rock-like nodules, rich in nickel, cobalt, manganese and copper, have been collected by an underwater robot during a scientific trial in the deep Pacific Ocean. The pre-prototype nodule collector developed by Global Sea Mineral Resources retrieved the nodules from 4.5 kilometres beneath the sea surface.

First discovered almost 150 years ago during HMS Challenger’s epic voyage to chart the ocean, polymetallic nodules could become critical to meeting climate change goals and supporting sustainable development. Billions of such potato-sized polymetallic nodules lie on the ocean floor. It is believed they contain more nickel, cobalt and manganese than in all land-based reserves combined.

This sea trial is a world-first and was observed by scientists from 29 European institutes. The nodule collector, named Patania II, is equipped with environmental sensors and cameras. The data and samples collected during the trial will expand understanding of the real-world environmental effects of collecting nodules. To date, scientists have had to rely solely on hypotheses, less realistic field and laboratory simulations and computer models.

The deep seabed minerals industry remains in the exploration, research and development phase. Over the coming years Global Sea Mineral Resources (GSR), which is the deep-sea exploratory division of the DEME Group, will ensure that the necessary detailed scientific work is carried out before any commercial activity takes place.

The company seeks to discover whether polymetallic nodules could become one of the most environmentally and socially responsible ways of sourcing the metals the planet needs. The scientific trials are central to that quest and will help ensure that decisions are made on the best available scientific evidence.

‘The climate and biodiversity crises are coinciding with a massive increase in global population,’ says Kris Van Nijen, managing director of GSR. ‘Decarbonising a rapidly urbanising planet will require huge amounts of primary metal. This in turn will add to the carbon budget and impact biodiversity. Different solutions have different implications. Society needs to confront this reality so that these metals can be sourced in the most responsible way possible, for the benefit of us all.’

He adds: ‘This successful trial demonstrates that polymetallic nodules can be collected from the seafloor. Now we await the results of independent analysis so we can refine our technology and environmental plans. All indications to date point to polymetallic nodules having the potential to become one of the most responsible ways to help meet the world’s spiralling demand for metals.’

Environmental monitoring is a key component of GSR’s development programme, ensuring the effects of its activities are understood, can be accurately predicted and improved upon, and can lead to the development and implementation of responsible environmental management strategies. The company says that before deep seabed mining occurs at a commercial scale, it needs to be clearly demonstrated that such activities can be managed in a way that ensures the effective protection of the marine environment.

‘Recent reports have suggested that some automotive brands have ruled out the use of seabed minerals in their supply chains,’ says Van Nijen. ‘They haven’t. They have simply said that the risks of deep sea mining need to be comprehensively understood first. We agree and that is exactly what trials like the current one will help to achieve.’

GSR is collaborating with the European research project MiningImpact. Scientists from 29 European institutes are joining efforts with the German exploration contract holder, BGR (Federal Institute for Geosciences and Natural Resources), to independently monitor the trials to help understand the environmental effects of collecting mineral resources from the seafloor.

The studies being conducted by the MiningImpact consortium will not only address the direct effects of collecting polymetallic nodules, but also those of the sediment plume created by the process. The data will provide information on ecosystem effects of potential future mining that cannot be drawn from the small-scale experiments conducted in the past.

By employing state-of-the-art scientific equipment researchers are able to determine the spread of the sediment plume and how it resettles. They are also able to survey the loss of biodiversity across different faunal classes. GSR is also conducting environmental monitoring from its vessel.

Among the specialised instruments that were deployed during the expedition are two remotely-operated vehicles (ROV), two autonomous underwater vehicles (AUV), in situ oxygen profilers and experiment chambers, in situ pumps, as well as fifty inter-calibrated hydro-acoustic and optical sensors for measuring the suspended sediment concentrations and particle sizes.

Patania II, named after the world’s fastest caterpillar, is a 25-tonne ultra-deepwater robot on tracks. It was successfully deployed for the first time at 13:30 Pacific time on 18 April. The robot was lowered from a surface vessel via a five-kilometre-long power and two-way communications cable in an operation that took four hours. On 20 April, after approximately fifty hrs on the seabed, Patania II was successfully returned to the vessel.

On the seafloor, Patania II demonstrated its ability to traverse the seabed, collecting nodules as it moved. The nodule collection system consists of a collector head, jet water pumps and a collection drum, while sensors monitored the entire process. On this mission, Patania II is not connected to a riser pipe to bring the nodules to the surface, only the seafloor nodule collector is being trialled and monitored at this stage.

The next mission – planned for 2024 – will see a system integration test consisting of a full-scale prototype seafloor nodule collector along with a riser to bring the nodules to the surface. Learnings from the Patania II trial will be incorporated into the next phase.

The first deployment and functionality check of Patania II will be followed by several more “dives” over the next few weeks in the Belgian and German contract areas of the Clarion Clipperton Zone (CCZ). The CCZ is a six million square kilometre region of the Pacific Ocean between Mexico and Hawaii.

The International Seabed Authority (ISA), established in 1994, is mandated through the UN Convention on the Law of the Sea (UNCLOS) to organise, regulate and control all mineral-related activities in the international seabed area and for the benefit of humankind as a whole.

No State or entity can explore the seabed or collect nodules except under contract with the ISA. To date, the ISA has awarded eighteen exploration contracts in the CCZ. The contractors who hold these fifteen-year licenses represent nations including China, Japan, Russia, France, UK, South Korea, Germany, Poland, Jamaica, Cook Islands, Nauru, Tonga and Belgium. All exploration contract holders are undertaking geological and environmental studies as part of their contractual obligations.

The ISA is in the process of developing regulations for commercial activity and any contractor wishing to undertake mining operations in the international deep seabed area will need to abide by these strict regulations.

The regulations incorporate specific provisions to ensure the effective protection of the marine environment and conservation of marine biodiversity, human health and safety, and a system of payments, which aims to ensure the equitable sharing of financial and other economic benefits derived from seabed minerals. The regulations must be agreed and adopted by the ISA Council and approved by the ISA Assembly, comprised of 167 member states and the European Union.

Never before has so much thought gone into regulating an industry before it even exists.