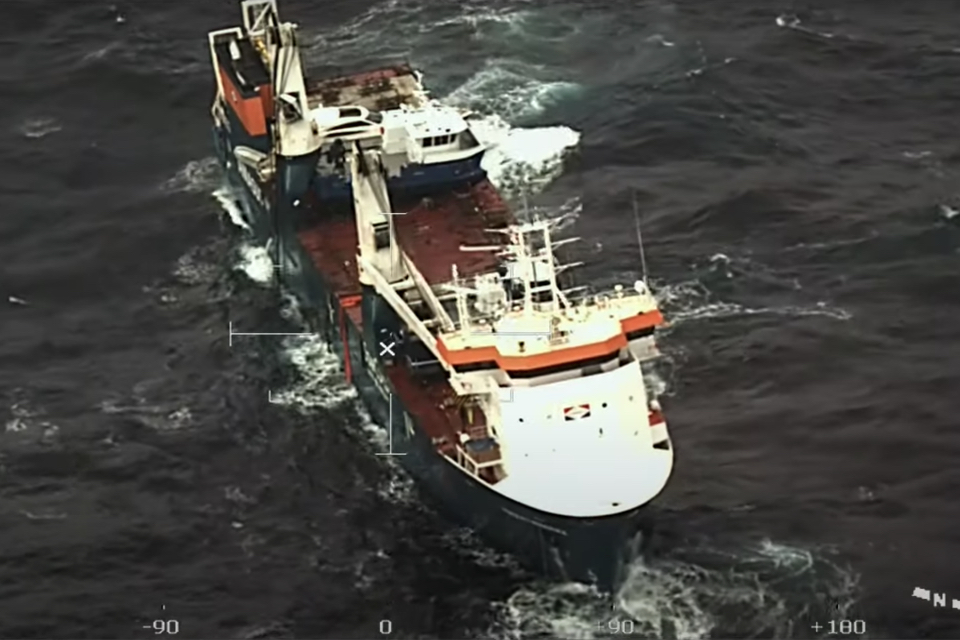 With waves of fifteen to eighteen metres high and much wind, the Norwegian Coast Guard says that for now it can do nothing but watch the Eemslift Hendrika. The ship has been adrift off the Norwegian coast since yesterday evening. The Coast Guard will try to get crew on board the vessel on Wednesday when two tugs will also arrive.

On Monday, the ship got into difficulties due to shifting cargo, which caused it to list in a stormy sea with waves several metres high. The crew was taken off board by helicopter. The Eemslift Hendrika, owned by the shipping company Amasus Shipping in Delfzijl, the Netherlands was en route from Bremerhaven in Germany to the Norwegian port of Kolvereid.

According to the Coast Guard, the ship is still operating, and is located forty to fifty nautical miles west of Ålesund. Coast Guard vessel Sortland is still on site and monitors the situation.

The workboat that was standing in the middle of the deck has fallen off the ship, and is a few nautical miles from the Eemslift Hendrika. The disappearance of the work boat is believed to have had a positive effect on the stability of the Eemslift Hendrika, and may help to avoid capsizing.

The Norwegian Coast Guard says it is in contact with the shipping company in the Netherlands, and has regular meetings with them. The organisation has assisted in finding resources in Norway, and the shipping company has engaged two tugboats, which will depart from Bergen and Kristiansund tonight. These will be at the casualty at 3-4 o’clock tomorrow morning (Wednesday 7 April). If weather and wind allow it, personnel will be transported on board the listing ship to have a tow attached. The ship is then scheduled to be towed ashore.

The Norwegian Coast Guard is also preparing resources for a possible helicopter lift of Smit Salvage crew to the Eemslift Hendrika. Furthermore, the organisation maps resources, both vessels and trained people for a possible oil spill response operation if the vessel should hit land and ground. At the moment, it is just over a day until this can occur, but it is likely that a tow will be connected before that. In that case, the Norwegian Coast Guard says it will escort the tow with the Sortland, and put its own pilots on board the tugs whenever possible.