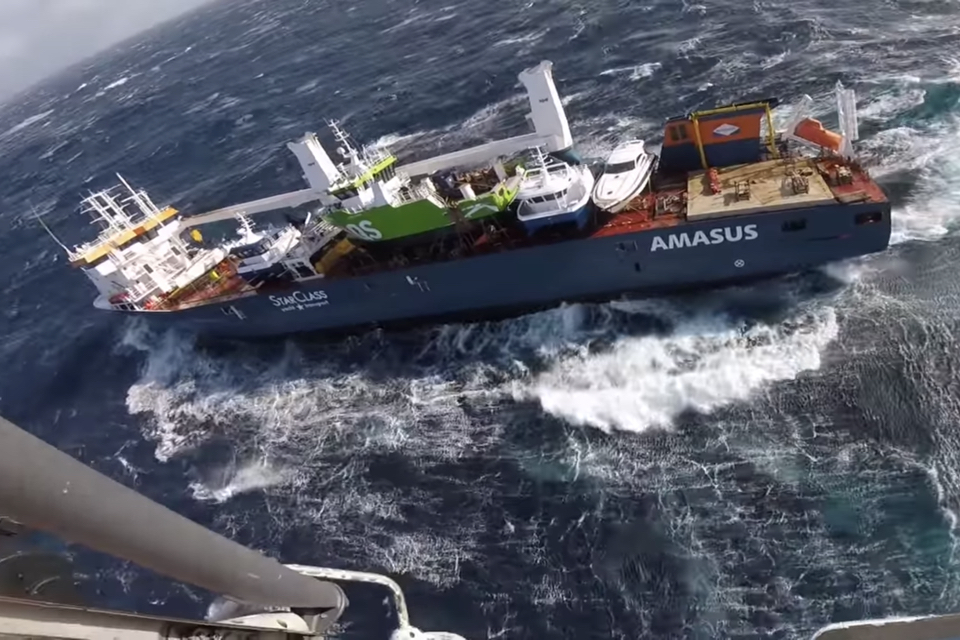 A multi-purpose vessel sailing under the Dutch flag ran into trouble off Norway on 5 April. It concerns the Eemslift Hendrika co-owned by Amasus Shipping in Delfzijl, the Netherlands. The cargo on board has shifted and the ship is listing. A rescue helicopter has taken the crew off the ship, meaning it is now adrift and at risk of capsizing.

Initially, only eight crew members were evacuated, while the other four remained on board to try to stabilise the ship and monitor the situation. On Monday evening, it was reported the other four were also taken off the ship after the ship lost engine power.

‘The situation is that the vessel lost propulsion on the main engine early last night, and is now drifting towards the shore. At the same time, the vessel has a fairly large list, so it is fairly serious out there,’ Hans-Petter Mortensholm at the Norwegian Coast Guard told Norwegian news channel NRK.

The Norwegian Coastal Administration and the shipping company are said to be working on a further plan for handling the vessel.

‘What is important now is that we get measures taken so that we can prevent the vessel from posing an environmental hazard. This is our main focus. There is a risk that the vessel may capsize and sink. The vessel has heavy oil on board and diesel,’ Mortensholm added.

The ship lies about sixty nautical miles west of the Norwegian town of Ålesund. The weather is extremely bad in the area, with waves up to fifteen metres high. The Norwegian Coast Guard (Kystverket) is sending its vessel Sortland to the ship as well as its surveillance aircraft to monitor the situation.

Four crew rescued from the sea

According to a spokesperson for Amasus Shipping, the cargo broke loose west of Ålesund. Water entered the hold causing the ship to list, reported Dutch TV channel RTV Noord. After moving ballast, the crew initially managed to get the ship stable, but later the ship was listing again.

The Eemslift Hendrika was built in 2015, is 112 metres long and 17 metres wide. It was en route from Bremerhaven to Kolvereid, Norway. On the video it can be seen the ship is carrying several smaller vessels on deck. According to Maritime Bulletin the boats on deck were the cargo that shifted causing the heavy list.

Picture: Video still from the YouTube video by Hovedredningssentralen Sør-Norge.