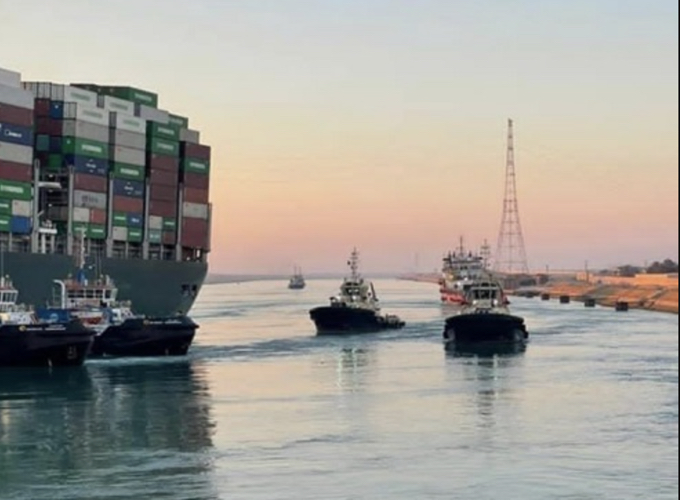 The rescue operation to refloat the grounded ship in the Suez Canal is expected to resume around 11.30 am on Monday morning. The stern of the ship has already been pulled loose. That was the easiest part of the operation, according to maritime services provider Boskalis, which sent a salvage team to help with the job. Pulling the bow loose is the difficult second part.

According to the Suez Canal Authority, the Ever Given is about eighty per cent back in its ‘normal position’, indicating some success in the rescue efforts. However, according to Peter Berdowski, Boskalis’ CEO, it is still quite a job to get the 224,000-tonne vessel completely unstuck.

As soon as the container ship is loose, it will be moved to the Great Bitter Lake for technical inspections, the canal authority said. The Ever Given, which is longer than the canal is wide, has been trapped in the waterway since Tuesday 23 March. The problems are causing further disruption to global supply lines, which were already under pressure from the corona pandemic.

A fleet of ten tugs was deployed in the earlier salvage attempt on Monday. This after salvage teams had been using excavators and dredges for days to try and free the grounded ship. Smit Salvage had two stronger tugs sent to the scene. This includes the Dutch ALP Guard with a bollard pull of 285 metric tonnes, which made it possible to free the stern of the ship.

A week to get 450 ships out of Suez Canal corridor

Egyptian authorities are hopeful that shipping traffic in the Suez Canal can be resumed soon. ‘Today we are starting our plan for all ships to cross the canal,’ said Mohab Mamish, advisor to Egyptian President Abdel Fatah al-Sisi. ‘It may take about a week to get all ships out of the Suez Canal corridor.’

At the last count, about 450 ships were stuck waiting or heading for the waterway, which accounts for about 12 per cent of world trade. Other ships have diverted and are taking the longer route around Africa.

According to a rough estimate, the blockade is holding back about USD 400 million worth of goods per hour, based on calculations by Lloyd’s List. Westbound traffic is worth about $5.1 billion a day and eastbound traffic about $4.5 billion.

Shipping experts expect the already overloaded ocean freight markets to tighten even more in the coming months. This is partly due to the uneven wave of cargo that the ports will have to deal with.

Also read: Suez Canal Authority: Wind not main cause of container ship Ever Given grounding