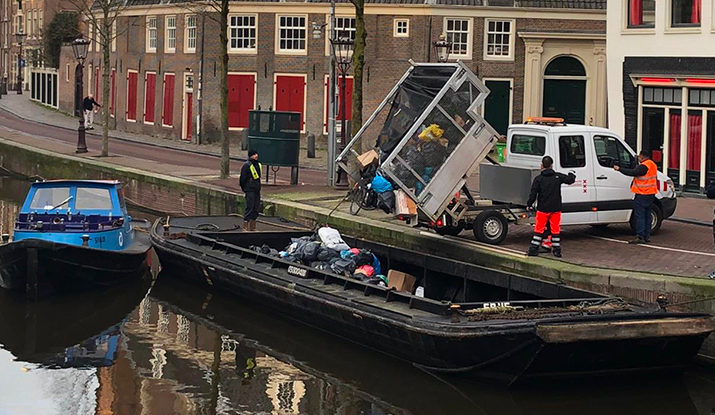 Waste collection boats will be sailing the canals in the centre of Amsterdam the coming half year. In the Red Light District and Nieuwmarkt area, experiments will be conducted with the electric rubbish boats, which may become an alternative to heavy rubbish trucks.

Residents can put their rubbish on the street as usual. Small trolleys collect the rubbish bags and dump them on one of the boats. The waste is then transported by water to the processor.

In some streets where there is often a lot of rubbish, a small rubbish truck compresses the rubbish. After collecting the rubbish, compact street sweepers drive through the street to clear away the litter and leave the street clean. Water company Waternet ensures that the waste that falls into the canals is immediately removed from the water.

This method of collection is intended to relieve the busy inner city and the weak quays and bridges of heavy rubbish trucks, according to the municipality. In a part of the city centre, underground waste containers cannot be placed because there is not enough room on the street, due to cables in the ground or too weak quays.

In October, the trial will be evaluated together with residents to see whether it can be extended to other areas.