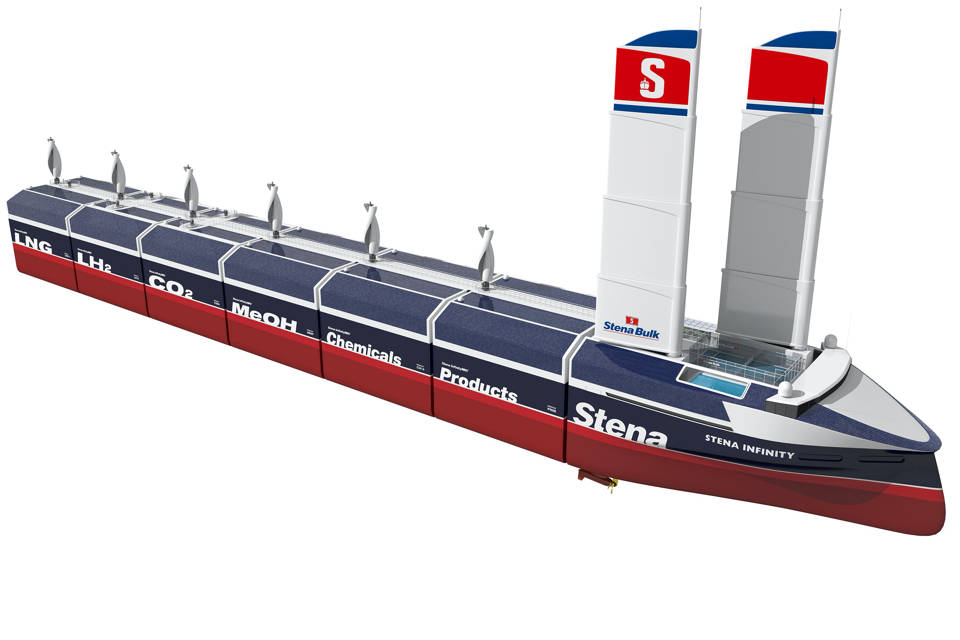 Stena Bulk has revealed a zero emission bulk carrier design called the Infinitymax. It operates on hydrogen, has wind turbines to generate energy and is designed to carry both dry and wet cargoes in modular compartments. Foldable wing sails are also present in the concept.

The company says that the Infinitymax has been created in response to the huge challenges that the global shipping industry must overcome in the coming decades. With the right level of matured technologies, Stena Bulk believes that an Infinitymax vessel could come into service between 2030 and 2035.

The Infinitymax concept will use hydrogen as a marine fuel and wind turbines to generate further energy. Collapsible wing sails and a shark skin hull have also been incorporated in the concept design to significantly improve efficiency.

Although the ships will be crewed for safety and flexibility reasons, Stena Bulk has designed the concept to be semi-autonomous. The company also wants to improve crew welfare on board by changing the role of the crew on board, with less hard labour and more focus on monitoring and interacting with operators ashore.

The ship features standardised and modular cargo units that can carry dry bulk, liquid bulk or liquified gas products – such as methane, hydrogen or ammonia. Each of these units is designed to be totally self-sufficient in terms of energy use, with wind turbines and solar panels generating the electricity needed for internal systems.

The modular units can also be dropped off outside of ports and picked up by tugs, avoiding congestion and reducing call times, according to Stena.

The company expects that by 2050, the growing need for transportation of energy from areas with abundant renewable supply to areas with large energy demand – carried as hydrogen, methanol, methane, and ammonia – will be a defining part of international trade. This, combined with the requirement to transport sustainable, edible oils and chemicals, and carbon dioxide from carbon capture facilities, as well as bulk commodities, have brought the company to this modular design.