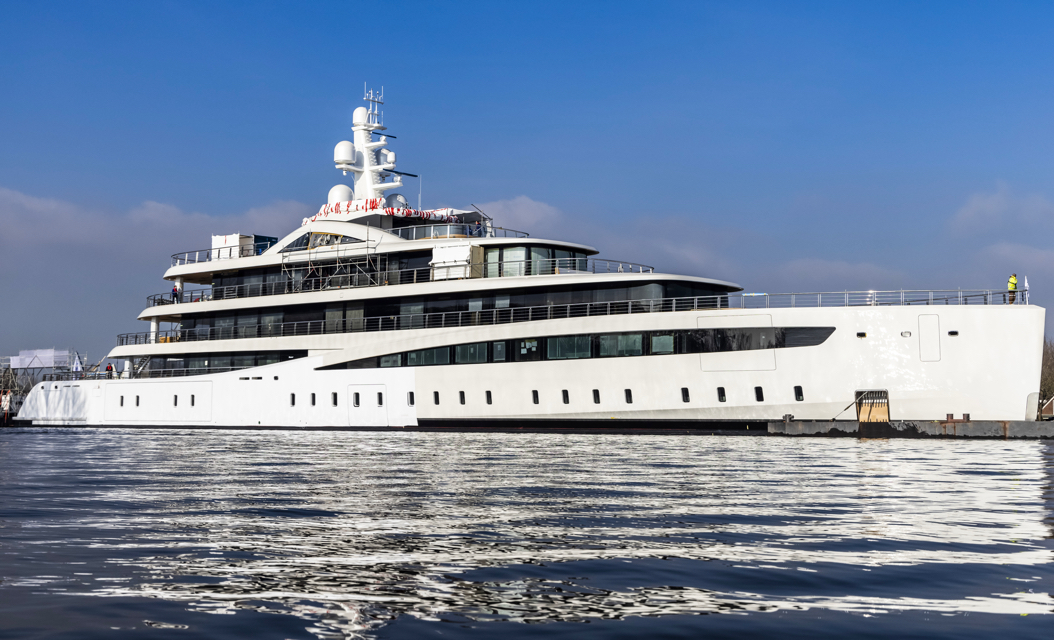 Project 817 has left the Feadship yard in Kaag, the Netherlands, for the first time. The owner set the target of keeping the environmental impact of this 94-metre pure custom Feadship superyacht at around the same levels as his previous Feadship, despite that being 32 metres shorter in length.

One of the ways in which this highly ambitious goal was approached has been to install an advanced hybrid propulsion system. This will allow Project 817 to travel a comfortable 12 knots on diesel-electric power. In this mode, all exhaust emissions are treated via the Tier III catalytic convertors and diesel particulate filters.

Other advanced green technologies deployed include the waste treatment plant and heat recovery systems. An immense amount of work went into optimising the efficiency of the air-conditioning so as to prevent excessive power consumption. This is especially crucial on a yacht with floor-to-ceiling glass windows, something which required taking a different approach to structural design in order to compensate for the complete absence of bulwarks.

These giant edifices in glass are a prominent feature in the remarkable exterior design by Feadship Studio De Voogt and Azure. They also obviously play a key role in the open beach-house-style interior by Peter Marino Architects. The owner’s ‘less is more’ philosophy has influenced every aspect of the design inside and out, with an abundance of clean lines.

For instance, all doors in the sides of the superstructure that would normally be hinged have been fitted as electric sliding doors. Closing flush to the superstructure with no handles, hinges or recesses, this solution has been applied to all crew access, deck locker and guest access doors.

Longest hull doors on a Feadship to date

The pearl-white hull has been designed, engineered and built to be as efficient as possible and reduce the engine power required to move Project 817 through the water. Space has nonetheless been found within the 14-metre beam for the largest tender and longest hull doors seen on a Feadship to date.

Feadship states more details about the superyacht along with its name will be announced after its sea trials have been completed. In videos on Youtube (one can be seen below), it seems the yacht will be named Viva.

Also read: The owners of superyachts built in the Netherlands revealed