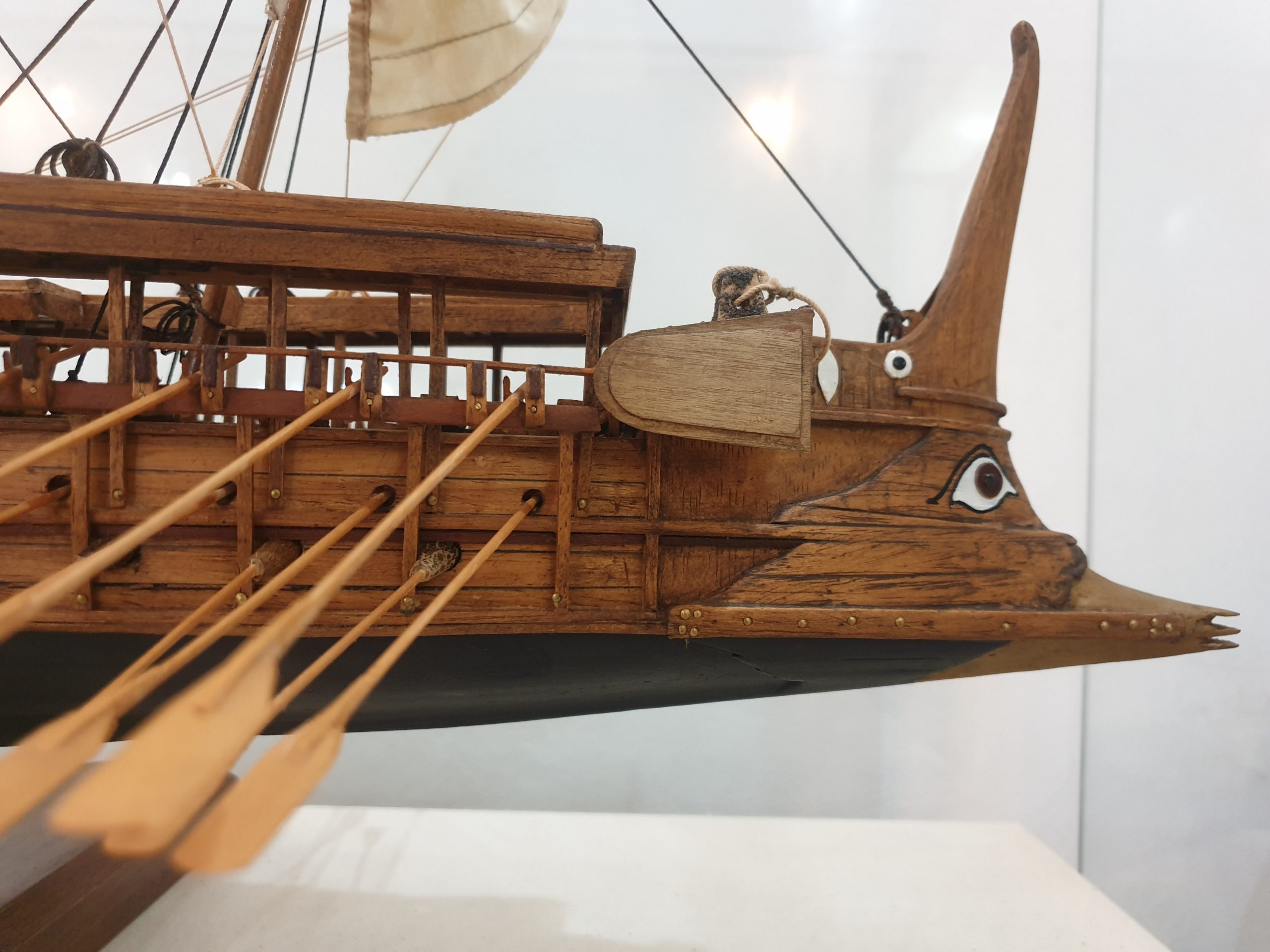 The KNVTS has a proud tradition to connect its vision on the future with a view on the historic past of shipbuilding practice. Time for the chair of the KNVTS Ship of the Year Committee Rien de Meij to take a step back and reflect on the idea of “vision”. Here is the story of “Fast and sacred ships”.

The fast and sacred triremes that are the subject of this article are the fifth and fourth century ships of Athens that served in diplomatic missions. The Paralos was the most well-known sacred ship of the Athenian Navy.

Possibly the ship was named after the beautiful shores that she visited [paralos; sea-side] [1]. Others say that the name Paralos relates to the tribe, the Paraloi, from whom the crew was selected [2]. Or possibly the ship was named after the eponymous hero for whom a shrine [heroon] existed in the seaport [epineion] of Athens, Piraeus, which was the home port of the ship [3]. All we know, is that the vessel was called the Paralos and its crew were called the Paraloi [4].

These fast government ships served in sacred embassies – conveying the Athenian deputies to the Festival of Delos – and took part in the boat races during festivals. As state vessels, they also served as scout and messenger ships, delivering official state messages. When present in the line of battle they carried the admiral of the fleet.

The missions of the sacred triremes were not directed against enemies however – for that there were troops and the fleets – but firstly against offenders among the Athenian citizens; consider generals abroad who were slack in paying what the Athenian government was due. In such cases three principal instruments of punishment were considered: a special decree, impeachment, or the Paralos [5].

An embassy for the sacred triremes of Athens usually involved the transport of money and persons. Their reputation was that they served urgent needs only, conform to what Plutarch tells us that Critolaus believes: ‘ought to employ himself in the chiefest and greatest affairs, like the King of the universe, who, as Euripides says, ‘Reserves great things for his own government, but small things leaves to Fortune’s management’ [6].

According to tradition, an elaborate model of the Paralos took part in the Panathenaic procession [8]. For this purpose, a modeled boat [skaphos] was fitted with wooden poles athwart [epikarsios], which were pushed against by dedicated priests and priestesses, “all of them Eupatrids, crowned with garlands, some of gold, others of flowers” [9, 10, 11].

The modelled sacred trireme [hiera triērēs], in its role as Panathenaic Ship, was then led from the Dipylon gates towards the propulaia, which form the entrance to the Acropolis [12]. It moved stately and high in the air ‘as if from some calm harbor [limēn]’. Next, the ship-chariot proceeded through the middle of the thoroughfare, which has the stoas arrayed on either side of it [13].

The ship was then led to the Acropolis, where according to the Greek sophist Himerius ‘an ode will release the ship’s cables, which ode the Athenians sing as a sacred chorus [khoros], summoning the wind for the ship that it would be present and fly in the manner of a sacred ship’. The sacred chorus would follow with the singing of lyric poetry [mélos] which, ‘as if sending a fair wind, blows against the stern and thus drives the ship by the breeze’ [14].

He describes how the sacred Athenian ship was driven by ‘clear-voiced breezes from Attic flutes, resounding clearly and driving the ship onward’ across land, moving as easily as if land had turned to water just as the Nile floods Egypt turning it into an inland sea [15].

The historic sacred ship Paralos was not under command of the usual triarch [triērarchos], but of a high-level magistrate called the tamias [16]. The tamias of the Paralos was an official elected treasurer, who added to the Paralos’ reputation of ‘the people’s cudgel’ [rhopalon] [17, 18].

The dedicated tamias controlled the cost of the ship’s maintenance and of the payments to the crew, which were all funded by the polis. He was the custodian of the equipment of the ship with financial and operational responsibility for the constant availability of the tools, sails, ropes, screens, anchors ,and possibly even the stock of ophthalmoi (marble eyes) that he kept in an arsenal [skeuotheke] on the Acropolis, presumably in the Chalkotheke [19]. Later, the Salamina was replaced by the Ammonas to which then also a treasurer was assigned [20]. Side view of the aft body of an Athenian trireme, 5th century [21].

To illustrate how the sacred triremes were put to use is the story of how the Salamina sailed to Sicily with orders to transport general Alkibiades and certain others back to Athens, to answer the charges which the state had brought against them [22].

In 415 BCE, Athens prepared an expedition to support the Sicilian city of Segesta in the war against Selinus and Syracuse. This expedition was under command of General [Stratēgós] Alkibiades, the beautiful and brilliant member of the jeunesse dorée of Athens; pampered rich sons who, under the influence of the sophists’ movement, with all sorts of wanton behavior indicated their displeasure with the value system of Athens [23].

The night before the fleet was to leave, a large number of Athenian hermai were mutilated [24]. Alkibiades and his friends, a group called the hetaireiai, were accused of this vandalism, but not charged [25]. The Athenian fleet under command of Alkibiades set sail as planned and proceeded to Sicily. There, however, they found the state vessel Salaminia, coming from Athens with orders for Alkibiades to sail home and to answer the charges which the state had brought against him and certain other soldiers [26].

Alkibiades agreed to follow the Salamina with his own ship, but at Thurii [Thourioi] in southern Italy, he changed his mind and his course, escaped and sought refuge in Sparta. There he promised to help the Spartans according to the familiar saying, ‘the more harm I did you as an enemy, the more good can I do you as a friend. For I know the secrets of the Athenians, while I could only guess at yours’ [27].

The well-paid crew of the Paralos, the Paraloi, was made up entirely of Athenians and freemen which were known for their outspoken pro-democracy views [28]. In 411 BCE, they had been instrumental in preventing an oligarchic coup at Samos:

‘Chaereas, the son of Archestratus, an Athenian, who had been active in the movement, was quickly despatched in the ship Paralus by the Samians and the army to Athens, there to report the defeat of the Samian oligarchy, for as yet they did not know that the government was in the hands of the Four Hundred [29]. No sooner had he arrived than the Four Hundred imprisoned two or three of the Parali, and taking away their ship transferred the rest of the crew to a troop-ship which was ordered to keep guard about Euboea. Chaereas, seeing promptly how matters stood, had contrived to steal away and get back to Samos, where he told the soldiers with much aggravation the news from Athens, how they were punishing everybody with stripes, and how no one might speak a word against the government; he declared that their wives and children were being outraged, and that the oligarchy were going to take the relations of all the men serving at Samos who were not of their faction and shut them up, intending, if the fleet did not submit, to put them to death. And he added a great many other falsehoods’ [30].

In that same year 411 BCE, the triarch Dicaeogenes, who, having sailed out as commander of the Paralos, had died at the Battle of Knidos (411 BCE) [31]. The last battle of the Peloponnesian War

After playing all thinkable and unthinkable roles, all unscrupulous, Alkibiades retired to the Thracian Chersoneses. A poorly protected location near the mouth of the Aegospotami, the “goat-river”, close by his castle, became the scene for the last battle of the Peloponnesian War [33]. In this battle (405 BCE) the fleet of Athens was defeated and captured by the Spartan admiral Lysander:

‘These men, sailing with Lysander in the swift ships, humbled the might of the city of Cecrops. And made Lacedaemon of the beautiful choruses the high city of Hellas” [34].

After the battle, ten ships managed to escape the massacre: one ship in which Alkibiades escaped; the ship of the Athenian general Conon; the Athenian sacred trireme Paralos, and seven other ships [35]. Eight ships fled to king Euagoras of Cyprus, fearing the judgment of the Athenian people. The Paralos was dispatched to inform Athens of the defeat, ‘its arrival setting off a citywide panic’ [36].

The outcome of this battle ended the Athenian thalassocracy, the supremacy at sea. Less than one year later, on April 25, 404 BCE, Athens, full of refugees and weakened by plague and hunger, capitulated to Sparta, thus ending the Peloponnesian War. Top view of the forebody of an Athenian trireme, 5th century BCE [37].

Much later, in 350 BCE, the Athenians were thinking of sending a fleet to foreign parts, to carry out a naval campaign. Alciphron’s Letters provides this account:

‘Have you heard the important news, Scopelus? The Athenians are thinking of sending a fleet to foreign parts, to carry on a naval campaign. The Paralus and Salaminia, the swiftest vessels afloat, leading the way, are already unmoored, and have taken on board the commissioners who are to settle the time and starting point of the expedition’ [38].

In 344 BCE, on Timoleon’s departure for Syracuse, the Corinthians equipped two sacred triremes which they named after the “two goddesses”; Demeter and Persephone. By doing this, Timoleon made the dream come true of the priestesses of Persephone, who ‘fancied that they saw in their dream the goddess and her mother making ready for a journey and heard them say that they were going with Timoleon to Sicily’. On the night voyage from Corcyra to the Italian coast, the trireme was illuminated by a light from heaven; a fair confirmation that the goddesses took part in the expedition [39].

Lastly, there is the story that when Alexander the Great had captured Tyre (332 BCE), now ready to start up his travel towards the interior of Mesopotamia, the state vessel Paralos came to him from Athens. The envoys and crew of the Paralos then engaged in an embassy. ‘These men obtained all the requests which they were despatched to make, and the king gave up to the Athenians all their fellow-citizens who had been captured at the Battle of the Granicus River’ [40].

According to some ancient sources, the Paralos was depicted by the ship-painter Protogenes, on a very famous site at Athens: the gateway [propulaia] of the Temple of Athens. According to J.G. Frazer:

‘Protogenes painted a famous picture of Paralus and Hammonias in the Propulaia at Athens; the figure of Hammonias was by some called Nausikäa [41]. The picture was still at Athens in the time of Cicero (In Verrem, 4.60). Paralus and Ammonias (Hammonias) were the names of the two warships which the Athenians employed on occasions of ceremony and in services of special urgency. The old name of the Ammonias was the Salaminia; it seems to have been exchanged for Ammonias in compliment to Alexander the Great when he assumed the title of ‘son of Ammon’ … It is supposed that in the picture by Protogenes the Paralus was personified as a mariner and the Ammonias as a young woman, and that ignorant people mistook the figures for those of Ulysses and Nausikäa … K.O. Müller conjectured that this picture by Protogenes was the one here described by Pausanias, and that Protogenes’ name has dropped out of Pausanias’ text’ [42].

Picture (top): Side view of the forebody of an Athenian trireme, 5th century BCE [7].

This is the twelfth in a series of articles written by Rien de Meij. An abbreviated version of this article was published in SWZ|Maritime’s February 2021 issue. The other articles are: