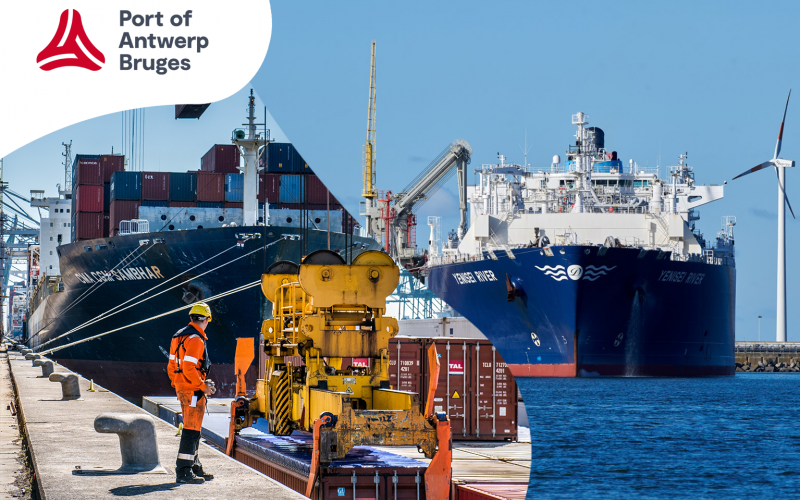 The City of Antwerp and the City of Bruges have reached an agreement to merge their ports. The combined port, to be named Port of Antwerp-Bruges, may overtake Rotterdam as Europe’s largest container port.

The two Belgian ports announced on Friday 12 February that, after about a year and a half of negotiations, they have reached an agreement on a merger of their port companies. Antwerp will have an 80.2 per cent interest, Bruges 19.8 per cent.

‘We are proud of this historic agreement, which seals a long-awaited unification,’ comments Antwerp’s port alderman Annick de Ridder.

The merger will allow the ports to strengthen their position within the global supply chain and continue their course towards sustainable growth, the ports state. Unified, they will also be more resilient to the challenges of the future and take a lead in the transition towards a low-carbon economy.

Whereas the Rotterdam container transshipment has had to give way considerably in the past year as a result of the corona crisis, Antwerp still managed to record a slight growth in TEUs to just over twelve million TEUs, and the number of tonnes remained the same at 139 million. In Zeebrugge, the transshipment itself increased by more than ten per cent to 1.8 million TEU and eighteen million tonnes. The final numbers for Rotterdam over the whole of 2020 are yet to be published.

However, as the Ports of Antwerp and Zeebrugge say, unifying a port is more than a story of tonnes and volumes. The ambition is to become the world’s first port that reconciles economy, people and climate. The unification is about creating added value for the surrounding areas of Antwerp and Zeebrugge, for customers and stakeholders, as well as for the rest of Flanders.

‘Port of Antwerp-Bruges will combine the best of both worlds and will focus on the strengths of each site. The ports of Antwerp and Zeebrugge are largely complementary. Antwerp specialises in the handling and storage of containers, break bulk and chemical products, while Zeebrugge is a major port for RoRo traffic, container handling and the transhipment of liquid natural gas. Working more closely together will make it possible to consolidate sustainable growth, not only of each port’s individual market share but also of the joint market share of both ports together’, the new partners say.

In order to maximise the added value of the unified port, Port of Antwerp-Bruges will optimise the interconnectivity between the two ports. The transportation of goods by rail between the two sites will be bundled, estuary traffic (by inland vessels on the North Sea) will be optimised and pipeline connections will also be on the list of priorities.

The signing of the agreement last week marked the beginning of the merger process between the two ports. This process is expected to be finalised in one year time.