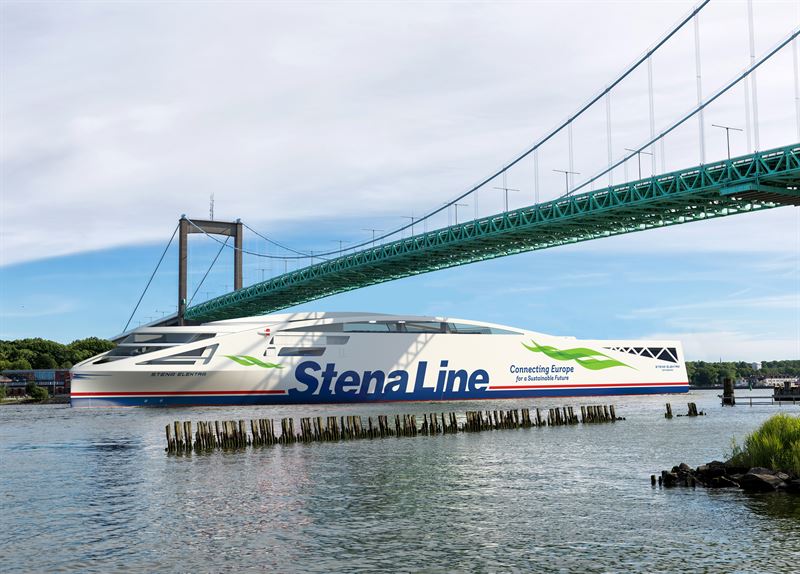 Stena Line plans to start operating two fossil-free battery powered ferries on the route between Gothenburg and Frederikshavn in Denmark no later than 2030. Stena Elektra is to be the world’s first fossil free RoPax vessel of its size. At about 200 metres, it has a passenger capacity of 1000 and 3000 lane metres freight capacity.

Stena Line is also looking into combining the electrification with other alternative fossil free fuels such as fuel cells, hydrogen and bio methanol for a longer range of the vessels.

‘We now move from vision to vessel with the battery powered vessel Stena Elektra,’ says Stena Lines CEO Niclas Mårtensson. ‘Within a year we will present the outline specifications and at the latest by 2025 we plan to order the first vessel. This will be a huge step towards fossil free shipping.’

Mårtensson revealed the plans during a press conference about the industry collaboration project Tranzero Initiative, in Gothenburg on Thursday 4 February.

In an effort to speed up the transition to fossil-free fuels in the transport sector, Stena Line together with Volvo Group, Scania and the Port of Gothenburg have joined forces in the Tranzero Initiative collaboration project to bring about a significant reduction in carbon emissions linked to the largest port in the Scandinavia. The aim is to cut emissions by seventy per cent by 2030 in the Port of Gothenburg.

Mårtensson: ‘The electrification of shipping has only just began. We see a great potential for both battery hybrids and battery powered vessels on several of our short-sea shipping routes in the future. But, it takes more than the electrical ships, we also need to develop the infrastructure and charging possibilities in the ports and terminals in the same pace and that is a reason why collaborations projects like this are so important.’

Also read: Stena plans to use recycled batteries in charging stations at ports

Since 2018 Stena Line is operating the battery hybrid vessel Stena Jutlandica on the Gothenburg-Frederikshavn route, using battery power for manoeuvring and powering the bow thrusters when the ship is in port. The batteries are charged with green shore power in the port of Gothenburg as well as during operation. According tot the company the CO2 emissions are lowered by 1500 tonnes per year, equal to the emissions from 600 cars per year.