Why does allowing private security on board Dutch ships take so much time? 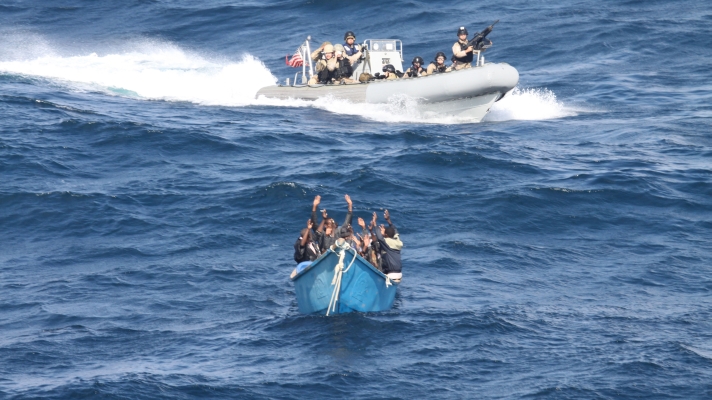 Piracy is on the rise, and, yes, it is on the political agenda both nationally and internationally, admits Cathelijne Bouwkamp, specialist in maritime law and security at the KVNR. Yet, there are so many hurdles to clear, that Dutch shipowners likely have to wait until 2022 before they can hire private security. The fact that the Gulf of Guinea is the new piracy hotspot complicates the matter further. The International Maritime Bureau (IMB) recently reported piracy and armed robbery increased in 2020, with the Gulf of Guinea an area of particular concern. This area recorded its highest number of kidnappings to date. ‘So for our members, piracy is a source of great concern,’ says Bouwkamp of the Royal Association of Netherlands Shipowners (KVNR, picture on the right).

Bouwkamp: ‘What we see is that the Dutch shipowners that do sail in such areas all take BMP measures. Sailing in high-risk areas without such measures, is simply a risk you cannot take.’ BMP stands for Best Management Practices to deter piracy and enhance maritime security. For the Gulf of Guinea there is a special BMP, the BMP WA (West Africa), which indicates the seriousness of the situation there. The EU Naval Force provides examples of such measures in the picture below.

‘We also see that some shipowners simply decide not to sail there anymore,’ continues Bouwkamp. ‘In any case, the decision to take a contract that requires sailing through the Gulf of Guinea for example, is now generally a decision at board level, so not one that is taken lightly.’

In 2018, the Dutch House of Representatives adopted the Merchant Shipping Protection Act (Wet ter Bescherming Koopvaardij), which will allow Dutch shipowners to hire private security to protect their ships. The law was adopted by the Senate at the beginning of 2019. But the law is yet to enter into force. Why?

In July 2020, Dutch Minister Grapperhaus of Justice and Security said underlying regulations still needed to be established, existing laws had to be adjusted and the Environment and Transport Inspectorate had to prepare for tasks of licensing, supervision and enforcement. To the dismay of the KVNR, he said the law would enter into force no later than 1 January 2022. ‘Much too slow,’ is all Bouwkamp wants to say about the process.

Since laws in the Netherlands can only enter into force on 1 January and 1 July, the KVNR urged the Minister to at least make haste to make the 1 July deadline. Bouwkamp considers the chance of this being achieved to be small, but possible

‘You see, the delay has already occurred earlier (for the reasons as stated by the Minister above, Ed.). As the existing law also has to be adjusted, the modified version needs to go through the entire law-making process of government and parliament. You simply cannot speed this up. To enter into force, everything concerning the new law needs to be published by 30 April at the latest for entering into force on 1 July 2021. It is a very tight schedule, but it still can be done.’

The other option Dutch shipowners have is to deploy Vessel Protection Detachments (VPDs) provided by the Ministry of Defence. A VPD consists of eleven soldiers. However, this solution has several disadvantages from the point of view of flexibility, size and cost.

As processing a request for a VPD takes a lot of time, it is sometimes impossible to deploy a VPD on board a ship on time. Particularly in the spot market, in which many Dutch ships operate and in which transports have to be carried out within a few days, it is difficult to arrange for VPD deployment on time.

Because private security is not allowed, the ships sailing under the Dutch flag are placed outside the international level playing field

In addition, because a team consists of eleven soldiers, there is sometimes no accommodation for the team on board the often relatively small Dutch ships. Finally, a VPD costs 5000 euros per day and this amount is quite high compared to the costs of private security companies. Bouwkamp: ‘Because most flags allow the use of private companies this amount places the ships sailing under the Dutch flag outside the international level playing field.’

Then there is a question of location. Piracy in the Gulf of Aden (off Somalia) has dwindled over the last years thanks to naval patrols in the area and armed (private or military) protection on board ships. However, tackling piracy in the Gulf of Guinea is a whole different ball game.

In the absence of a central government due to an ongoing civil war, Somalia became a so-called “failed state”. In addition, the Gulf of Aden is a transit route, meaning a lot of ships need to go through it. The Gulf of Guinea is not a transit route, but is visited by ships on their way to certain ports and it crosses the territorial waters of different countries, such as Nigeria, Liberia, Ghana, Cameroon and Angola, all with their own capable governments.

To deploy frigates in the area or put military personnel on board a ship, the government ruling the territorial waters needs to agree to this. Bouwkamp: ‘This makes the playing field significantly more complex and getting more security in the area a long, mainly diplomatic process.’

Bouwkamp explains this also means Dutch ships do not take VPDs on board in this area at this time. ‘As VPDs are constitutional teams, local governments have to agree to their deployment on their territory. The Dutch government should work on this, however.’

This makes the playing field significantly more complex and getting more security in the Gulf of Guinea a long, mainly diplomatic process

In addition, she says the piracy hotspot now being in the Gulf of Guinea also impacts the Merchant Shipping Protection Act. ‘The government should make sure the new law will also be applicable to this area as it initially targeted the Gulf of Aden.’

However, all these difficulties do not mean nothing is being done. Bouwkamp: ‘Two weeks ago, the Coordinated Maritime Presences concept was officially launched. It is a cooperation of European countries, not in an EU context, to work together in the Gulf of Guinea. Three frigates of different countries are patrolling the area and work together in sharing information and covering the area. In November and December, this cooperation already successfully intervened for some ships under pirate attack or threatened by pirates.’

Yet, the Netherlands is not taking part in this project yet. ‘I would like to see the Netherlands get involved in this one way or another. They were at the table,’ says Bouwkamp, ‘but they do not have naval ships available in the area at the moment. The KVNR shareda report about the presence of Dutch flagged vessels in the Gulf of Guinea and based on this and the recent violent developments, the government is now looking at how it can get involved in fighting piracy. We hope to discuss this further with them within the coming month.’