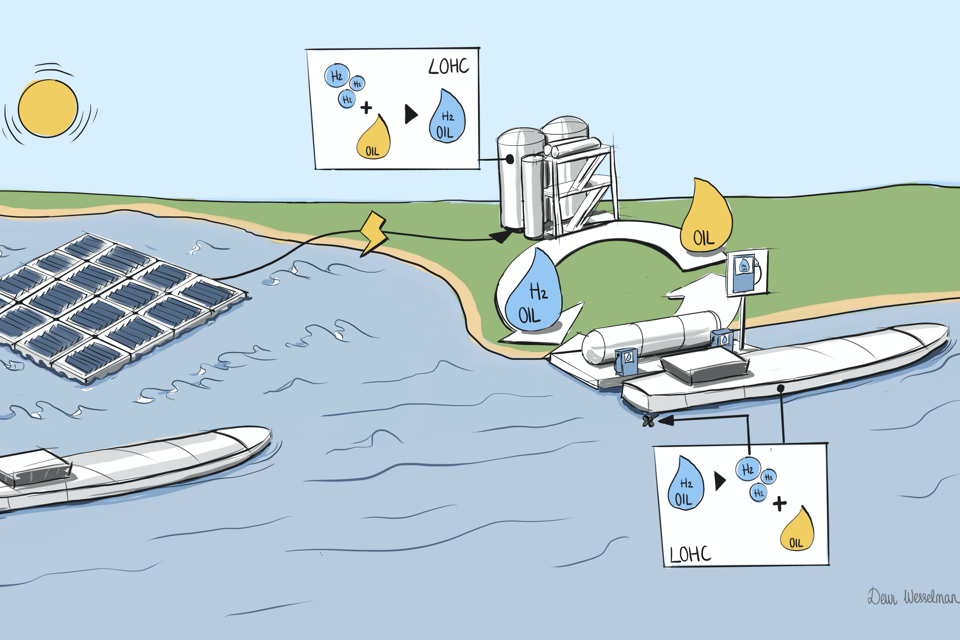 SolarDuck and Voyex have revealed plans that allow ships to be powered by hydrogen and refuelled at seaworthy floating solar islands. A prototype of such a solar island will soon be on display on the river Waal near IJzendoorn, a Dutch first.

The Province of Gelderland supports the innovation with a subsidy of 350.000 euros. Dekker will facilitate the project by offering space. Goal of the project is to make inland shipping more sustainable.

There won’t be a need for fuel transport because refuelling takes place right at the source: the floating solar island on the Waal on which testing will commence in April 2021. ‘The innovative power lies in combining technologies,’ says Koen Burgers, CEO of SolarDuck. ‘If upscaled, a solar island at sea and on rivers can offer the shipping sector a sustainable alternative.’

The test setup at Dekker in IJzendoorn will be the first of its kind in the Netherlands. SolarDuck will supply the solar island: four linked platforms containing 39 solar panels each. These modular platforms are suited for the rough conditions found at sea, but will first be tested on the Waal to look at the effects of strong currents and heavy winds.

‘At the beginning of April, the entirety of the solar island will be towed upstream from Gorinchem to Dekker’s riverport in IJzendoorn. A unique event in itself!,’ Burgers assures.

The floating solar island, which produces 65 kilowatts of peak power, is connected to a 10 kilowatt electrolyser that produces hydrogen. The hydrogen is bonded to a “Liquid Organic Hydrogen Carrier” (LOHC), an oil-like liquid which serves as a binding agent, or carrier, for the produced hydrogen.

‘This “hydrogen-oil” can be transported at room temperature, under the same atmospheric conditions as fuels such as diesel,’ explains Wiard Leenders, CEO of Voyex. Furthermore, part of the test setup is the manner in which the hydrogen is released from the oil and subsequently used to generate power on board.

‘The carrier itself can be reused,’ Leenders adds. This means that the entire energy grid up to and including the sailing on safe hydrogen is within reach.

The project is named “The Atoll”, referring to the movie “Waterworld”, in which an artificial man made island supplies in its own energy needs. Both companies have the long-term ambition, although within their own respective angle of approach, to produce hydrogen using floating solar islands at sea to supply both the shipping sector and other heavy-duty applications.

Dekker in IJzendoorn encourages the use of hydrogen for the transport sector. ‘Our floating sand extracting plants have already been made much more sustainable, however we are still looking for a solution for our fleet,’ states Gert Pomstra, group director of Dekker. ‘We wholeheartedly support the innovation of SolarDuck and Voyex, and hope this will contribute to making inland shipping more sustainable.’

The total size of the project is approximately 1 million euros. The Province of Gelderland awarded it with a subsidy of 350,000 euros.