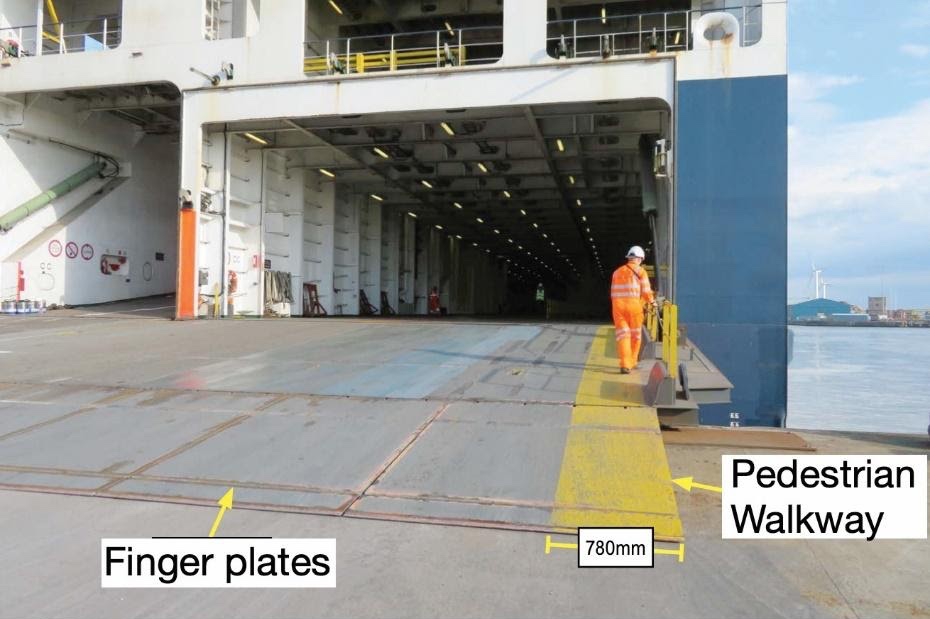 The potential for mobile phones to cause distraction in onboard workspaces has yet to be fully recognised and addressed by the marine industry, says The Nautical Institute after a fatal accident on board a ro/ro vessel. The incident involved a crew member taking a personal call while standing on the stern ramp.

Semi-trailers were being discharged from the hold of a ro-ro vessel by tractor units belonging to the terminal. A tractor was pushing a semi-trailer up the lower vehicle deck ramp and then down the vessel’s stern ramp and onto the quay. One of the vessel’s officers, dressed in an orange boiler suit, was standing near the stern ramp. He started a personal call on his mobile telephone. While he was talking, he walked along the starboard side of the main vehicle deck and on to the starboard side of the stern ramp.

As the officer talked on his phone, he remained standing on the stern ramp’s starboard side, gradually moving down the ramp towards the quay with his back to the vessel. Meanwhile, the semi-trailer being pushed down the ramp was approaching. Another tractor driver, in his cab on the quay, saw the danger and sounded his horn to give warning.

Approximately three seconds later, the rear of the semi-trailer struck the victim, fatally injuring him.

The official investigation found that the tractor driver’s view ahead was blocked by the semi-trailer; the victim would not have been visible to him. Furthermore, he was not expecting pedestrians to be standing on the ramp directly ahead of his vehicle.

The victim had probably not heard the semi-trailer approaching as the sound of the tractor’s reversing alarm and its engine would have been masked by the ambient noise of the vessel. Also, the reversing alarm would have been absorbed or reflected to some degree by the semi-trailer between the tractor and the victim, to say nothing of the victim holding a phone to his ear and being absorbed in a conversation.

This accident was covered in the Mars Reports, originally published as Mars 202067, that are part of Report Number 338. A selection of this Report has also been published in SWZ|Maritime’s January 2021 issue. The Nautical Institute compiles these reports to help prevent maritime accidents. That is why they are also published on SWZ|Maritime’s website.