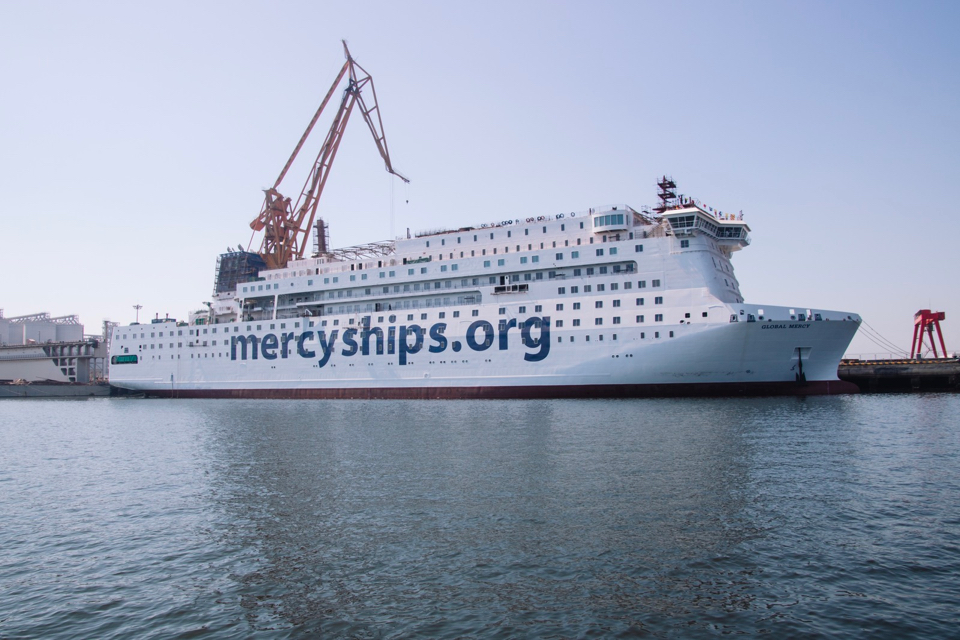 Construction of the world’s largest non-governmental hospital ship, the Global Mercy of medical aid organisation Mercy Ships, is nearing completion. The ship will head to Europe this spring for additional outfitting and will visit Rotterdam before heading to Africa.

The ship will first head to the Port of Antwerp, where final outfitting will take place. This includes the installation of medical equipment, systems and core crew and is expected to take several months. The ship is then expected to sail for the Port of Rotterdam in the Netherlands in the autumn for a two-week visit, after which it will make its maiden voyage into service within Africa.

Mercy Ships has plans for a festive reception of the Global Mercy in Rotterdam. Relationships from all over the world will have the opportunity to admire the ship from the outside and the inside – depending on the corona measures then in force.

‘The Global Mercy is a unique ship,’ says Marianne Havinga, director of Mercy Ships in the Netherlands. ‘It is a complete hospital ship, equipped with modern technology and tailor-made instruments. This enables us to provide care of the highest quality to the poorest in the world. At the same time, it offers volunteers an excellent opportunity to use their talents in service and gain a special experience.’

The Global Mercy is the first Mercy Ships vessel to be designed and purpose-built as a hospital ship and will be the largest of its kind in the world. Previous ships, including the current 16,572-gross-tonne Africa Mercy, have all been transformed into hospital ships after previously serving other purposes.

The Global Mercy is 174 metres long and weighs 37,000 tonnes. It has six operating rooms and will accommodate more than 600 volunteers from around the world representing many healthcare disciplines including maxillofacial, orthopaedic, reconstructive, ophthalmic and oral surgeons along with maritime personnel, cooks, teachers, dentists, electricians, agriculturalists and more.

The Global Mercy will join the current hospital ship the Africa Mercy, more than doubling the impact of Mercy Ships volunteers and services.

In addition to providing surgeries, Mercy Ships is increasingly focusing on training medical professionals within Africa. In this way, partnership to support the increase of healthcare objectives in Africa is structurally supported and improved.

That is why the Global Mercy is equipped with state-of-the-art training rooms, including a simulation laboratory with virtual and augmented reality. In addition, the ship also has a simulation room that allows trainers to approximate local conditions and constraints to prepare volunteers as well as possible for local conditions with limited resources.

Need for healthcare greater than ever

According to the Lancet Global Surgery 2030 Report, an estimated 16.9 million people die each year from lack of access to surgical care. More than 93 per cent of the population of sub-Saharan Africa does not have access to safe and timely surgical care. As Covid-19 threatens the stability of already fragile healthcare systems worldwide, the need for lifesaving basic care is greater than ever, according to Mercy Ships.

The Global Mercy will provide a safe and clean medical environment when visiting ports within West and Central Africa. Over its expected life of fifty years, it is estimated that more than 150,000 lives will be changed onboard by surgery alone.