Master with the con and steering in darkness, vessel scrapes channel side 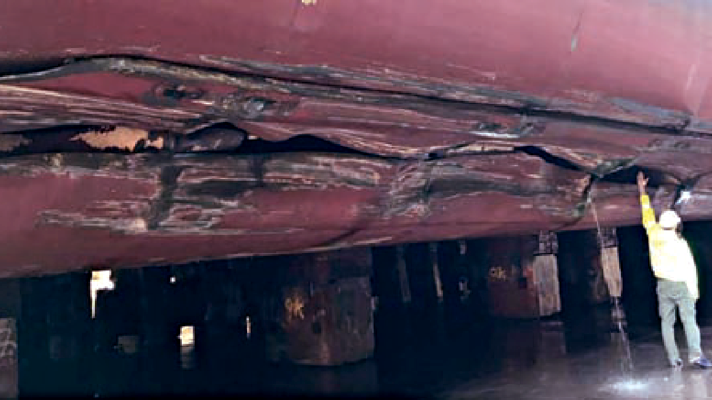 An overload of work processes can contribute to losing situational awareness. The Nautical Institute emphasises this point in a recent Mars Report. In it, a ferry ended up with a ten-metre tear in its hull because a master had too many balls to keep in the air.

A roro freight ferry was underway in darkness, outbound from a port in restricted waters. The master, who was new on board, had the con. The officer of the watch (OOW) and another officer were also on the bridge. With a planned course alteration coming up, the master switched from autopilot to hand steering, which he took himself (point two in the diagram). The vessel was now making about 14.5 knots and the master was navigating principally by visual means.

Shortly afterwards, a prolonged loud noise and a shuddering vibration was heard and felt throughout the vessel (point 7 in the diagram). An inspection later determined that there was significant damage to the ferry’s port side, including a ten-metre tear near the turn of the bilge; adjoining spaces had flooded to the waterline.

The ferry quickly developed a 7° port list. It was established from the ballast computer that seawater had entered the port heeling tank. Ballast transfer was commenced to return the ferry upright. This accident was covered in the Mars Reports, originally published as Mars 202061, that are part of Report Number 337. A selection of this Report has also been published in SWZ|Maritime’s December 2020 issue. The Nautical Institute compiles these reports to help prevent maritime accidents. That is why they are also published on SWZ|Maritime’s website.