Ocean Cleanup partners with Konecranes to extract plastic from rivers 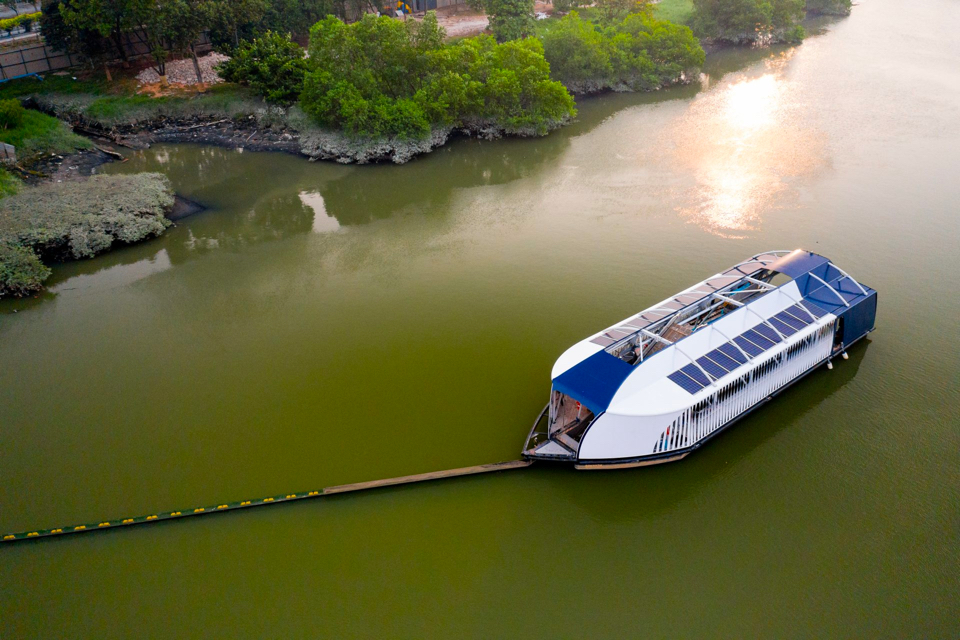 The Ocean Cleanup, the organisation of the Dutch inventor Boyan Slat, has entered into a collaboration with Finnish Konecranes. This company will produce series of devices that extract plastic from rivers before it reaches the ocean.

According to the Dutch organisation, the collaboration is an important step towards tackling the 1000 most polluting rivers in the world. These rivers, which account for one per cent of the total number of rivers on earth, account for eighty per cent of the plastic that ends up in the oceans, Slat calculates. ‘Rivers are the veins of the oceans.’

The first prototype of the Interceptor was unveiled at the end of last year. Copies of the floating machine are already at work in Malaysia, Indonesia and soon in the Dominican Republic and Vietnam. A fifth and sixth Interceptor are in the making. In about a year and a half, The Ocean Cleanup and Konecranes hope to increase production.

Interceptors 005 and 006 being manufactured side by side at Konecranes’ MHE-Demag.

Konecranes is a multinational company specialised in the production and service of cranes and lifting equipment. The advantage of working with such a large company is that they can produce on an industrial scale and have an international network that can be used for maintenance, says the founder of The Ocean Cleanup. ‘Our goal is not to build an empire.’ On the contrary, the organisation seeks cooperation with others. ‘This means it goes faster than if we were to do everything ourselves.’

The Interceptor follows the plastic catcher with which The Ocean Cleanup tries to tackle the so-called plastic soup in the Pacific Ocean. An important difference is that no one is directly responsible for this, while rivers belong to the territory of countries. Slat therefore hopes to cooperate with governments.

According to him, they have every reason to want to remove the plastic from their rivers, because that causes a great deal of damage not only ecologically, but also economically. For example, to fishing and tourism. The earnings model is still being worked on.

Slat emphasises that The Ocean Cleanup is a non-profit organisation. It has to cover the cost, but does not have to make a profit. Konecranes sees opportunities to make the cooperation profitable, says top executive Rob Smith. In addition, the company is ‘proud of the cooperation’ because of its sustainable objectives.

In the end, The Ocean Cleanup hopes to become superfluous. ‘That will take some time,’ says Slat. He would like to see plastic collected and recycled just as well as aluminium in a few years’ time. In addition, the inventor believes that plastic production should change in such a way that plastic no longer causes damage if it does end up in the environment.