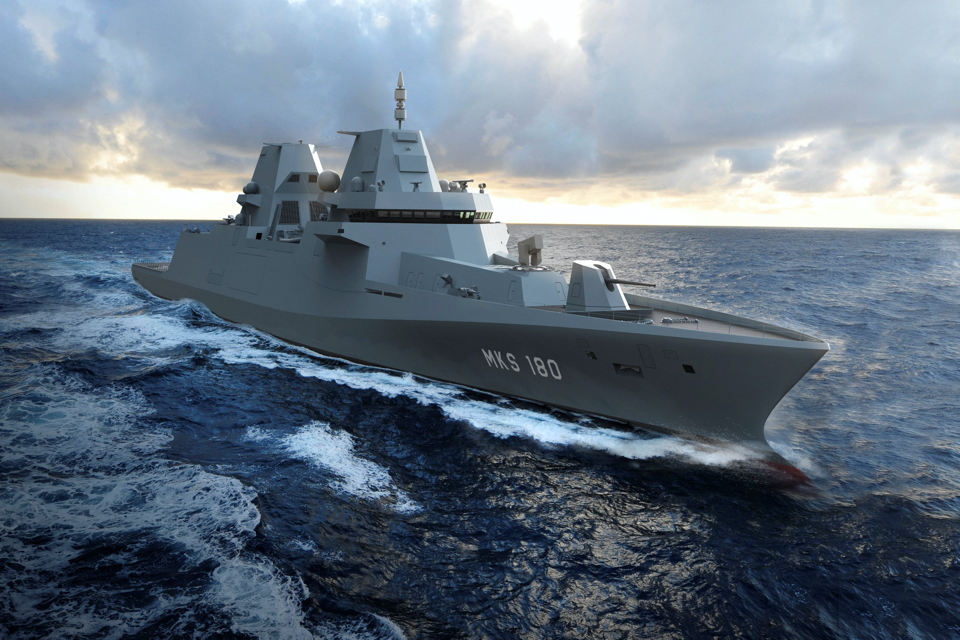 If the navy wants to remain relevant and up-to-date in these times of rapid technological developments, cooperation is necessary and inevitable. At a national level, Dutch Naval Design was established this year and at a European level Damen Shipyards was put in charge of a consortium in which all European naval yards are represented. Furthermore, a Dutch-German consortium was chosen for the German frigate project MKS 180.

On March 11 of this year, the new partnership Dutch Naval Design was established as a successor to the somewhat stagnating Knowledge Covenant between the Ministry of Defense and the Dutch naval cluster. The letter of intent was signed by the Defense Materiel Organisation (DMO), TNO, NLR, TU Delft, MARIN and the Netherlands Institute for Defense and Security (NIDV) as a representative of the industry.

The mission statement has been formulated as follows: ‘To achieve a decisive operational effect, by intensifying research, design and production within the Golden Ecosystem (formerly Triangle) of the Dutch naval cluster, now and in the future.’

Synergy of capacities in research institutes, industry and defence organisations is required in order to be in step with the current rapid technological developments and to apply them in the domain of the Navy. The Multi-Year Mission-driven Innovation Programme (MMIP) of Defence will serve as a guideline. The topics contained herein have been used by TNO to formulate the following Roadmaps specifically for the platform:

These roadmaps are being developed by working groups, which will define tasks and activities.

The European Commission has selected the SEA Defence project, with Damen Shipyards Group as coordinator, within the European Defence Industrial Development Programme (EDIDP 2019). The EDIDP, which paves the way for the European Defence Fund, focuses on the promotion of a strong and innovative defence industry as well as on raising the EU’s autonomy and technological leadership in defence.

Sea Defence’s proposal will now enter the next phase towards award of the project, which is likely to be effective later this year. Unique in this project is that the leading European naval yards, brought together within SEA Naval, a working group of SEA Europe association, have joined efforts to identify future technological challenges and opportunities in the research and capability domains for the next generation naval platforms.

SEA Defence is supported by participating EU member states and led by the Dutch Ministry of Defence. The research initiatives and capabilities derived thereof are to effectively result in strengthening European naval forces against potential future threats.

The consortium consists of the following partners:

The SEA Defence project will conduct a feasibility study in order to prepare a roadmap of technologies to be included in the next generation of naval platforms and pursued in further European development programmes. The study will address the following issues: lower detectability, higher survivability against modern surface and subsurface threats including against high-speed and swarming threats, reduction of ship motions, improved electric power generation and storage, capability to operate in extreme climates, topside and increased autonomy and automation.

For each area, the project will map the state-of-the-art technologies, and will assess the impact of ship integration on capabilities, budget and interfaces. It will also provide recommendations in order that the European naval shipbuilding sector can realise innovations ready for the next generation of naval platforms, from their design or during their lifecycle.

And last but not least, in June a contract was signed for the construction of four Mehrzweck Kampf Schiff (MKS 180) by a Dutch-German consortium: Damen Shipyard Group, Blohm & Voss and Lürssen. Damen is the main contractor and Thales Netherlands an important subcontractor. Hopefully, this will initiate further consolidation of the (North) European naval industry and reinforce naval cooperation between the German and Dutch defence organisations.

This article was written by SWZ|Maritime’s editor and naval expert Jaap Huisman, huisman19@kpnplanet.nl.

Picture: Render of the MKS 180 (by Damen Shipyards).