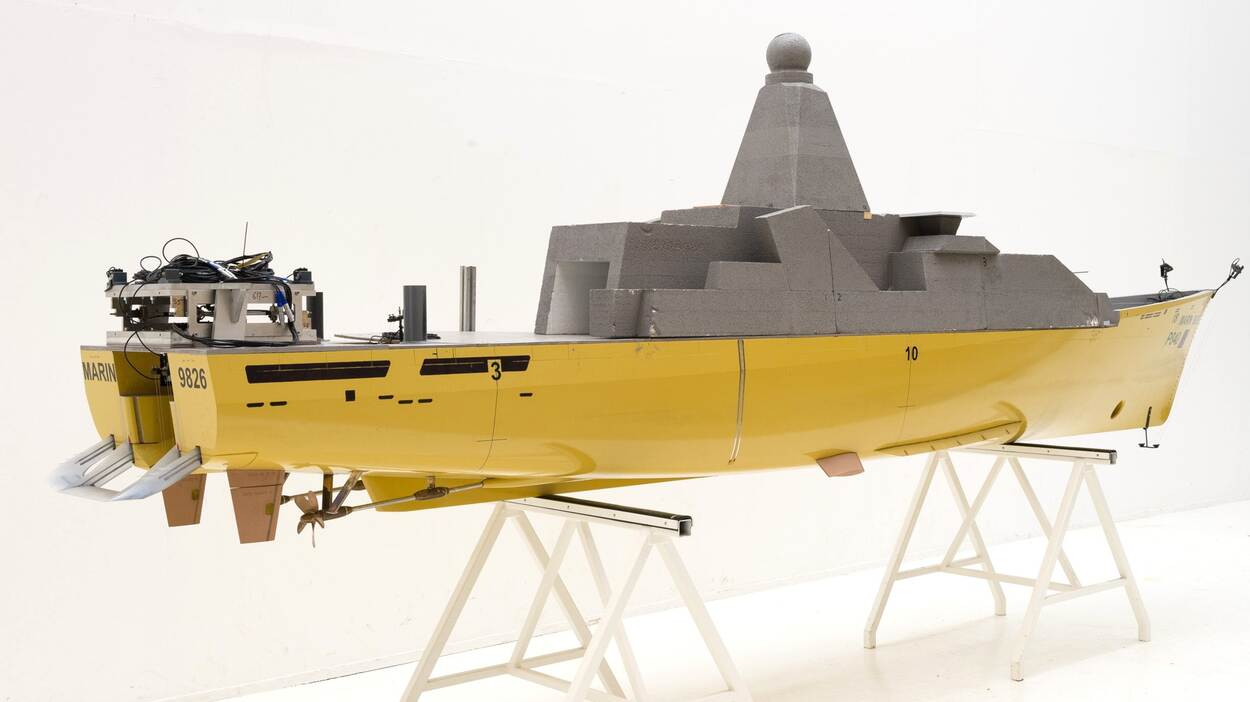 The Dutch Defence Materiel Organisation has ordered a Hull Vane for the 108-metre Oceangoing Patrol Vessel HNLMS Zeeland. It is the first time the hydrofoil-like device is placed on a naval ship and the first on a vessel over 100 metres in length. The Hull Vane reduces fuel consumption and increases comfort on board.

Sometimes called “underwater spoiler”, the Hull Vane converts energy from the stern wave and the ship motions into forward thrust. Hull Vane has been on the market since 2014 and has been applied on superyachts, patrol vessels, offshore ships and passenger vessels, but never on such a large naval ship. The wing will have a span of eleven metres and a chord length of two, making it probably the largest hydrofoil ever built.

The acquisition came after an extensive research project, in which the Hull Vane was first optimised using Computational Fluid Dynamics, and then tested extensively at MARIN in the model basin. The main benefit is the reduction in fuel consumption, expected to be at least ten per cent. This is not just an environmental and cost benefit, but it is also a tactical advantage at times when fuel can be scarce. The top speed will increase and the modification will reduce the stern wave, reducing its visibility from aircraft and satellites.

Seakeeping tests were carried out at Marin (by Dutch Ministry of Defence).

As the Hull Vane dampens the ship’s motions in waves, the helicopter deck will move less, making it easier to land in rough weather. The same applies for the slipway in the stern: as it moves less up and down, the launch and recovery of the FRISC (fast raiding interception and special forces craft) will be easier. Model tests have also indicated a significant reduction in bow slamming, leading to improved comfort on board. The helicopter deck will move less in waves (by Dutch Ministry of Defence).

An elementary role in funding the Hull Vane retrofit was played by MIND, short for Military Innovation by Doing. This innovation centre of the Defence Materiel Organisation has as objective to bring defence-related innovations to reality, even when they come from small companies, as is often the case. For Hull Vane BV, the fortieth Hull Vane order marks a big step. The company expects the naval market to be one of its main markets in the future, and with the Dutch Navy as launching customer in this segment, doors will be opened.

Picture (top): Model of the vessel used for testing (by Dutch Ministry of Defence). HNLMS Zeeland, one of four of the Holland-Class Oceangoing Patrol Vessels (by Dutch Ministry of Defence).